She viewed it as an opportunity to continue school with friends, but also to stay close to home. This perspective changed when she joined the Diversity Center as a Rieke Scholar.

The Rieke Scholarship is a grant-based scholarship for PLU students that are dedicated to change and knowledge to society. With her time now committed to being an advocate for the Diversity Center, she saw an opportunity not only to bond with her friends, but to also be exposed to topics she never had a chance to learn in the small town where she grew up.

“Getting to college, being exposed to history, and having to confront [not only] the material conditions for black, brown, and indigenous people in our country, but also the history of what our government has done and the way our systems and structures are still set up, is so important to what I do now.” 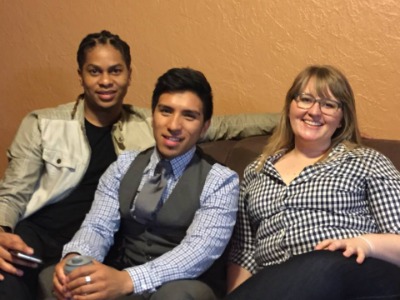 Katie always saw herself working in the field of social work, but she knew that if she were going to work with diverse people in the future she was going to have to understand complex topics from the perspective of the people who experienced them. This access to the knowledge and the experience of others is something she has a great appreciation for when reminiscing about her involvement with the Diversity Center.

For Katie, attention to equality and justice was instilled early on. She recalls her fathers’ morals commitment to these ideas, as well as his time as an active participant in the WTO protests of 1999 in Seattle. Yet, even if she wanted to emulate this, she says that, at the time, her generation didn’t have the confidence to speak up or spark change for society. Katie believes her generation was unaware of the power they wielded.

But, after her time in college, Katie grew more confident in her convictions and became the leader of the MLK Labor Group, an organization that prioritizes the rights and knowledge of workers. They also advocate on behalf of workers in order to spark legislative change.

Now, Katie is thankful for her time at the Diversity Center. She appreciates the chance she had to learn about different topics related to culture, equality, and justice. And, looking back on the newest generation, she’s proud to see it in good hands.

Katie says that the current leaders involved in the Diversity Center are a lot more adamant about their rights and the injustices that are present in today’s climate, they are taking more action compared to her generation.

“You guys have gotten the people involved now, have gotten braver, and are really, like I don’t know, trying to fight for more change and maybe take a bolder stance than we did and I think that’s awesome”.