Where are they now?

Our Alumni go on to do some amazing things, read about some notable alums below.

Justin Huertas has toured nationally with Spring Awakening. He has performed with Seattle Repertory Theatre and ArtsWest. Justin is accomplished cellist and budding playwright; he is currently under commission at Seattle Repertory Theatre for a performance piece chronicling five years’ worth of experience auditioning for, touring with, and ultimately starring in Spring Awakening. Justin earned a BFA in Theatre.

Aaron has worked at professional theaters across the Puget Sound including, The 5th Avenue, ACT, Showtunes, ArtsWest, Taproot Theatre, Centerstage and others.  In the Seattle area, he has honed his skills as an actor and singer. He received a Bachelor of Arts in Acting and Directing. 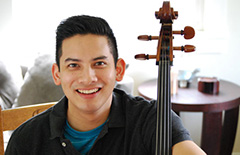 Huertas was ready to “break up” with acting and playing the cello to pursue a steadier paycheck, when fate stepped in.

Has performed for the last eight years in Oregon’s Shakespeare Festival. He has performed with the Chicago Shakespeare Theater, PCPA Theaterfest, Utah Shakespearean Festival, Geva Theatre Center and The Tacoma Actors Guild.

Trinneer is a film, stage and television actor. He has had dozens of roles in Hollywood on hit television shows; his highest profile roles have been  Charles “Trip” Tucker III on Star Trek: Enterprise and Michael on Stargate Atlantis.

We'd love to hear from you!

Are you an alumni of the Department of Theatre & Dance? Tell us what you’re doing! Click here.