With a population of about 300,000, the Bwa live in both Mali and Burkina Faso. The Bwa are governed by a council of elders. Unlike many surrounding cultures, the masks are not owned by secret societies. Masks are owned by entire families, but are in the care of elder men. The masks are accessible to everyone in the family, men and women, although only the young men wear them in the rituals. The rituals preformed are mostly to communicate or tell stories of encounters with the spirits and the Bwa people (“Art and Life in Africa”)1.

The Bwa make two different types of masks. The first type is made out of wild plant leaves, to represent nature and wilderness. The second type is made out of wood to represent multiple spirits who protect them. The masks all are representative of Dwo or (Do), which is the son of the creator spirit. Dwo was sent to be the messenger to humans and the intermediary between humans and the spirits. He is also representative of plant and wildlife. The Bwa in the north dominantly wear the leaf masks, whereas the southern Bwa later adopted the wooden mask tradition from neighboring villages and then incorporated the new techniques into the telling of their tales. There is controversy in the use of the new wooden masks because of them not being traditional, and Roy reports there has been fighting between the northern and Sothern Bwa3.

Many of the masks represent natural spirits and are identifiable by the animal depicted, with each mask carrying a different meaning. For example, the monkey is a trickster. Bush pigs are considered dirty, and are avoided by people in other masks. Others of more abstract animals, are various representations of Dwo/Do, who is charged with the purpose of safeguarding humanity. Birds are believed to be messengers, communicating from the Bwa people to the supernatural world. There is not much know about the bird masks because they are not common animals to be represented, but Dagan has suggested they represent the power of a chief. This mask in the PLU Collection could represent a species of bird that inhabits the bush or it could represent a chicken which is often a common sacrificial animal used in many rituals. 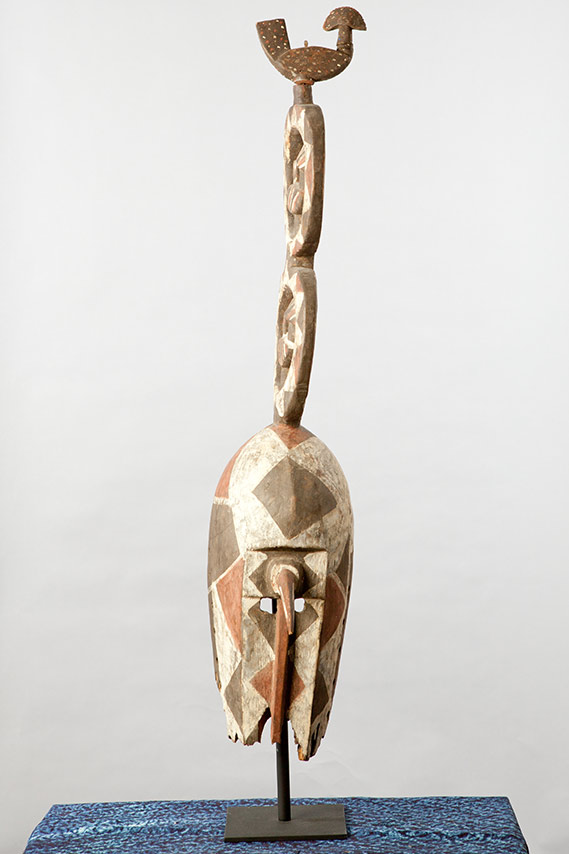 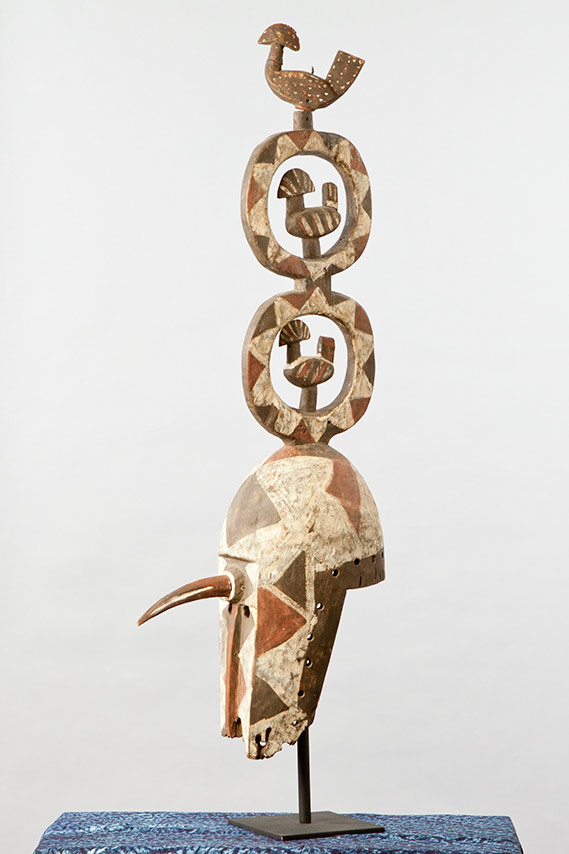 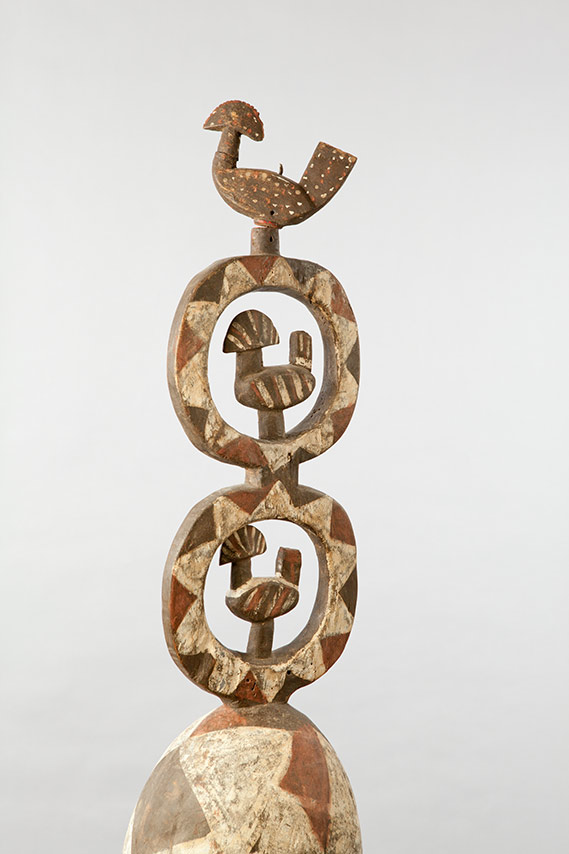 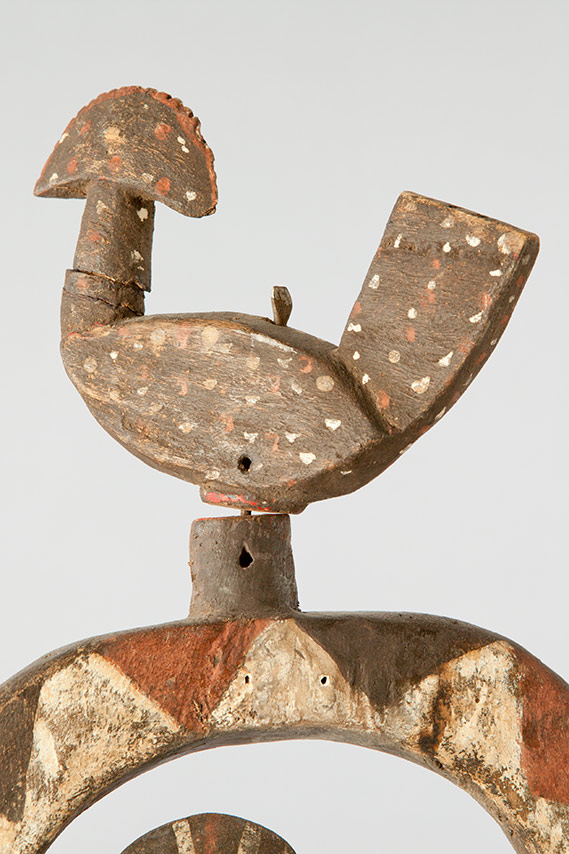 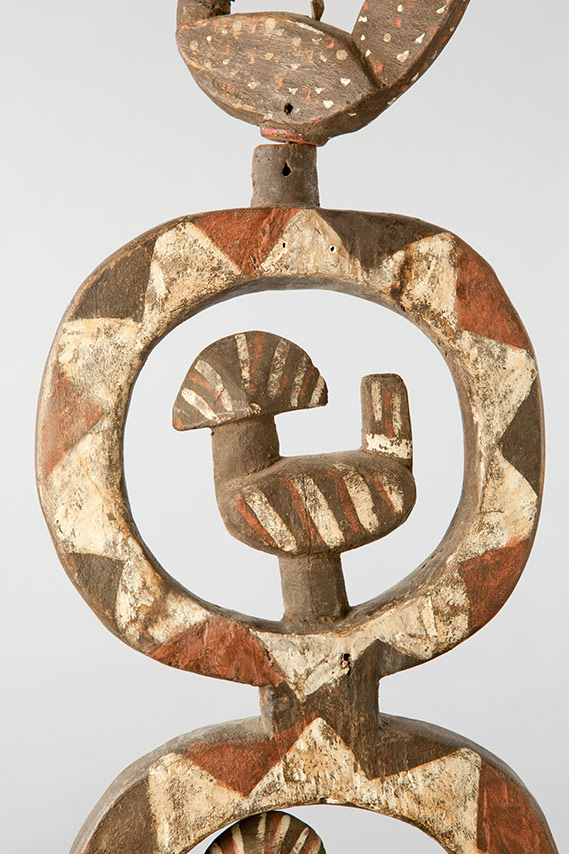 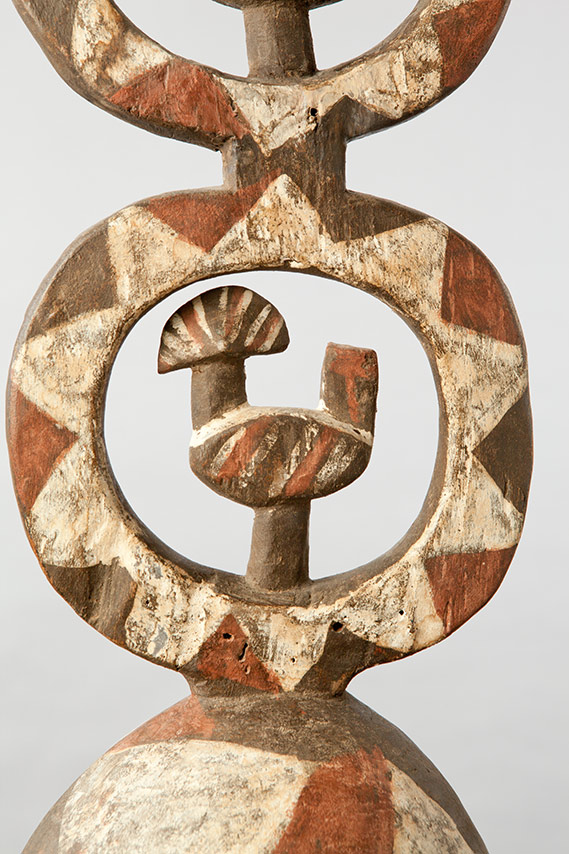 This mask is most likely a Nunuma style mask used by the southern Bwa, the Nyaynegay (“scarred Bwa”). These masks tend to have more elaborate composition, such as the individual birds and their wooden rings in the PLU mask, than masks made in the Bwa tradition, which are made from a single plank and tend to be more rectangular. This mask has a large projecting beak on the front; it is painted red with a white stripe. The eye holes are close together and under the beak. The bottom part of the mask, which is shaped like a large bird, is mostly painted white with some large red and black geometric shapes on it, resembling triangles. The 3 birds are on top of each other linearly; the first two encircled while the top most one has nothing surrounding it. Each bird is 3.7” by 3.5” (9.5cm by 9cm). The top bird has red and white dots on it, while the two middle birds have red and white stripes on them. The wooden circles surrounding the birds have red, white, and black triangles around them. The top bird appears to be able to spin.

The red, white and black paint adorning the mask is common of all Bwa mask types. Indeed, it is indicative of the mask traditions of many of the peoples of the region. The colors of the paint are also believed to have different meanings, although Dagan notes this has not been extensively researched. The red is for life and danger. The white is for death and illness. The black is for purity and knowledge. The red and black paint are applied to a white background to make the images stand out in relief.

Masks from the peoples of Burkina Faso are traditionally used in funeral ceremonies and are intended to make natural spirits visible to the community. The wearer performs a complex dance designed to imitate the movements of the creature represented by the mask. These dances in turn tell the story of the spirit represented in its assumed animal form.