Made of a soft and lightweight wood (ntene from the tree  ricinodendron rautanenii) and decorated with pigment, this makonma face mask (also called lipiko) is given a more authentic look by the addition of human hair in the scalp area; it’s held in place with beeswax. Holes in the ear lobes indicate ear piercings; a long and flat nose and a yellowish red pigment to represent the people who wear the masks. A mouth opening and distinct recessing in the eye areas as well as lips of a darker pigment and eyebrows that have been craved and then darkened, give the mask a lively appearance. The vertical grain of the wood on the upper lip, in which a lip plug (labret) is carved, accurately imitates the look of stretched skin. The lip plug itself has an outside diameter of two inches. In Makonde culture, the lip plug is called an ndona (pl. dindona). This circular wooden plug was inserted in the upper lip, and generally worn by Makonde women, although some Makonde men wore them prior to 1960. The rough carved wood inside the mask, is in a stark contrast to the smooth, finished outside of the mask. However, this does allow us to identify the areas like the nose area, where there was limited room given for the dancer’s own facial features to fit properly. There is a noticeable patina where the nose, chin and sides of the face would have rub against the wood. The two holes, one behind each ear, are where raffia or something similar would have been used to secure the mask to the dancers’ head. There are smaller markings around the rim of the mask that indicate there may have been additional raffia used to help conceal the identity of the person wearing the mask.

Located in Northern Mozambique (and to some degree in Southern Tanzania), the Makonde are “an ethnic minority in Mozambique who in 1997 numbered just under 250,000, or approximately .015% of the national population. The majority live in northern Cabo Delgado province on the 1,715 square kilometer Mueda Plateau, named for the large Portuguese administrative post built near its center during colonial times” (Bortolot, Language). The Cabo Delgado province is characterized by mango trees, dirt, sandy soil and steep escarpments and dense forest scrub, and food crops consist of maize flour, rice and beans with a large concentration of cattle raising. “A largely agrarian people with a kin-based system of land stewardship traced through matrilineal clan affiliation,” in which ancestry is traced through female line and men move to the villages of the women they marry (Bortolot, Language). 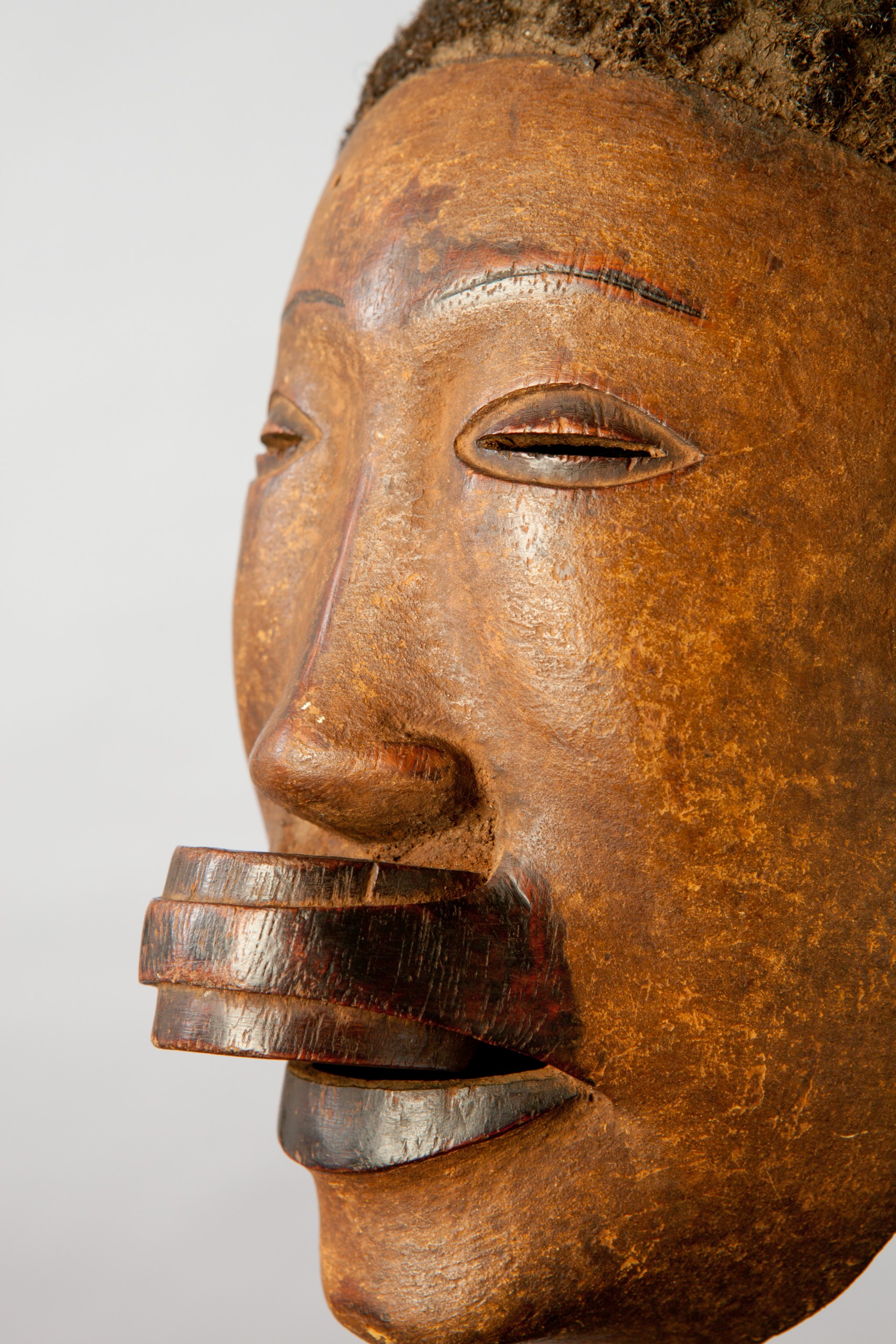 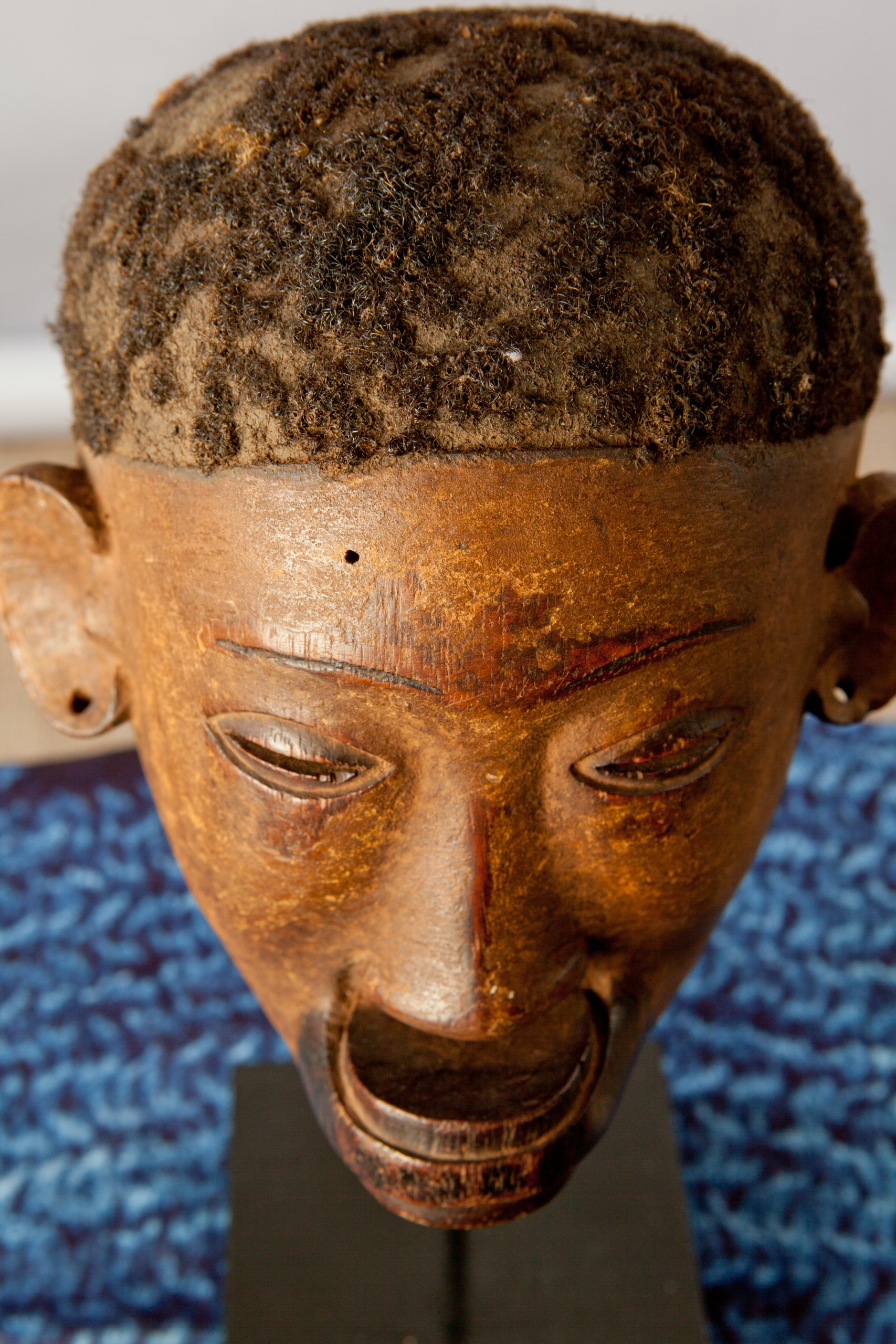 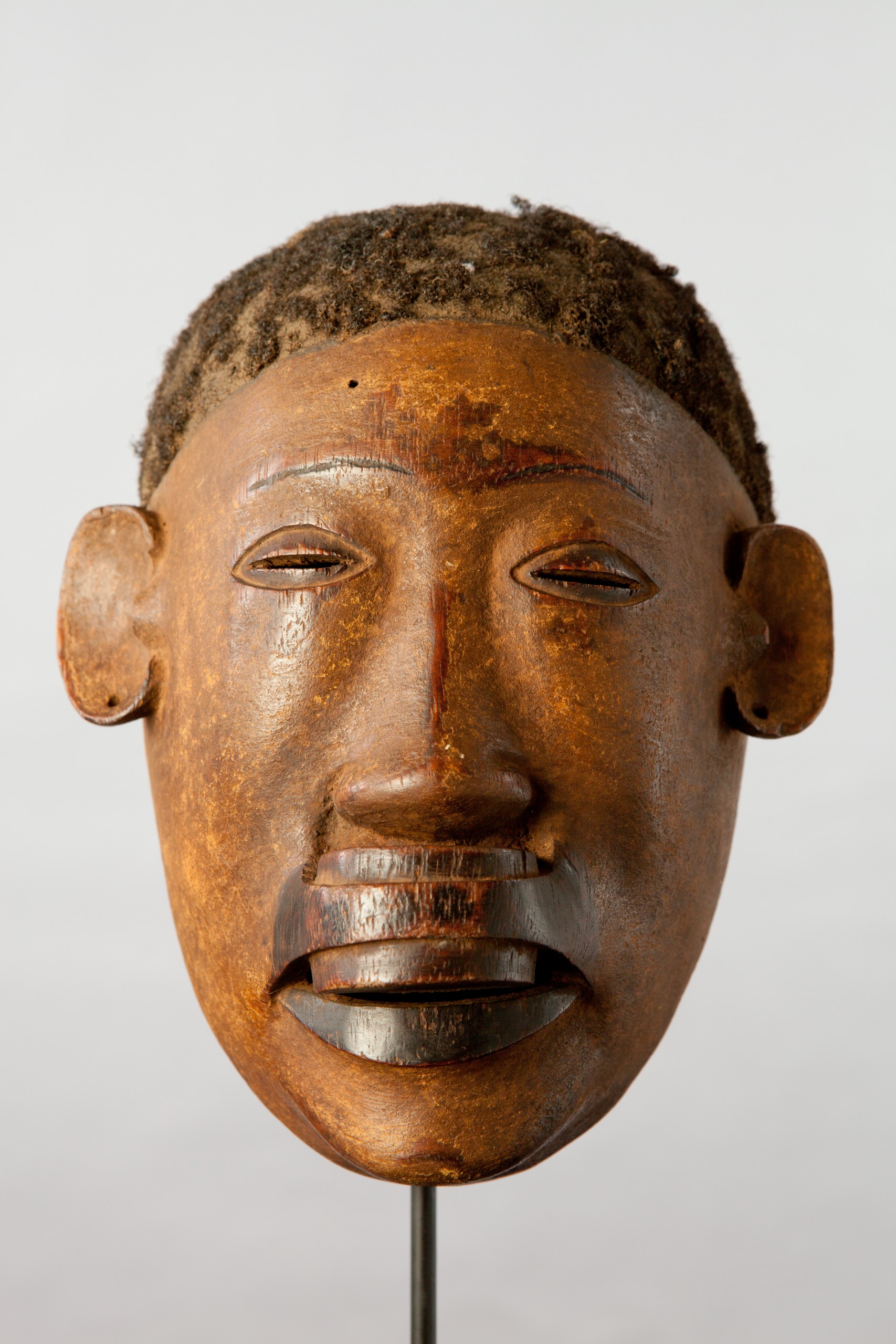 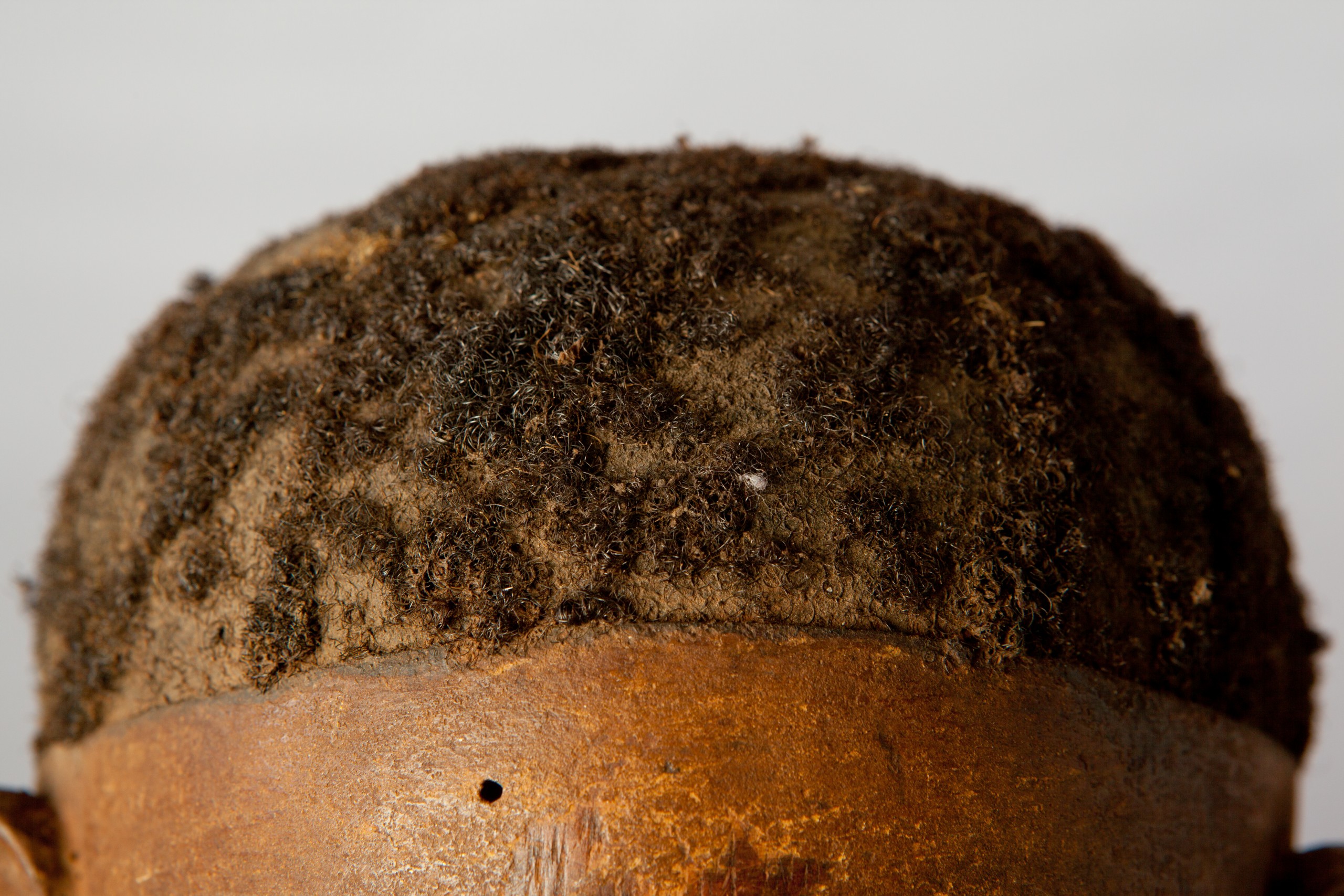 The makomba face masks, which depict females, but are worn by men in masked performances, can also be called lipiko (pl. mapiko), however, they are worn in front of the face rather than over the head as are the helmet masks. The plural, makomba denotes dances with face masks. Both face masks and helmet masks are used in Makonde culture in a series of celebrations called mapiko about which far more is known than the use of he face masks. When, in this male dominated part of Makonde culture, the men wear these masks, they take on not only their own identity – a man in a mask – but also the dramatic depiction of a character and the incarnation of an ancestral spirit. Men make the masks in secret and talk of them in public is prohibited in order to maintain the separation between reality and the spiritual realm of the mapiko. As a masculine artistic medium, mapiko deals with matters of gender and social structure; until recently women were not involved in the process at all. (Bortolot, Revolutions). Mapiko serves as a way for the Makonde to find and assert themselves in a world that has been fast changing. The masks that are made are easily recognizable as Makonde because they have facial ornamentation such as tattoos, dindona (pl. lip plugs), and chipped teeth; all are representative of puberty initiation rituals. As well as masks, dancers wear tight fitting costumes that cover their entire bodies except their hands and feet. Small metal bells and seedpod rattles add to the costume performance, as do drums of various sizes accompanied by horn trumpets, iron pipes, and hoe blades to create a complex rhythmic sequence (Bortolot, Revolutions).

Before colonization by the Portuguese took firm hold in this region in the 1920s, the Makonde lived in small, clan-based villages. The Makonde of Mozambique can be either Catholic of Muslim. The Catholic Church was established on Mueda Plateau with the arrival of the Portuguese in 1924. “Puberty rituals became organized at the mission in a substantially shortened way and purified of all sexual content . . . to ‘keep in its former aspect many of the fundamental elements used in pagan rituals; the content was changed, keeping the wrapping’” (Israel). Although the church “averted it’s eyes” from circumcision, the rest of the male initiation process took place in the mission rather than out in the bush. “Christian prayers and rosary discipline substituted for the moral-sexual teachings,” and the final ordeals of these puberty rituals that used to include scarification and tooth chipping (Israel). “Missionaries organized mapiko groups to dance in the mission’s precinct, with songs inspired by the gospel’s teachings and purified of insulting and provocation,” this was to dispel open hostilities between lineages and generations of Makonde. As such, rivalries were fought out in the dance arena (Israel). It was short lived and today village elders because of the church’s involvement consider modern mapiko untraditional. Today, groups perform in celebration of national holidays, or special events within the community, and involve multiple mapiko groups from different villages who compete to gather the biggest audiences.

The sixteen-year revolution that resulted in the Frelimo independence movement overthrowing the Portuguese colonial regime ended in 1996 with a peace treaty. During this time woodcarvings were sold to raise money in support of the revolution. This poses the possibility that it became common that not all Makonde masks were used for their original purpose, and that the depiction of persons on the masks would have been altered to appease the buyers, most likely from Western countries. It is therefore possible that the two Makonde face masks in the PLU Collection were not made for the purpose for which the Makonde made masks, to express their culture and history, but were produced as part of this way to financially support Mozambique’s fight for freedom.

Finally it should be noted that female feminist leaders started their own lipiko after the war using clay to make their masks. This didn’t fare as well as wood because clay is more fragile and therefore breaks easily, so they began using cloth. Women have only used clay and cloth as masks; there is no record of women using or wearing wooden masks.