On this mask, the flat crest is slightly longer than the mask itself. It is structured around a central post that erupts into an inverted triangle with thin fringes on either side. Two downward sloping horns on either side that are covered in hide, sit below a hollow diamond shape. Two protrusions invade the negative space between the diamond and the post. It is covered in triangular designs of faded red, white and blue pigment. The wood is split in two places near the top, one repaired with a staple and the other held together with hide.

The elongated mask features two closely spaced rectangular holes for eyes. Three ridges run down the length of the mask, from the domed top to tapered chin. The central ridge starts from the crest as studded protrusions and transforms into a smooth ridge below the eyes. A central ridge exists behind the crest, gradually tapering into the crown. The ridges on either side are all studded and do not run the length of the mask, instead going down from the eyes, with two protrusions located at the temples. These ridges are painted red, with triangular patterns decorating the mask. The domed top has semicircular ears. Bands of color encircle the crown of the head. The back right portion is damaged and held together by a metal staple. The holes on the side are for the securing of a fitted cap or cowl of fibers that hides the wearer’s identity. The bigger hole in the cheek is likely used for the inserting of a stick for the performer to bite down on to, keeping the mask upright, further securing the mask when performed. Although what specific masking tradition this mask belong to, this feature is similar to the other Mossi mask in the PLU Collection.

The Mossi (moss-ee) people have many different types of masks, reflecting their cultural diversity. Mossi cavalry from northern Ghana swept onto the Mossi plateau of central Burkina Faso in the 15th century. Farming peoples, which then included the Dogon, Lela, Winiama, and Nuna, populated this area. Those who did not flee intermarried with the Mossi, resulting in the diversity of sculpture and mask designs found on the plateau today. The contemporary Mossi are primarily famers, tending to crops of millet, sorghum, maize and groundnuts. In the north, some Mossi raise livestock. The Mossi language is known as Mooré, one of the two primary languages of Burkina Faso. Numbering 2.2 million, they are the largest ethnic group in the country. Those descended from the invaders are the nakomensé. Those that descended from farming peoples are known as nyonyosé. Other groups include smiths (saaba) and traders (yarse). A patrilineal (inheritance passes through the male line) and polygamous (men can marry more than one wife) people; they have deep respect for the spirits of their ancestors, who have power over the forces of nature. 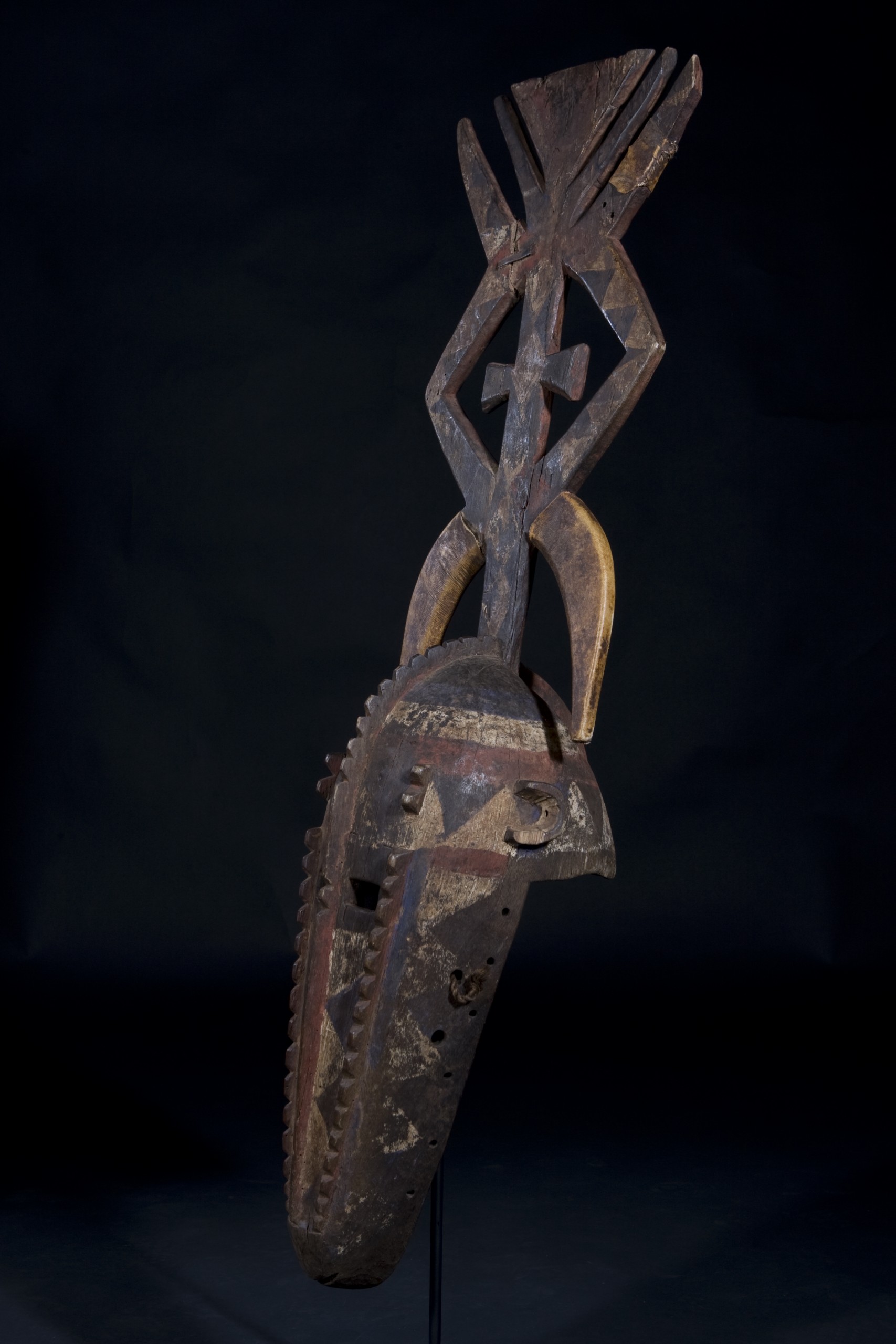 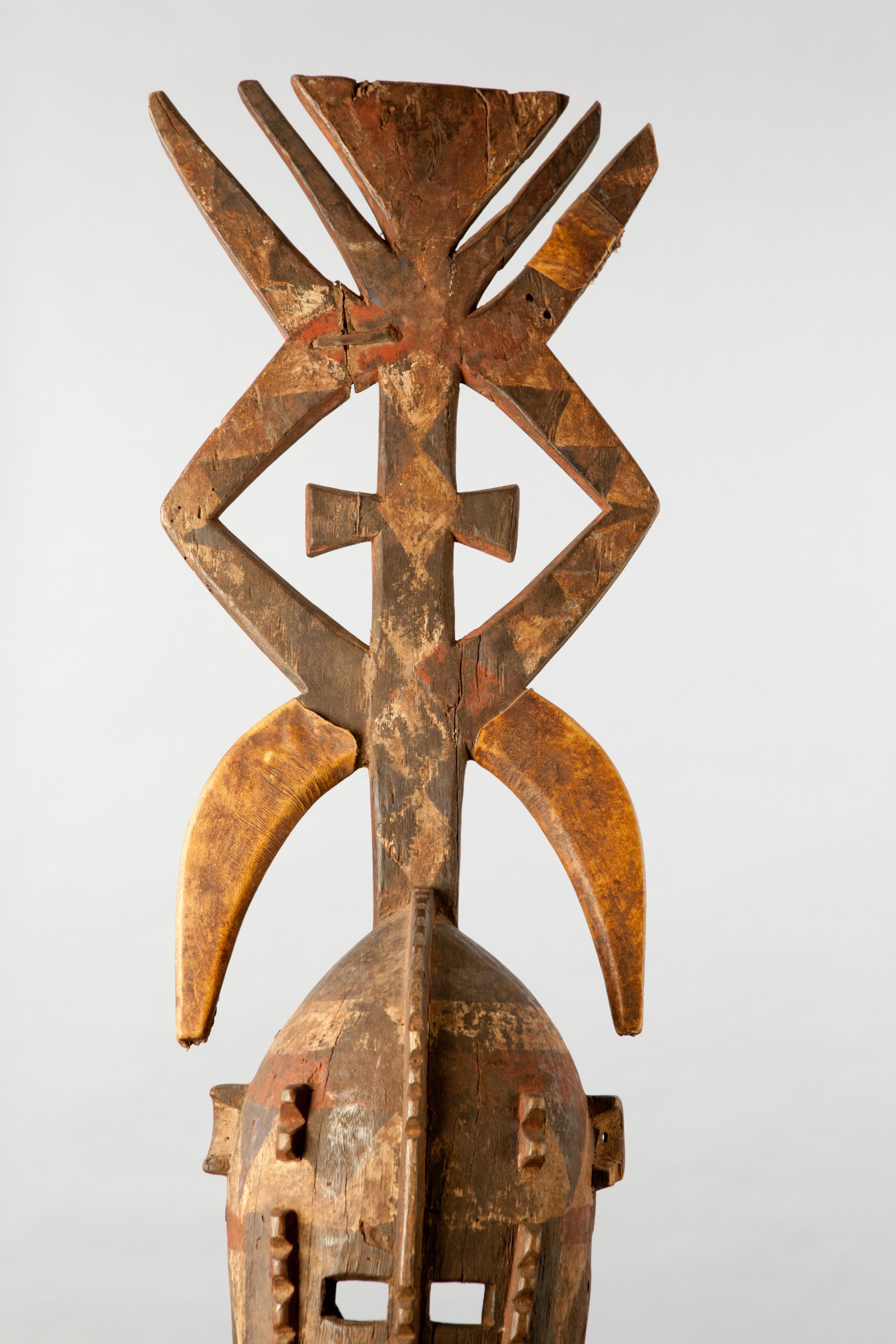 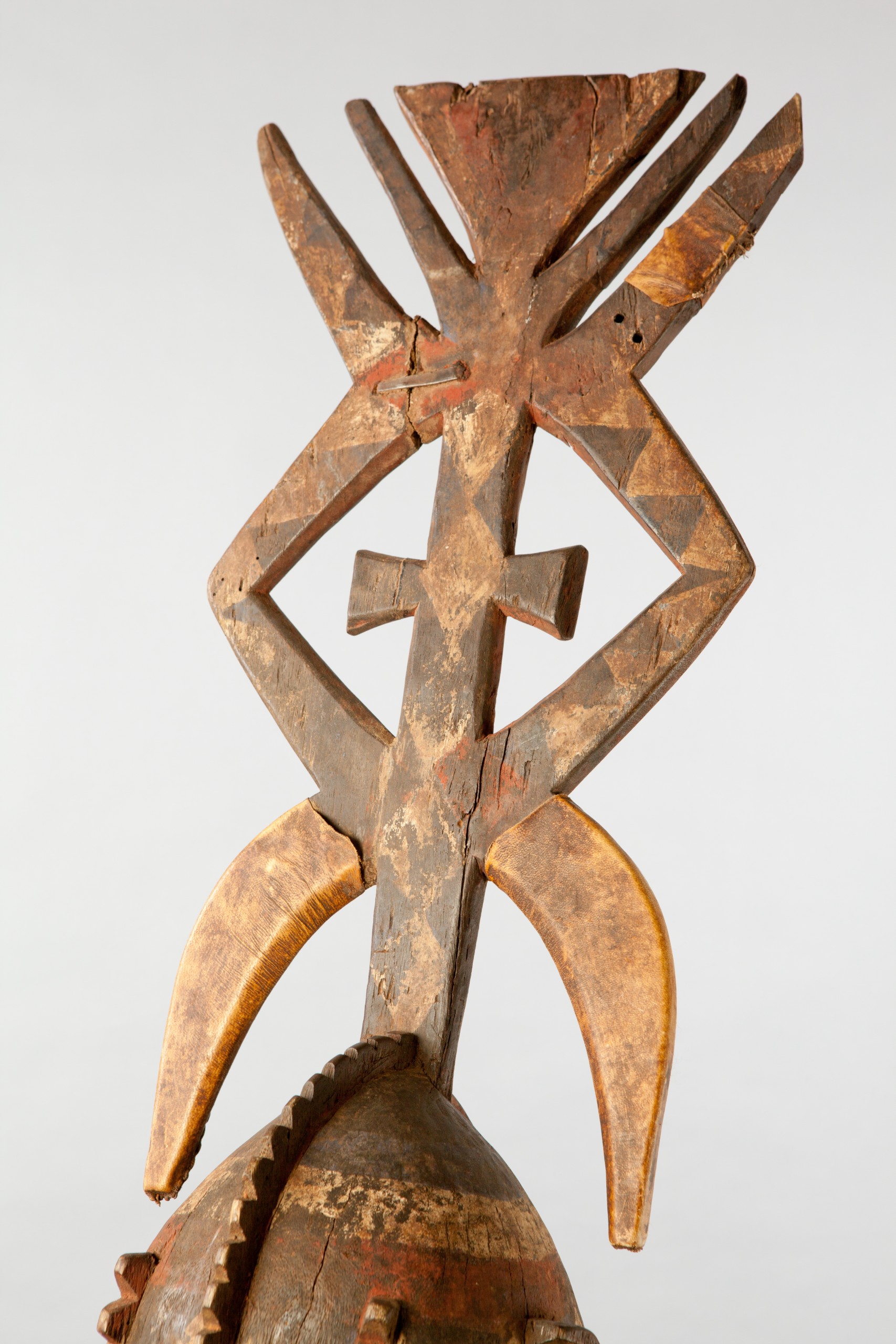 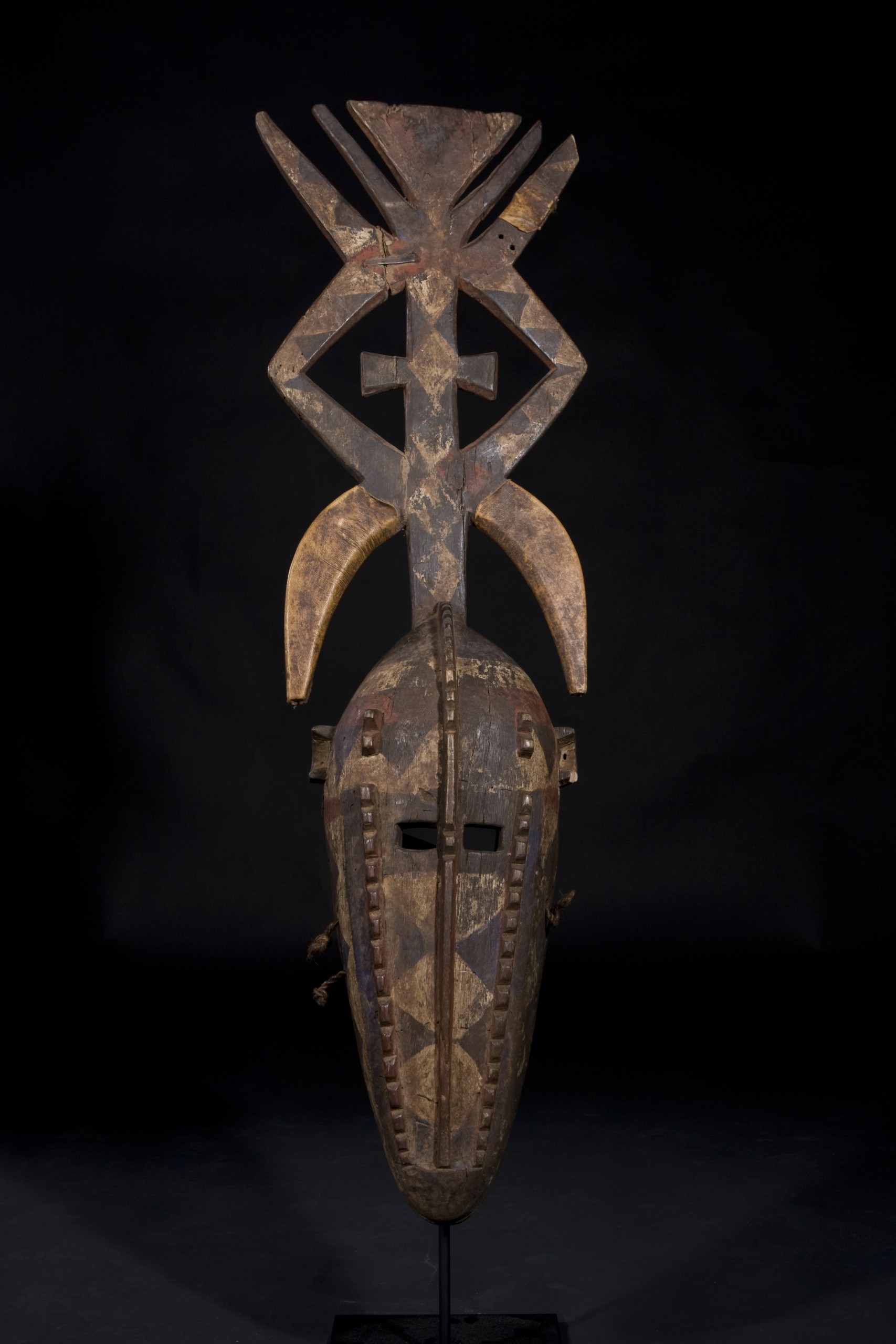 The basic familial unit is the yiri. A single adult male, the yirisoba, heads the family and lives in a rectangular building surrounded by various circular houses with conical straw roofs that are occupied by his wives and their children, as well as any older, unmarried children. Each male head of an extended family, the zaka, lives in a compound containing a similar layout. The height and state of repair of a compound’s surrounding mud-brick wall is indicative of the relative social position of the family. Inside the compound are spaces for granaries, the grinding of grain, preparing meals, and enclosures for domestic animal. Several of these compounds comprise a budu, with the oldest male of that collection known as the budukasma. Although these compounds are grouped in a neighborhood, they are not clustered together, but are instead separated by fields of crops. The families of the village political chief are more closely spaced around his location. Mossi marry outside their budu, with the exception being the blacksmiths (saaba) who are an occupational class.

Masks are known as wango (wan-go), which share that name with the mask performers, and are primarily the nyonyosé, descendants of the farming peoples. Mossi masks, such as the ones in the PLU Collection, are made from a single piece of lightweight and soft wood from trees in the genus Ceiba. It is carved with adzes and knives before the wood dries, which makes it is easier to shape. Sand and rough leaves are often used as a form of sandpaper to finish the masks. Pigment is applied in various geometric shapes, with triangles, rectangles and crescents the most common. Colors are produced from various materials, including charcoal, soot, lizard excrement, indigo, eggshell, hematite, kaolin, vegetable resin, and chalk mixed with water or egg whites.

Masks are owned by a clan (a group of people claiming descent from the same ancestor) and are used in various ceremonies, including initiations, funerals, and annual year-end sacrifices. The masks represent the spirits of familiar animals and a clan’s ancestor spirits or serve as guardians of fruits. Every member of a clan is connected to the animal that their clan’s masks depict. The animal is involved in the founding myths of the clans and members of a clan cannot kill their clan’s animal. Masks are named after the animal a mask represents, prefixed with the word “wan-”. For example, a gazelle mask would be known as wan-nyaka. The masks are commonly accompanied by a costume made of blackened fibers from the hibiscus plant called a bindu. Young men who are educated in the meanings of the mask are those chosen to wear them, and they are also known by the name wango.

The oldest mask a clan owns is known as the wan-tasenga (big mask), and is the principal mask used at funerals and year-end sacrifices. It is brought out less often, and does not leave the primarily village where the clan resides. Lesser masks, called wan-liuli (bird mask), serve as crowd control during rituals, ensuring that the clan members to whom the masks belong are closest to the big mask. Any member of the clan may attend these mask performances.

In funeral services, masks act as witnesses for the ancestors ensuring that proper burial rites are being observed. In this capacity, they do not perform or dance. They accompany the body from the funeral to the burial location occupying a secondary role in the ritual. However, they do perform during an annual memorial for those that died during the past year. They dance to music made by whistles (wiré) and long wooden drums (gangaado).

When they are not being used in public ceremony, masks are stored in an ancestor shrine (kimse roogo) or the house of the clan head. Sacrifices to the ancestors are made with animal blood and performed for the general success and protection of the clan, ranging from good harvests and rainfall, health, solutions to problems and various other wishes. If a mask gains a reputation for success in a certain aspect of life, non-clan members may wish to sacrifice to the mask through the head of the clan. Every May, there is an annual sacrifice for blessing and good fortune in the coming year called suku or sigim-dam; it is celebrated with the brewing and drinking of millet beer (ram).

Christopher D. Roy. “The Art of Burkina Faso.” The University of Iowa. Art and Life in Africa. http://africa.uima.uiowa.edu/topic-essays/show/37?start=01