After a long history of forced migration and union with other groups, the Yaka have been an independent society since the 19th century.  Living in the northern Congo, the Yaka are primarily hunters, although they also practice small scale farming.  The tight-knit social system of the Yaka consists of a chief and his second in command who delegates to lineage chiefs.  The Yaka are known for their masks, sculpture, and decorative everyday objects.  Also, the neighboring people have several traditions in common with the Yaka, and may be easily mistaken.

This mask in the PLU Collection is one of three styles used by the Yaka people of the northern Congo in the Mukanda coming of age ceremony, in which boys are circumcised. There are two classes of adult leader figures, who wear different masks, as well as the initiates’ masks, which are danced at the ceremonies. The leaders’ masks are slightly pared down versions of the initiates’ masks. There are several varieties of mask with varying sorts of figures on the top, but the general idea is to display a masculine confidence that wards off ill-happenings while the youth are being initiated.  Personal touches or sentiments are added with chosen animal or sexual sculpture affixed to the top.  Also the leaders often call out comedic or grotesque comments of a sexual nature to further encourage the initiates. Even when employed for more lighthearted entertainment purposes, they still come with moralizing undertones.

Although the ceremony in which these masks are danced is off limits to anyone who is not a man from the community, it is known that some of these masks tell moralizing stories about subjects such as the dangers of women. There are three particularly distinguishing features of Yaka masks that should be noted. The first, the upturned nose of the face, is a common feature in much of the Yaka art work, as well as the initiate masks. The mouth of the mask juts out from the face but does not extend further than the nose. Bacquart notes that the nose is both an allusion to the elephant and a symbol of masculine power; appropriate for the occasion of circumcision. The large nose found in Yaka masks and other carved figures is said to point to male fertility, while the shape of the eyes reference the moon and therefore female fertility. 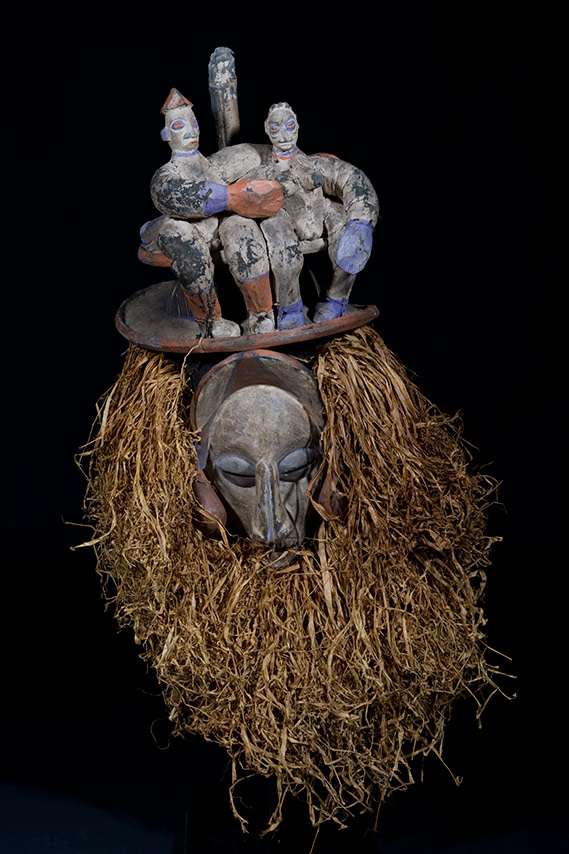 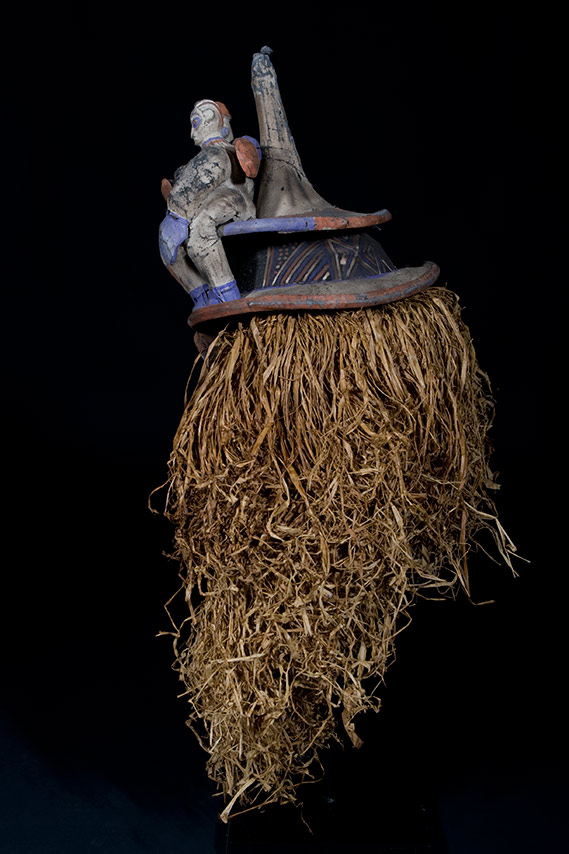 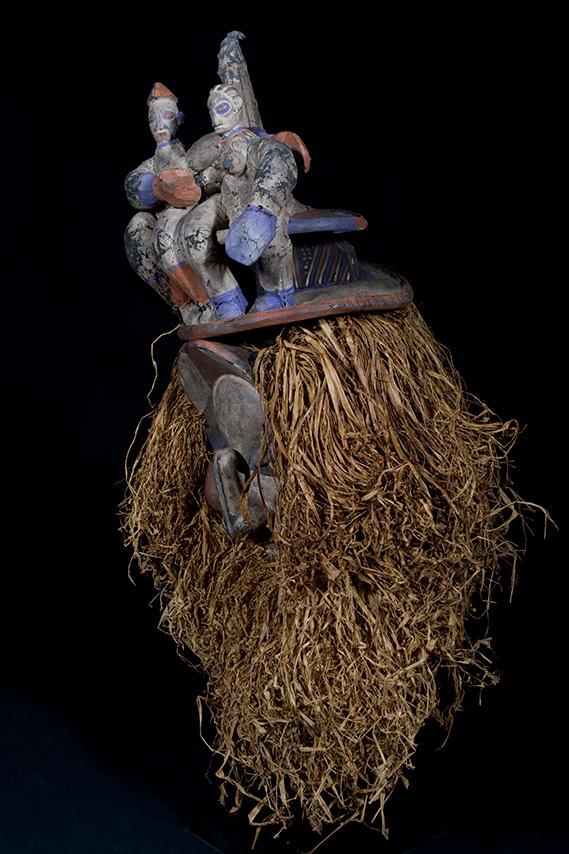 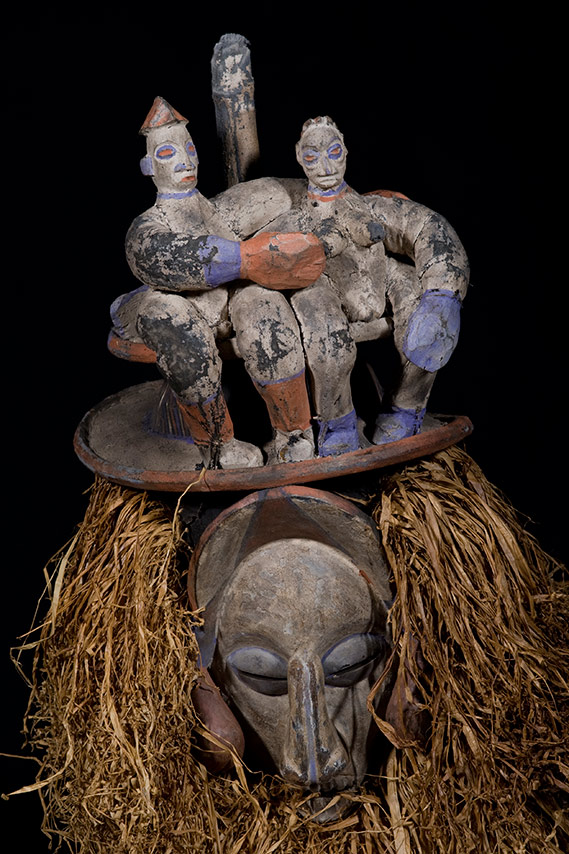 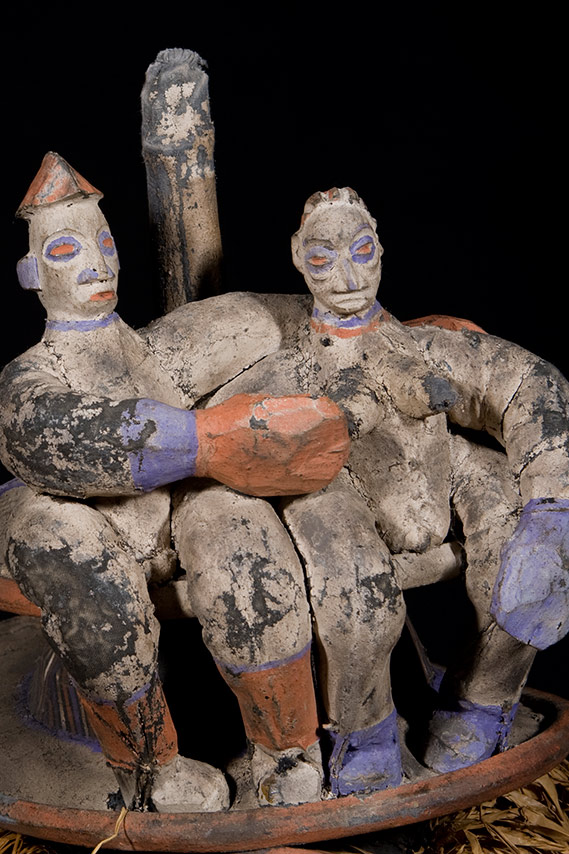 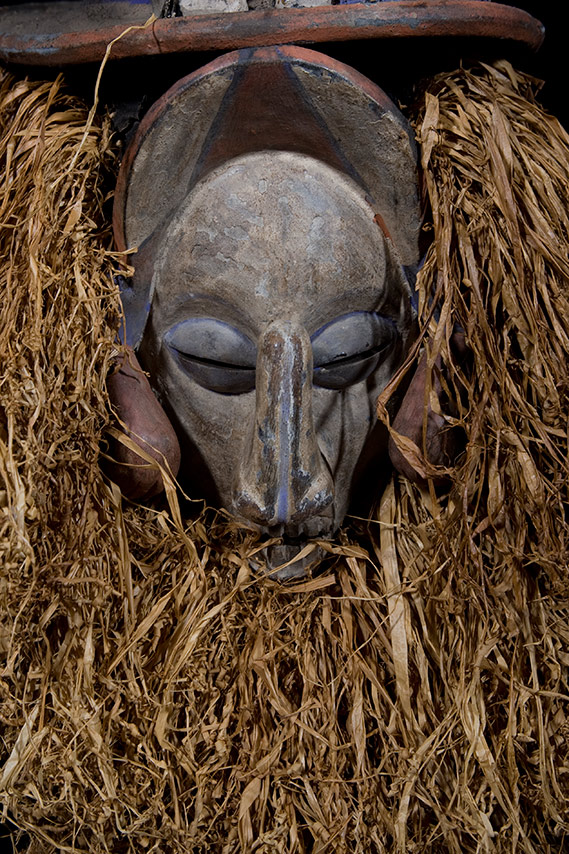 The second is the one or two-tiered, brimmed-like pointed that is found on top of the generally egg-shaped face.  On the PLU mask, this crowning piece contains a male and female figure sitting with arms around each other and the male reaching across the front to touch the female’s breast.  Various line and dot patterns are painted onto the hat, the basic colors being red blue and white.  The male figure also wears a hat, while the female figure is depicted with a knobbed hair style. On the Yaka mask in the PLU Collection these figures are not distinct enough to be sure of what they represent or are doing.

The third feature is the full raffia headdress.  The majority of the mass of these masks is made up of raffia, which extends from the back of the head sides of the face all around down to the chin. Worn to bolster the young initiates through the hard trial of circumcision, the overall imagery is intended to instill confidence and a sense of aggressive manhood. With all this emphasis on manhood, the nature of gender relations in Yaka society is worthy of further study is

Bacquart reports the masks are made while the young men are participating in a ritual camp, and Adelman notes the villagers later judge whose piece was the best.  In the past these masks were burned after the ceremony, now they are being kept, sold, collected, and displayed after the ceremony is over.