Striking as it is, on its own the tere as it sits in the PLU collection is essentially a dead object. Only through being worn and danced in the proper context is it given life and power.

Fashioned by Bobo farmers out of a hemp-like material called kenaf (Hibiscus cannabinus), the tere is primarily used in male initiation ceremonies (yela danga) where it serves alongside other fiber masks as a representation of Dwo, the son of the creator God, Wuro, who was left on earth to mediate between man and God.

The Bobo people have lived in western Burkina Faso for centuries and are believed to be one of the oldest groups in the area. They are a rural, decentralized people, and agriculture is a primary part of their day to day existence. The dry season (tagaho) and harvest time (birewa danga) are two major times of the year when ceremonies involving masks occur. A central tenant of the Bobo belief system involves maintaining and restoring the balance of the world initially set up by Wuro. These balances such as male/female, village/nature, and cold/hot are fragile and humans easily disrupt them in their everyday existence. For example, harvesting involves bringing crops from the bush into the village and thus requires special ceremonial attention to restore the village/nature balance. Unlike most neighboring groups, the Bobo are very conservative and guard their religious traditions from outside influence. This may be because too much change could easily upset the careful balance and pollute the world, as it did during French colonial days when enforcing private property and land ownership severely altered the Bobo way of life.

Different types of Bobo masks are made of leaves, fiber, and wood and serve different purposes. Generally all of these masks are performed with a full body covering of loose kenaf fibers and are considered representations of Dwo that serve to cleanse the village, maintain the proper balance with nature, and integrate and reintegrate people into the village in initiation ceremonies. While wooden masks may represent animals or characters from stories, fiber masks such as the tere are intentionally abstract because what they represent is abstract. Dwo is a spirit whose presence can be felt, but not seen, comprehended, or described in words. Certain design elements such as the crest may be related to the crests worn by young men returning from initiation ceremonies, but many of the other design elements are up to the discretion of the artists within the parameters of that mask type. Because of this, each mask is unique and has its own personal name and personality. Likewise the dances for fiber masks, performed one at a time in turn, are often abstract and up to the imagination of the performer. Wuro is a God of action, and his creation is celebrated with rapid swirling, flipping, gymnastics, cartwheels, and handsprings, all enhanced by the dramatic movement of the long fibers of the masks and body coverings

The kenafused for fiber masks and their accompanying attire is cultivated in fields of millet and harvested just before performance season. The fibers are often dyed, with red, white and black being the most traditional colors which can be obtained naturally. For several decades Bobo artists have also been using commercial European dyes purchased at the city of Bobo-Dioulasso to create colors such as yellow, green, and blue. According to the French ethnographer Guy Le Moal, tere belong to a family of Bobo masks known as gwarama, which were originally made from wild plants of a reddish color reminiscent of the sores caused by leprosy. It is from the Bobo word for leper, gwara, that the mask family derives its name gwarama. The pigmentation of the tere in the PLU collection is faded from sun exposure and use, but appears to have been black, which has faded to a dark green, gray, or bluish color in places, and what may have been a bright magenta or red-orange color but has now faded to a pale red. 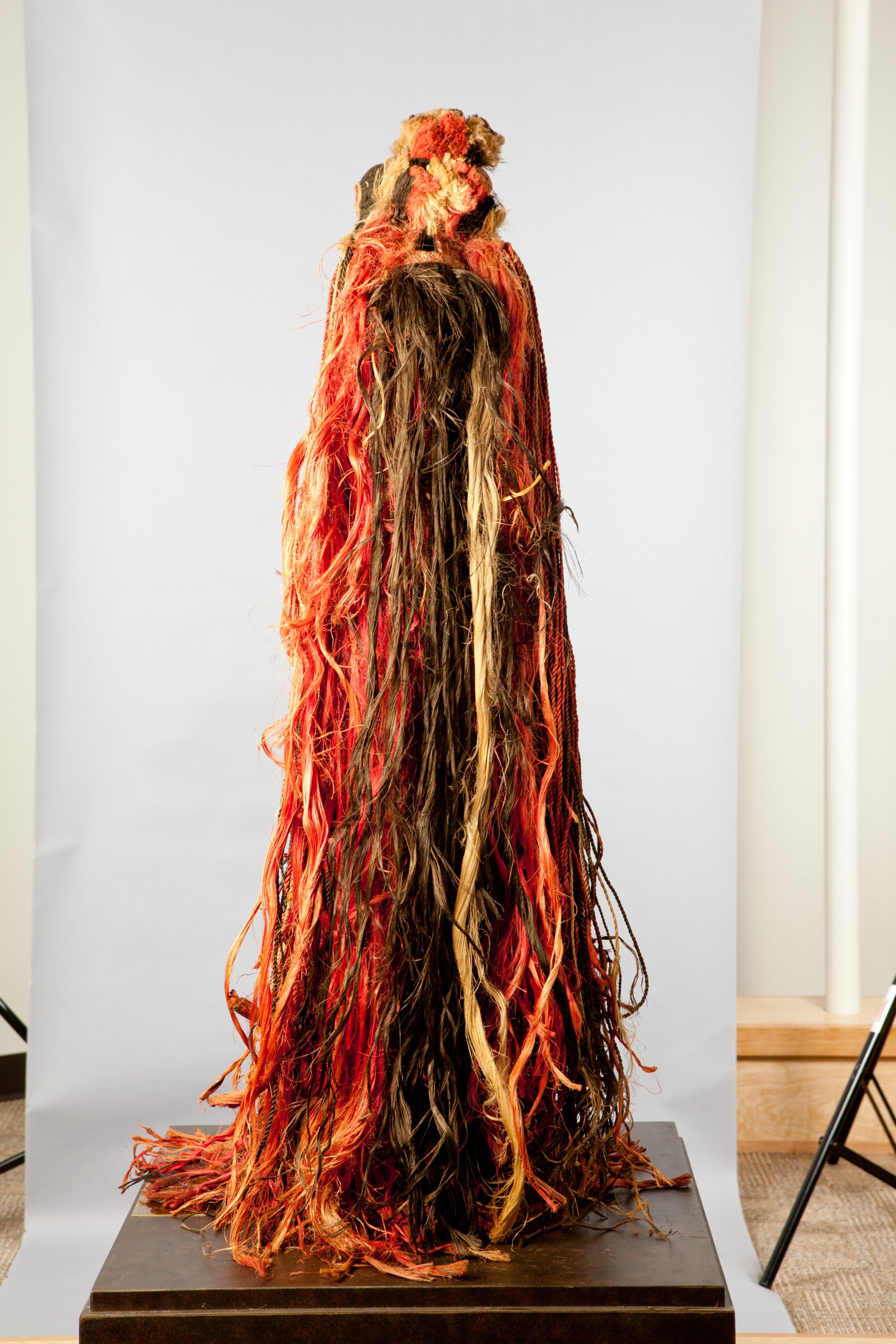 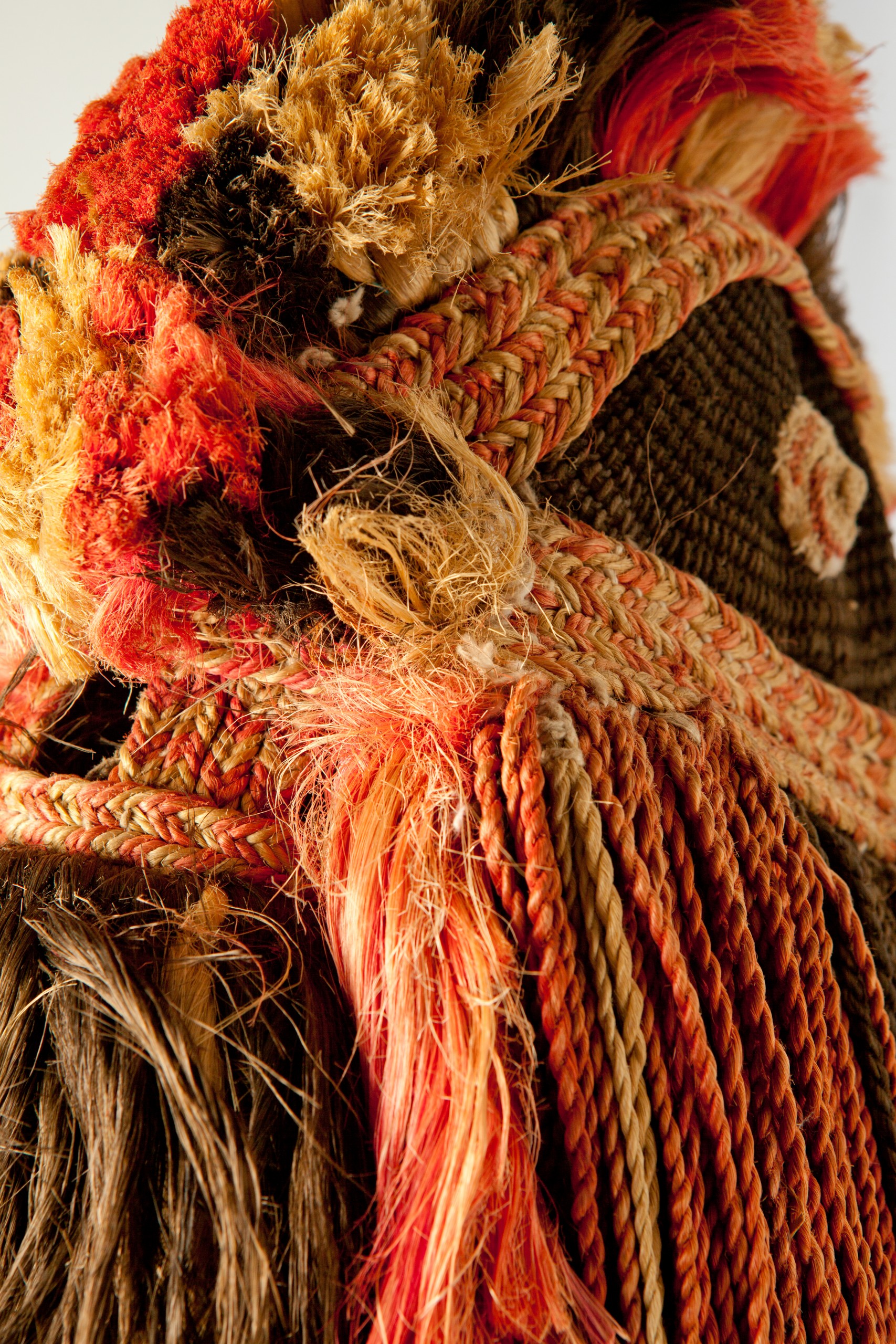 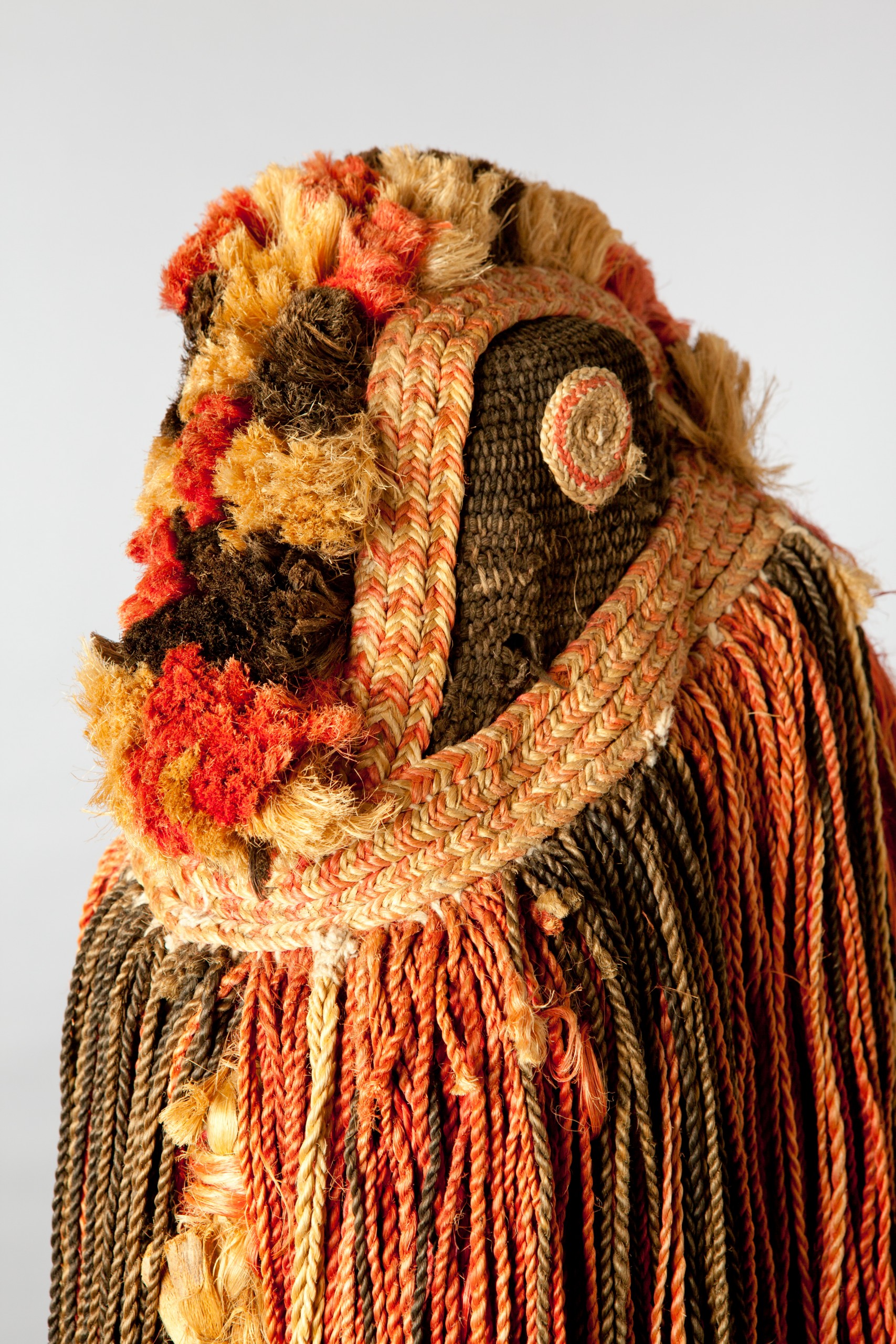 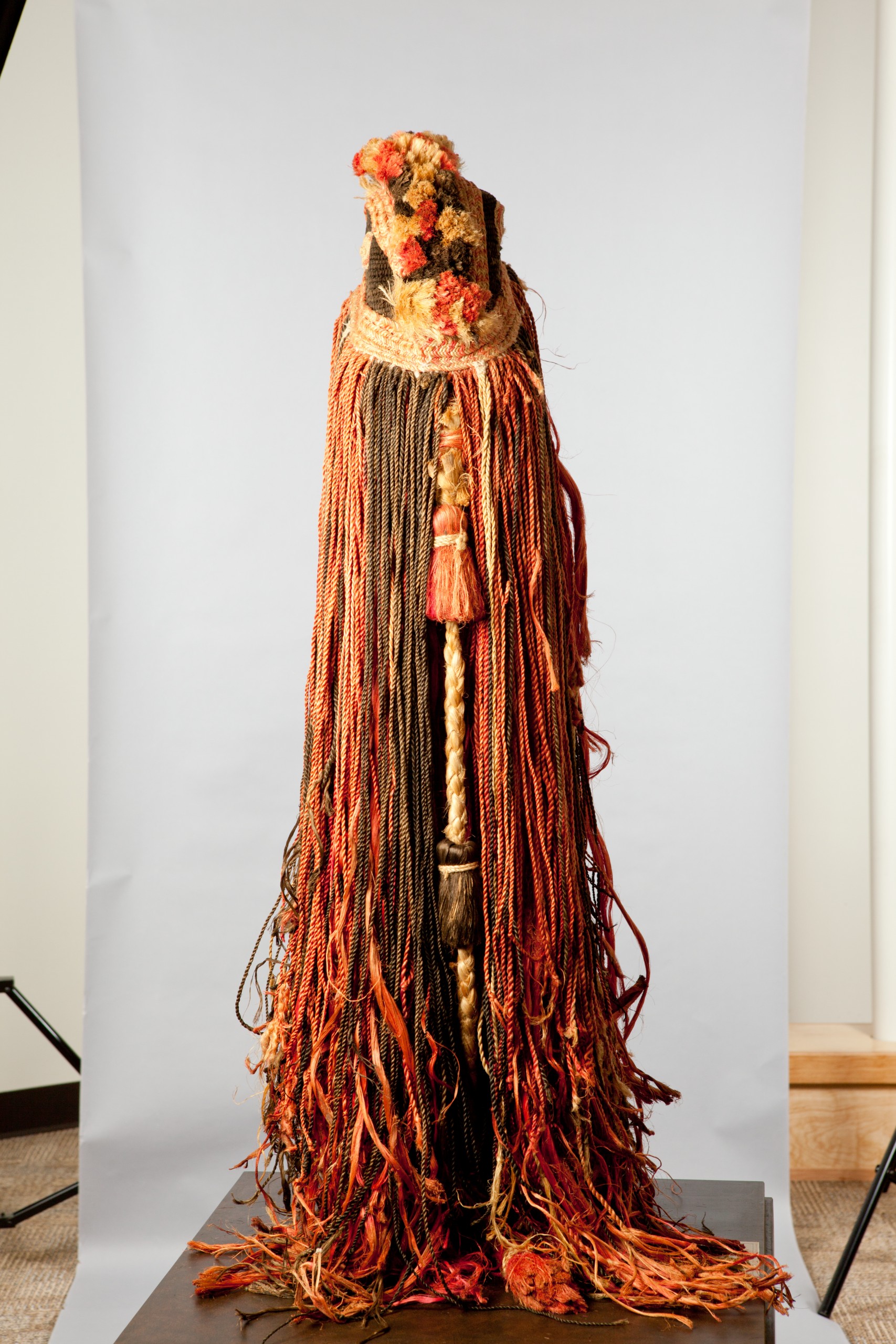 Check out the video above to learn how Tere masks are used by the Bobo.

Once dyed, fibers are manipulated with basketry techniques to form the head of the mask which covers the face, and might be twisted and plaited or left loose to hang down from the head in long strands. For the body coverings, loose or plaited fibers might be knotted to a net foundation. While wooden masks are almost always made by smiths, fiber masks are created by farmers, who form the majority of Bobo society. All masks in Bobo society are created and performed solely by men, but they are owned by families and Dwo and the spirits of the bush are accessible to all Bobo, male or female, old or young.

Though the mask in the PLU collection appears to most closely match what Guy Le Moal describes as a tere, it is also unique from the examples in Le Moal’s book Les Bobo: Nature et Fonction des Masques. The PLU mask contains many elements of a typical tere, such as the crest, the basic shape of the head, and the eyes on either side of the head. However, the crest of the PLU tere is of loose tufts of fiber rather than being tightly woven, and most of the strands of fiber hanging from the head of the mask are plaited compared to the loose fibers in the examples in Le Moal’s book. Perhaps most interestingly, the examples provided by Le Moal clearly show the face of the mask and eye holes for the wearer, whereas much of the front of the PLU mask is hidden by loose black fibers. However, as mentioned earlier the abstract nature of the tere allow Bobo artists to experiment so that no two masks are exactly alike, and other scholars such as René Bravmann agree that the PLU mask is most likely a tere.

The tere in particular is used in male initiation ceremonies (yele danga) where it serves as a subordinate to a mask called a kele, the oldest and most powerful type of fiber mask. Male initiation among the Bobo is not a one-time occurrence, but a process which involves several steps and can take over a decade. During the first step of initiation at about age 10-15, boys start to learn the secrets of the masks and the secret language associated with them. Around 20 years of age a young man participates in the second step of initiation, which involves going out into the bush to create kele masks followed by a ceremony in the village where the initiates are given the authority to perform the masks. Though of lesser importance, the tere would accompany the kele at this time. A young man is not considered a full adult until he has completed the third step of initiation by demonstrating mastery of the secret language, generally between the ages of 25 and 30. Male initiation is particularly important for the transmission of important religious knowledge from one generation to the next and for maintaining the purity of Bobo traditions.

Bravmann, René A. The Poetry of form: the Hans and Thelma Lehmann Collection of African Art. Seattle: Henry Art Gallery, University of Washington, 1982.

Roy, Christopher D. “Do in Leaves and Wood Among the Bobo and the Bwa.” Paper presented at the annual meeting of the African Studies Association, Denver, Colorado, November 21, 1987. Accessed March 2015 at http://africa.uima.uiowa.edu/topic-essays/show/39

Roy, Christopher D. “The Art of Burkina Faso.” University of Iowa Museum of Art: Art and Life in Africa. Accessed March 2015 at http://africa.uima.uiowa.edu/topic-essays/show/37