This wooden pipe depicts a, most likely, Bamum male. It is most likely male because of the puffed out cheeks, which is a common theme among pipes owned by males. They represent strength and a dominant nature.

There is a lot of scarification on the cheeks and chin. The eyes are very detailed and include pupils and eye lids. The ears are proportionately small. The man has a design rising above his head, which is in a five by five grid formation. The squares alternate in a checkered board type style, with every other square either containing vertical or horizontal lines and a pyramid type shape jutting out. The pipe and stem are made of different pieces that were then later conjoined with beeswax. The base piece, including the head and face and the design on the head, which constitutes the bowl of the pipe, is of wood. The second piece is part of the pipe’s stem of the pipe seems to be made of a lighter color wood that has a geometric design on it. The section is made from a read-like material. 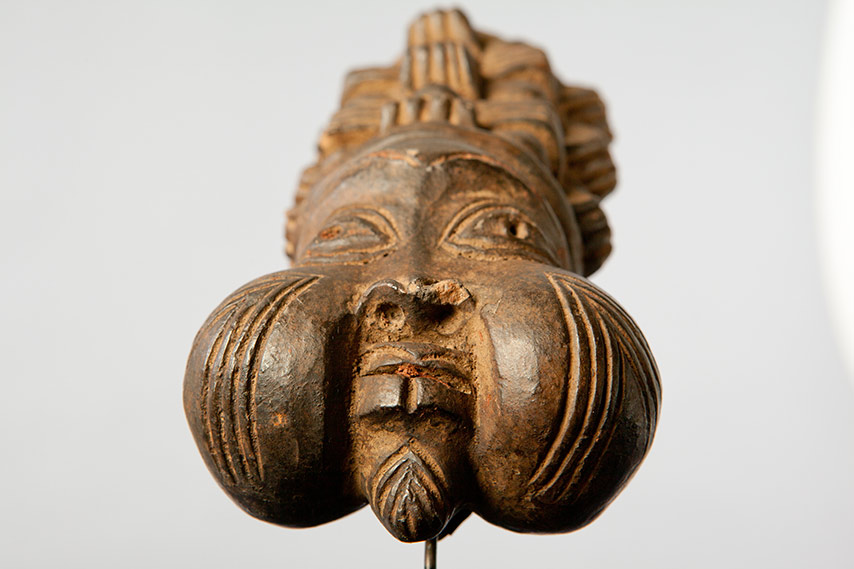 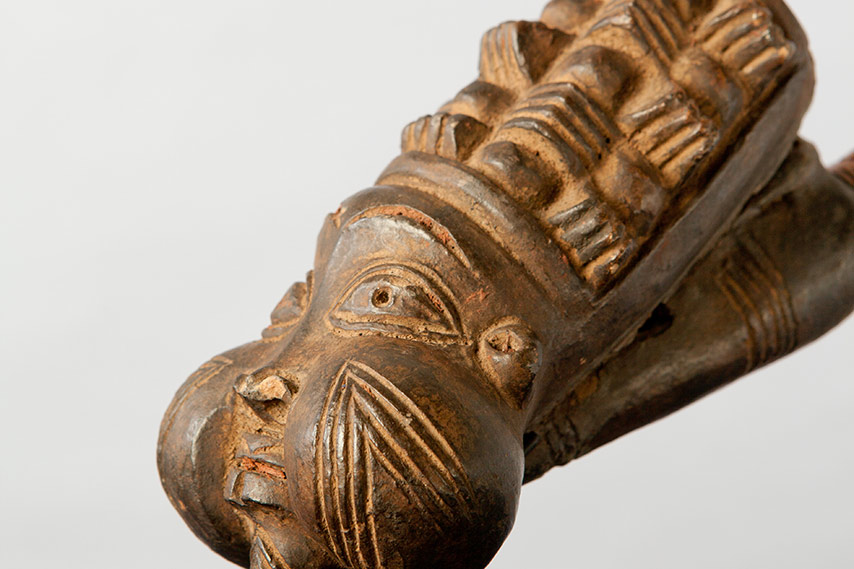 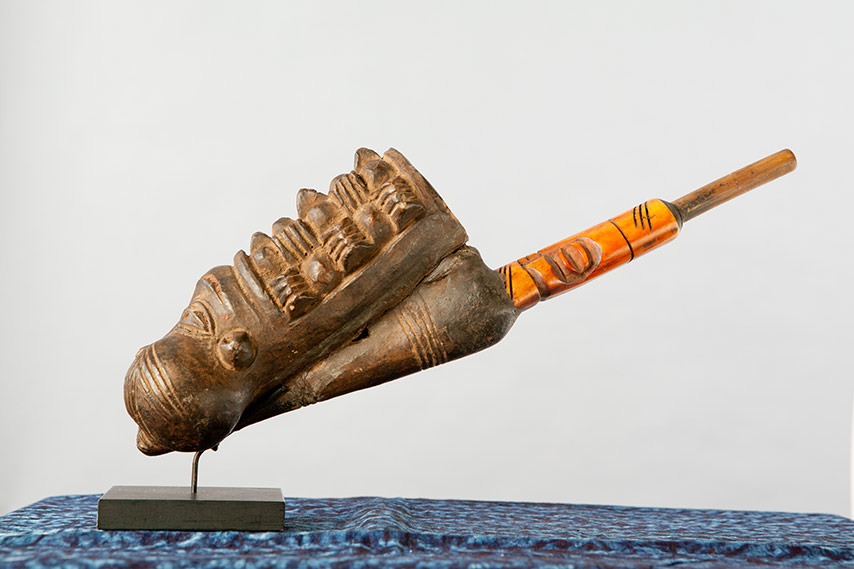 The pipes of the Bamum people are used to smoke tobacco. Everyone can own and use a pipe as it is not restricted to the higher ranking members of the society. However, how the pipes look varies depending on the status of the owner. Women carry small, simple clay pipes. Men’s pipes vary depending on their social status. The higher ranking pipes are generally made of ivory and other finer materials while the simple pipes are often clay. Geometric shapes on the pipes are generally for more common men. Zoomorphic designs and pipes based on animals from around the region, such as different kinds of birds and game, were prestige objects for important me. Anthropomorphic designs were said to be reserved for royal families and the highest elite in the societies. Also, the royal treasury contains the pipes of the deceased chiefs.

The Bamum live in the high western grasslands of Cameroon and are famous for their artistry. The men specialize in wood carving, metalwork, embroidery, weaving, and more. The women are well regarded for their pottery. Both the men and women take part in cultivating the land. They are a farming people who also do some fishing but almost no hunting of game. Their main crops are corn, millet, cassava, and sweet potatoes. They are ruled by a king, whose position is passed from father to son. The 16th king is the most celebrated Bamum king, one reason being that in 1895, he invented a system of writing with 510 pictographic characters. With the help of his scribes, he made a book, which contained the history and customs of the Bamum people. He also made a map of his country, a religious book, and a book on local medicine. Around 1912, he established the first of 47 schools to teach the Bamum how to read and write his language. In 1918, he converted to Islam and it is now estimated that more than half of the Bamum people are Muslim. The Bamum who are not Muslim practice ancestor worship and believe in a supreme god who creates children.