Notched ladders are used by the Dogon people to access the upper levels of granaries, climb onto the flat roofs of houses, and bridge clefts in cliffs. Though in fact used by many peoples in the southern part of West Africa, these ladders are most commonly associated with the Dogon. Wooden granary ladders such as the one in the PLU collection are first and foremost utilitarian objects, and have a simple and practical design. The step like notches would have been carved out of a naturally forked tree with an adze, and one can easily see the short, horizontal marks left on the wood from carving. The Y-shape at the top of the ladder is flattened slightly in the back to enhance stability, and the rub of hands and feet on the wood from use gives the steps their smooth and glossy appearance, called patina. Though intended for everyday use, Dogon granary ladders such as this can be found in many African art collections and are particularly popular for use in interior design because of their simplistic and abstract use of form. 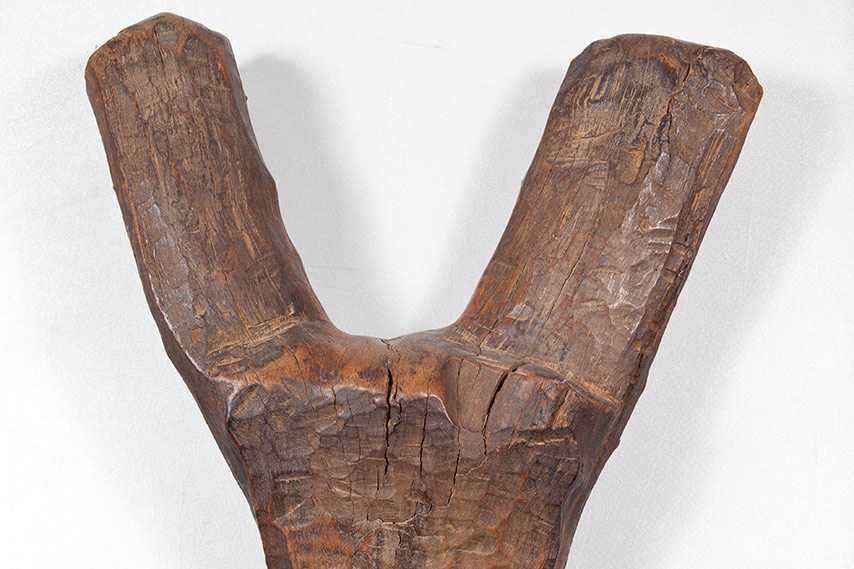 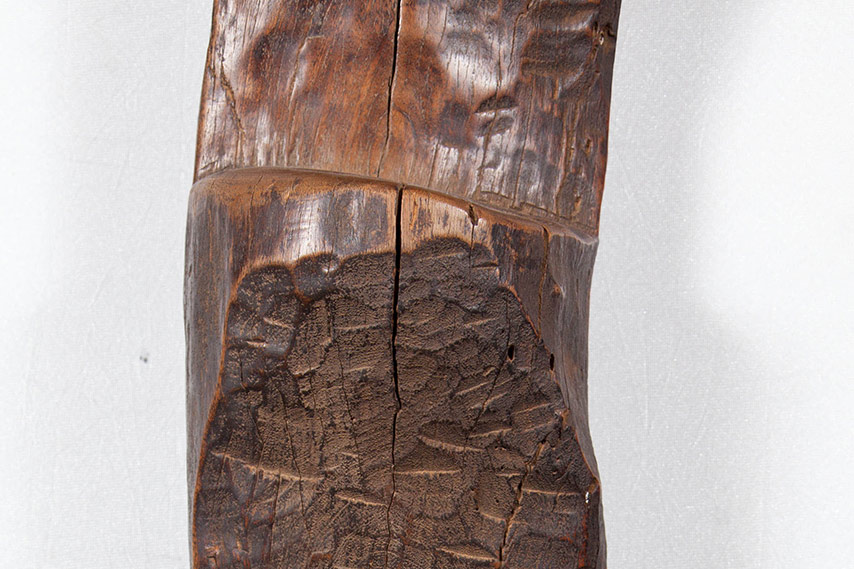 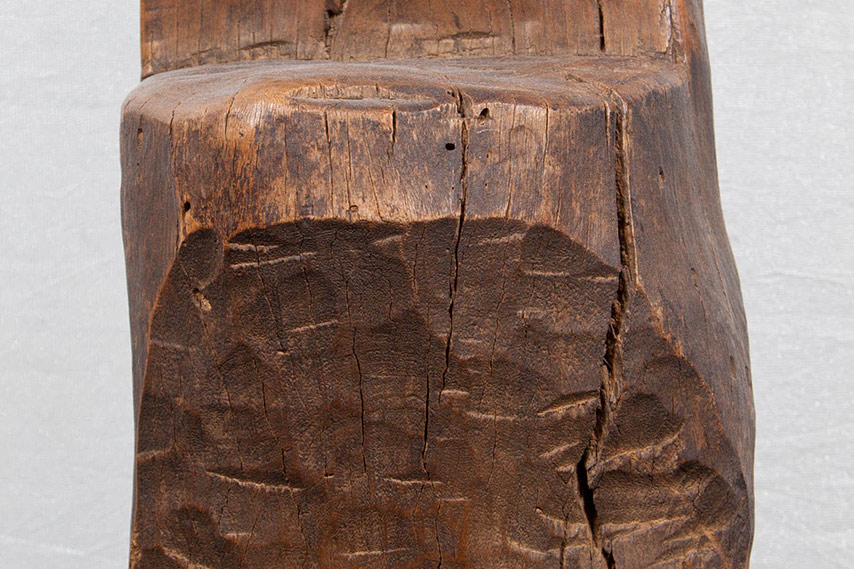 The Dogon mainly live in southwest Mali and parts of northwest Burkina Faso, constructing their adobe villages among the cliffs in an area that is relatively inaccessible and rugged. Agriculture is an essential part of survival and the Dogon primarily grow sorghum and millet for local consumption and onions to sell in markets as a cash crop. Granaries for storing sorghum and millet play a particularly important role in Dogon life, and in a typical village granaries may even outnumber houses. When looking at a Dogon village one can easily distinguish the pointed thatch roofs of the granaries from the flat roofs of the houses, which are used for everyday chores such as drying foodstuffs or for sleeping on warm nights. Elevated granaries protect the crops from humidity, vermin, and theft and also serve as a symbol of wealth and status for the owner.

The Dogon construct different types of granaries for women and men, with “female” granaries (called guyo-ya or guyo toteri) used to store a woman’s personal belongings and “male” elevated granaries (guyo-ana) used for storing millet and sorghum. The guyo-ana “male” granary is the type that requires a ladder in order to reach the upper level, and each day a man will go to the granary to retrieve the grain necessary for family meals, reinforcing his role as a capable provider. A second type of granary for men, guyo togu, is much rarer and is a special and honored dwelling place for very old men.

Ladders and granaries clearly serve a utilitarian purpose, but whether they serve a more significant symbolic meaning is debated. One of the first scholars to work among the Dogon, the French ethnographer Marcel Griaule, suspected that granaries held an important place in an elaborate creation story as a sort of “Noah’s ark” for all living things at the beginning of time, though more recent scholars question this.  It has also been suggested that miniature granary ladders created by the Dogon are made to help the spirits of the ancestors climb up onto the roof of the house where the ancestor’s altar is generally located.

The Dogon are among the most well known and most studied people groups in Africa, and are especially popular with tourists seeking an “authentic” African experience untouched by time or modernity. In truth, the Dogon have been adapting and evolving through time just like any culture, and the tourist trade itself has had a large impact. The Dogon have adapted masks and ceremonial dances to cater to tourists, and the natural evolution of their traditions to include new materials and characters has stagnated as a result of tourists desiring to see “traditional” Dogon life. The high prices that collectors and tourists are willing to pay for “traditional” Dogon art has also resulted in many of the oldest and finest pieces being sold away from Dogon country. In particular, a drought in the 1970s caused many Dogon to abandon rural villages and sell their art and sculptures on the market in order to survive. Today Dogon masks, figures, carved wooden doors, and granary ladders can be found in most African Art collections.