This relatively light, wooden staff appears to have been made out of two pieces of wood, one for the shaft and one for the figure featured on the staff. Images of similar staffs suggest that this object has been broken. Pieces in other museums that are similar to this staff often measure 119-162 cm. With elongated, pointed breasts this figure is distinctly female. Additionally, the depictions of barbs and fins on the staff are distinct to the peoples who live in the Niger River Delta. Further, the teeth and eyes of the figure atop the staff are also distinct indicators found throughout the delta region. The staff is stained with a white pigment, of an unknown origin, however the pigment suggests that the object has been in use before. In Urhobo culture white is the color representative of water. The amount of white pigmentation on this object suggests that it may have been used in a ritual honoring the spirits of the Niger River and Delta. A fascinating aspect of this staff is that the female figure is carrying a hollowed out vessel on her head, backed by an eight-barbed, decorative piece. The vessel is being hoisted or lifted above the figure, even though the arms of the female figure have no clear joints, digits, or other distinctions.

Much like the ideas associated with staffs in western culture, the staff used by the traditional Urhobo society are used to represent prestige, but also nature, and spirituality. Also, before looking into roles of staffs and women in Urhobo culture it should be remembered that Nigeria is one of Africa’s most developed nations. It is unreasonable for anyone to believe that all members of Africa’s most populous nation practice, maintain, or ascribe to all the traditional beliefs of past Nigerian cultures. Furthermore, no one society in Niger Delta region is completely like another. However, we can still learn about one culture by looking at its neighbors. Because limited studies have been done on the Urhobo, the next best thing is to look at Igbo and Ido cultures because many Urhobo, Ido, and Igbo practices overlap and have sometimes been mistaken and attributed to one another.

Demographically Urhobo are relatively small in population when compared with much larger ethnic groups found in Southern Nigeria such as the Igbo, Yoruba, and Benin (not to be confused with the country of this name). The Urhobo inhabit the western fringe of the Niger River Delta “where a green rain forest belt descending from Benin City meets alluvial plains of the delta proper, in an area encompassing 5000 square kilometers,” (Foss:12). 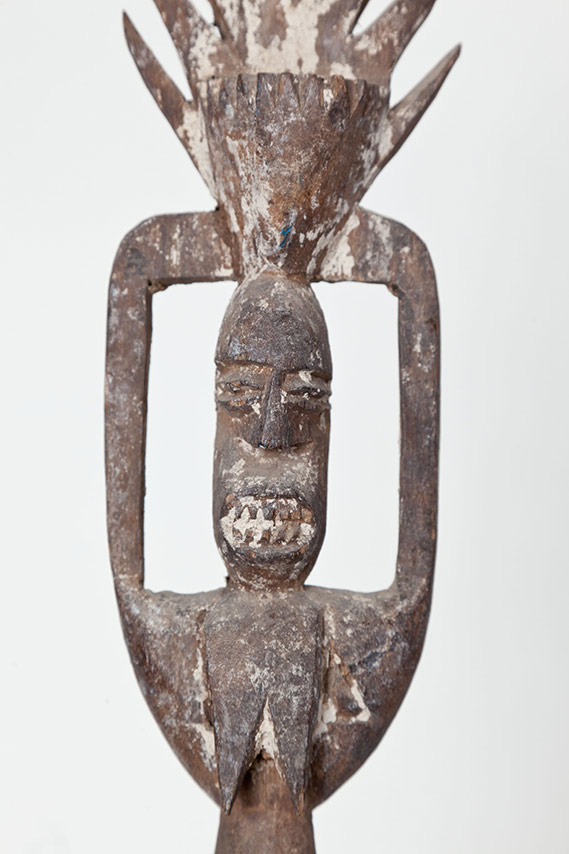 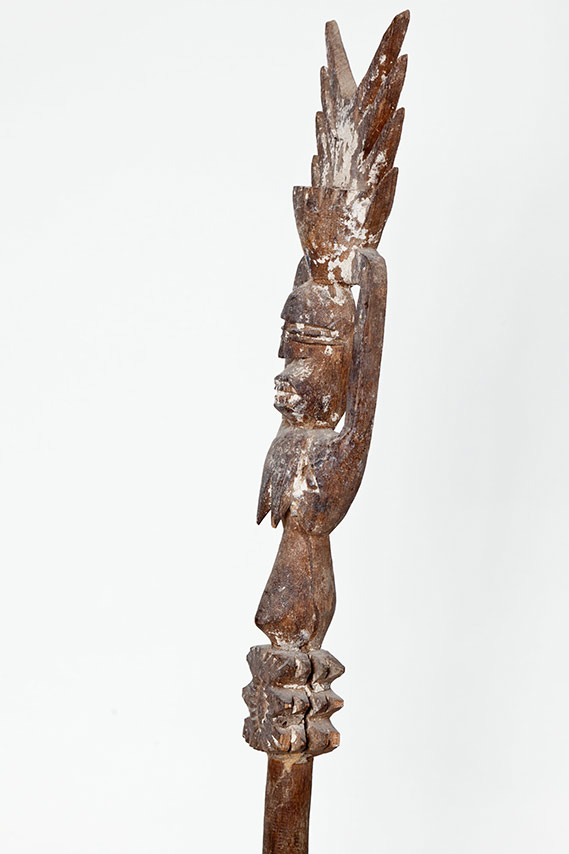 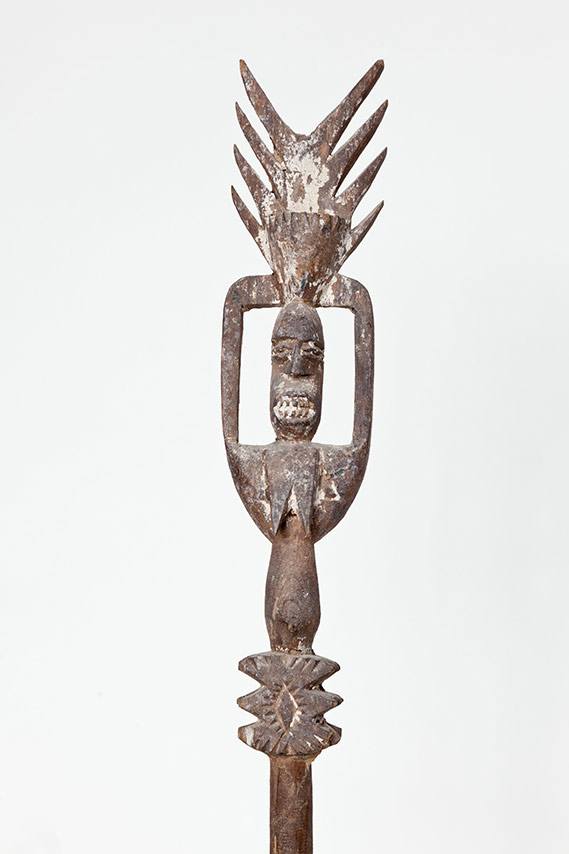 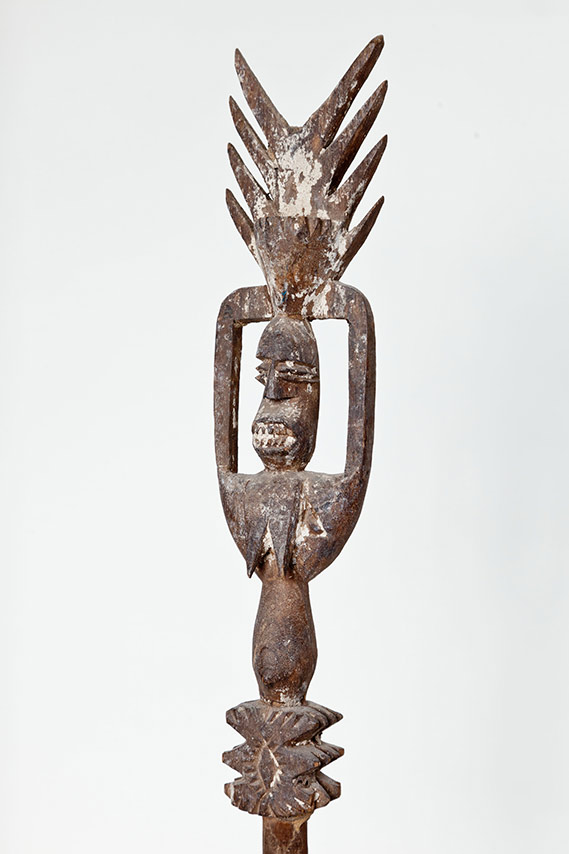 Traditional Urhobo maintain strong cultural beliefs and practices, and are deeply spiritual. A strong connection between water and spirituality thrives in the region and is found in their art, festivals, and customs. When looking at Urhobo art it becomes clear that the authority and wisdom of ancestors, as well as forces of nature are the two most important spiritual factors in the art of the Urhobo. Through their art, Urhobo artists often intend to please and entertain edjo, the powerful spirits that inhabit the region’s forests and rivers, as well as the air. These spirits, who preside in the realm of the dead, called erivwi, are found deep under the riverbeds. Traditional Urhobo believe that most good things come from the water spirits and they consider things such as the fish that come out of the rivers to be gifts from “the other side.”

Intricacy and aggression are two aspects often shown on the faces of figures, masks, and staffs of the Urhobo. These aggressive features, generally considered masculine, are supposed to invoke fear in mortals but are considered honorable and beautiful to god’s. These frightening faces depicted on Urhobo artifacts are also carved for the water spirit Ohwurhu, and often feature a sharply pointed jaw and barbed teeth, similar to the pieces in Pacific Lutheran University’s collection. Teeth are especially prominent in Urhobo art, their aggression invokes a sense of strong spiritual and natural power.

Although male representation is an overwhelming theme in the art of Niger-Delta region, feminine representation plays a key role in symbolism. The Urhobo live in a male-led society, but women also hold and take part in spiritual practices. Where as male figures often represent readiness and aggression, female figures in Urhobo art tend to be more closely associated with the water spirit. This is possibly because the care women take over children, is similar to the care found between the river spirits and the people (Foss:23).

One common image that occurs in Urhobo art, which can be found on one of the staffs in the PLU collection is the original female ancestor of the Urhobo. She is often pictured holding something above her head, has elongated breasts, and a large, toothy mouth. Foss states that she is called inene-ode “the mother-of-us-all” and is often featured only on the staffs and masks given to the elders of communities. These figures of females are also often white-washed with chalk and other sources of pigmentation, again, white being the color of the water spirit in Urhobo society. Additionally, chalk also can represent food and abundance, two things that come from the water spirits.

The Urhobo put on giant masquerade-like spectacles to invite water spirits to come into the communities for a time while they honor the spirits, nature, elders, ancestors, and persons of social and spiritual prominence. At the end of these rituals it is believed that spirits will depart and, hopefully, bring protection, power and strength to those who have taken part in rituals. The objects used in these rituals are usually only used once and then are placed in a personal shrine to represent the blessings and protections given from the edjo that was being honored in the ritual.

The Urhobo are a complex, fascinating people whose history and culture deserve further research and more attention within the context of West African and Nigerian history. Looking at their art, rituals, and culture is a great way to begin to understand the history of the Urhobo.