A Semester in Trinidad and Tobago 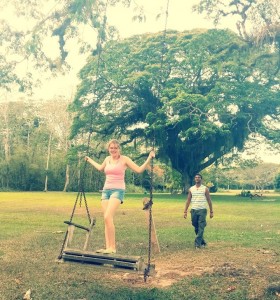 One day during the Fall of 2012, senior Aubrey Frimoth recalls a speaker that came to present to her Conservation of Natural Resources class. Why does this presentation, which she saw over two years ago, stick out so clearly in Aubrey’s memory? Captivated by colorful images of dancers, delicious food, and beautiful beaches, the speaker introduced her to the Caribbean island-nation of Trinidad & Tobago.  An Environmental Studies major with a Religion minor, the Trinidad & Tobago program intrigued Aubrey, because of the two-island nation’s reputation for racial and cultural diversity, “Having a great interest in social justice issues, being able to experience a culture with such a wide variety of backgrounds was an opportunity I had never been introduced to” recalled Aubrey.

Nearly a year and a half after that fateful day in Conservation of Natural Resources, Aubrey found herself in Tunapuna, Trinidad, the place she would call home for J-Term and Spring Semester of 2014.  The program focused on the culture and society of the Caribbean, however, Aubrey also had the opportunity to take classes at the University of West Indies (UWI) St. Augustine campus.  As a student at UWI, it was not hard to become immersed in the community. Aubrey joined school clubs including the Biological Society, connected with other UWI students, went on many a hike, attended university dances and faculty functions, and partook in the many festivals that take place in Trinidad and Tobago.

While she spent the majority of her semester in Trinidad, Aubrey did have the chance to visit Tobago twice. Between her time on the two islands, she met people from all over the world including Canada, Britain, and Sweden. So, though she did not leave Trinidad & Tobago during her semester away, she was still able to have an immersive and international experience.

When asked about her favorite memory, Aubrey’s story paints a stunning picture that practically transports you to the Caribbean, “During my home stay in Paramin, Trinidad, I found myself sitting atop a small garden path, beaten down guitar in hand.  The sky was light blue, greatly contrasting the multitudes of rich greenery spread out over rolling hills.  I could hear chickens crowing, dogs barking, and the rustle of trees.  The scent of mango permeated the air, and I began to play the guitar.  In that moment, combining the songs of the wind with my own, I came to a new realization of what home is.  I can be anywhere in the world, and as long as I’m with people who are loving and kind, I am home.”

Having returned to the U.S. at the beginning of the summer, what Aubrey misses the most is the pace of life on the islands, as well as the values of the culture of Trinidad & Tobago, “What I miss the most is the feeling of bliss that comes with a culture that values personal happiness over that of economic accomplishment in the global market – at least that is the feeling I got while living in Trinidad & Tobago.  Walking to the supermarket means learning the life story of at least two people.”

Reflection is a vital part of the study away experience and when Aubrey took a moment to look back at her time in Trinidad & Tobago, she realized that she had learned a lot about herself, “I am a woman.  I am white.  I am American.  I studied away in a country of predominately African, East Indian and Chinese roots.  I stood out amongst the crowd with my accent and my skin.  I was the minority, and yet, I still held a privilege of being white and being American.  While in sweet [Trinidad & Tobago] I checked a privileged within myself that I had never experienced before, while at the same time feeling what it is like to be surround by those who do not mirror my physicality.” Aubrey’s story is a great reminder to us all, to every once and a while, take a step back, and examine our place in the world.