A Semester in Oslo

When asking PLU senior Sarah Smith what significantly shaped her 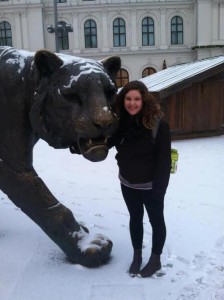 undergraduate experience, she responds with a concise, “study away”. During the Fall 2012 semester Sarah could be found in Oslo, Norway, where she was engaged in studying Peace & Conflict. As a double major in Political Science and Global Studies, she took classes pertaining to global governance and foreign policy analysis, as well as African politics and conflict.

“I decided to go there because it fit well with my studies”, she tells me. As PLU’s Oslo Gateway Program focuses on Peace & Conflict, it was a no-brainer for Sarah to sign up with this program, with all of her credits easily transferring into the area of her majors. Aside from academics, Sarah was drawn to Norway geographically, as she did not have any knowledge of the country prior to going.

Sarah tells me of her experiences in Oslo and how they shaped her in the course of only 4 months. “It allowed me to be in a new place where I didn’t know a single word in that language and just go. I have always been such a planner that needed everything to go in a specific direction. This experience taught me that not everything can be planned, and that’s okay”. Her experiences caused her to reflect on her time inside the classroom, but even more so on the importance on conversations outside of the classroom. Oslo initiated intense critical thought within Sarah, causing her to question her own political perspective and the foreign policy of the United States. By living in a country with very different perspectives on how to address issues, Sarah began to formulate just what peace, conflict, and foreign policy meant to her.

One moment that stands out in Sarah’s mind is when she had the opportunity to attend a CNN interview of that year’s Nobel Peace Prize winners. “It was a controversial year, so all of the questions were quite scandalous”, she tells me. Her group was invited to the Oslo City Hall to hear the responses of the recipients, and it only enriched her experience further to hear political conversation from some of the most prominent political thinkers in the world.

Following her study away experience, from here Sarah intends on remaining critical of foreign policy, as well as continuing to analyze exactly what peace and conflict mean. Her experiences in studying away have caused Sarah to develop a critical perspective on international relations that allows for her to understand her place in the increasingly-globalized world.