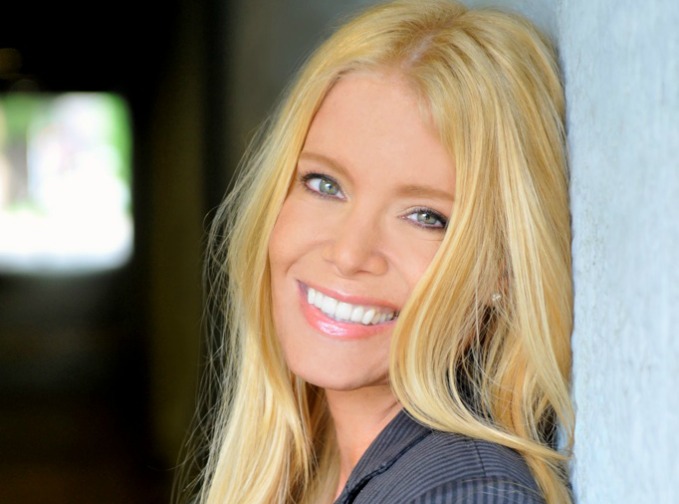 Change was in the air when Assistant Professor of Theatre, Dr. Lori Lee Wallace, came to PLU in fall 2012. This was the same year President Krise arrived as the 13th president of PLU, the Theatre program was taking on two new tenure-line positions, and the Karen Hille Phillips Center for the Performing Arts was near completion. During her first year, students took to Wallace quickly. After her first class students would stream out of her lecture, smiles plastered on their faces, raving about the new faculty member.

It was during the first weeks of her undergraduate program at University of Arizona, a conservatory program strictly focused on classical theatre, that she decided she wanted to be a professor.

“That was how extreme the impact was that those professors had on me,” Wallace says. “They changed my whole world in a matter of weeks and all I have wanted to do since then was have the same impact on students’ lives.”

After her undergraduate degree, she traveled to England to earn her MFA at University of Exeter. World-renowned Shakespeare expert, Professor Peter Thomson, drew her there. When she got to Exeter, she developed the impression that Thomson had been trying to retire for years, but as a student-favorite, they just would not let him leave. It was also during her time in Exeter when she studied with Phillip Zarrilli, who would become the topic of her dissertation, though she had no idea at the time.

“Some teachers do not impact your life until years later when you realize that you have been teaching elements of his or her work without even realizing it,” Wallace says.

For her PhD, she attended the University of Colorado. The Colorado Shakespeare Festival had also offered her a job as a dramaturg and she was given the opportunity to teach during her four years there.

At University of Colorado, it was the norm for PhD students to rotate the classes they taught – though most only taught one semester of Acting for Non Majors. It was not long before the department realized they wanted to keep her on to teach for BFA students. The wait lists for her classes were long and students were bringing her techniques to rehearsals and other acting classes. She had begun making her impact and could not be more thrilled. In total, she taught eight semesters of Acting I and Acting II along with Directing, Voice, and Auditions. During this time she was also given the opportunity to direct university productions. She was finally a director as teacher – exactly what she wanted to be.

During her final year at CU she began applying for jobs as a professor. She applied all over the country at several different types of universities. 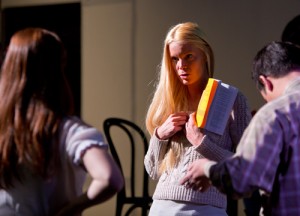 Lori Lee works with student actors as the Director of “How I Learned to Drive.”

“I remember thinking how extraordinary it would be if I found such a job in the Northwest, as my entire family lives in Portland,” Wallace says. “When I received the call from PLU, I was thrilled. It was the perfect fit, and I am extremely blessed to work here.”

What was your first impression of PLU?

My first days on campus, I remember thinking that everyone at this school is just so incredibly kind. Everyone looks out for one another and it’s a beautiful thing. It was wonderful to have my first year the same as President Krise.

It felt as though a wonderful transition was taking place and that I was a part of it. He is such an inspiring person and I am incredibly proud to have him as our president. He and Patty come to all of our theatre productions and it means a lot to all of us.

As a kid, what did you want to be when you grew up?

For a professor and a performer, I am surprisingly introverted and shy. As a child, I barely spoke to anyone, but once my mother put me on a stage (or in some cases, a coffee table at family reunions), I was in my element. I have been performing for as long as I can remember; I do not even think there was a time when I considered not performing or being a part of the arts.

What’s a typical day like for you at PLU?

Everything has changed now that we have the beautiful Karen Hille Phillips Center for the Performing Arts. I have never worked in such a beautiful facility. When we are in a production, all of us involved have incredibly long days on campus, sometimes 12 – 14 hours long. So, my office needs to be a sanctuary of sorts for me.

I start each day doing Fitzmaurice Voicework, for which I am a certified instructor. The PLU students who have taken my voice class will often join me, which is always wonderful. For spring semester, my first class of the day is Directing II, our advanced directing course. I then have a break for lunch and office hours, after which I teach one of two classes: The Audition, or Senior Capstone. I then have a very brief break before rehearsals begin at 6:00 p.m. and last until 10:00 p.m. This semester, I am directing Macbeth, which I am thrilled about.

What’s the best thing that’s happened to you since coming to PLU?

So many wonderful things have happened to me since I arrived at PLU, it is difficult to choose a favorite. My first production, Our Town, was a wonderful experience for me. I have always loved that play and the PLU students and faculty made the play something truly unique.

I continue to feel blessed to work in SOAC. The faculty, staff, and students are inspiring, extraordinarily kind, and supportive. We are a family here. I have felt that since my first days.

Who do you feel you are most influenced by in your work?

What do you do when you’re not at PLU? 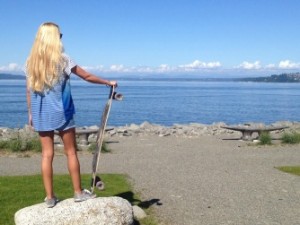 I love to travel, go to concerts, longboard on Ruston Way, and keep up my diligent search for Washington’s perfect hamburger.