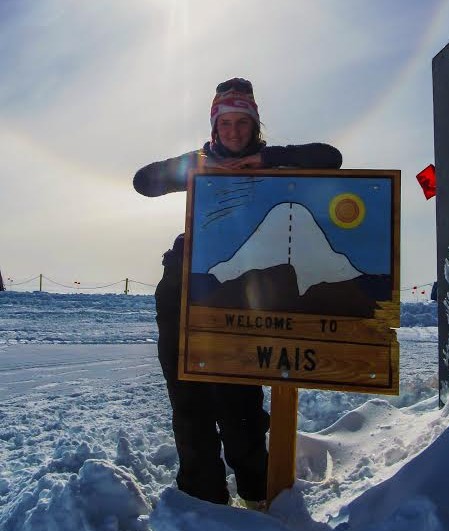 When Kirsty Palmer was busy studying towards her degrees in Global Studies and Hispanic Studies at PLU, she had no idea that she would one day live and work on Antarctica. What you or I see as the largest gathering of ice in the world, Kirsty sees as home, and has for the past year and a half.

In years previous, while looking into her collegiate options, Kirsty ultimately chose to attend PLU because of its notable study away department and the university mission statement’s focus on global education.  Taking advantage of the global opportunities laid before her, Kirsty boarded a plane bound for Valparaiso, Chile in the fall of 2010 to study for a semester. While there, she honed in on her Spanish language, focused on topics of social justice and human rights, and, in her own words, “grew into a whole new person”. She learned self-reliance, self-awareness, and a deeper meaning of what it meant to be a global citizen. For Kirsty, her time studying away in Chile helped her to “get out the front door…to see new places”, and to ultimately ignite the fire that would inspire her to see the world, experience new cultures, and lead her to her current home of Antarctica.

McMurdo Station is the United States’ Antarctic research facility, and the largest community on the entire continent, accommodating up to 1,200 people. At McMurdo, Kirsty is a steward, meaning that she mainly works in the galley serving food, cleaning the facilities, and has recently been promoted to working in laundry. It might not be the most glamorous work, but Kirsty appreciates and loves the international community of McMurdo and Antarctica, whether it be fellow stewards, researchers, cooks, or photographers. She has also had the opportunity to spend extended amounts of time in New Zealand, where she has gained further experience and connections with the global population.

One of Kirsty’s most memorable experiences while living on Antarctica was working at a field camp located on the West Antarctic Ice Sheet (WAIS) divide. Originally intended to last for one week, the field camp was delayed departure by a storm and ended up lasting for one month, with a handful of international researchers and McMurdo employees “stuck” together to get to know one another and experience the cold beauty of the continent.

Kirsty’s time on Antarctica will be coming to an end in October 2015 following the Antarctic winter. She is both reluctant and excited to depart, but finds overwhelming value with the time she has spent on the most remote location of planet Earth. Kirsty has grown as a person as she has traveled the world, and has developed an international web of connections that she would not trade for anything.