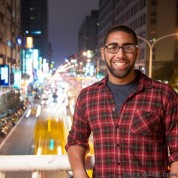 Mycal standing on a bridge in Taiwan

I graduated in 2012 with a Bachelor of Arts in Chinese Studies and Political Science. In Fall 2009, I studied conflict resolution abroad in Hamar, Norway under Nobel Peace Prize nominee Steinar Bryn. In Fall 2010, I traveled to Chengdu, China where I studied Mandarin. During the summer shortly thereafter, I was awarded the Wang Center International Research Grant which enabled me to conduct independent research on China’s ethnic minorities and minority nationality policy. Following graduation, I served as a US Department of State Fulbright English Teaching Assistant in Kaohsiung, Taiwan. While based in Taiwan, I spent my Fulbright experience teaching hop-hop dance and discussing how hip-hop emerged from within the black-American community. In addition, I served as the Media Coordinator for SinoNK.com, an online editorial that seeks to document and analyze various parts of Northeast Asia.

I am currently based in Chengdu, China, where I study Mandarin at the Southwest University for Nationalities. I also teach English to elementary school students. Beginning in Fall 2014, I will be attending American University’s School of International Service to pursue a Master’s of International Affairs in Global Governance, Politics, and Security. It is my hope that one day I can serve in East Asia as a Foreign Service Officer in the US Department of State.