A Year in Athens 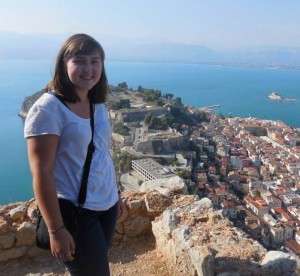 Erika Tobin transferred to PLU in the Fall of 2012 after spending one year at Luther College in Decorah, IA. A Senior Religion major and Classics minor who plans to graduate in May of 2015, Erika hopes to attend seminary to get a Master’s in Divinity and become an ordained pastor of the Evangelical Lutheran Church of America (ELCA). After meeting with advisors in the Wang Center and examining all of her options, she chose to spend her Junior year in Athens, Greece with College Year in Athens (CYA), one of PLU’s Approved programs. Erika ultimately decided to spend a year abroad because she wanted to have a longer experience in her host country and build on her experiences from the first semester. She remembers that many of her friends who spent a semester abroad only began to feel like they fit into their host country a few weeks before leaving. Erika told me that she wanted “to have time after the transition and culture shock stage[s] to just live in another culture and understand it more.” While Erika is not a city person and was worried about living in a city as large as Athens, the city is divided into many separate neighborhoods with their own bakeries and grocery stores that locals depend on, giving each neighborhood the feeling of a small town. The people who lived in her neighborhood were “wonderfully friendly and hospitable” and, even though she lived in the center of a sprawling metropolis, she was still able to see the stars at night. CYA was the best program for her for many reasons: there is a course offered on Ancient Greek which is important to studying the New Testament, Greece has such a rich religious history, CYA has a balance of structure and independence, and it fit perfectly with her major and minor. While in Athens, Erika was able to take classes in Modern Greek (which she was able to practice by going to cafés and talking to locals) and Ancient Greek, a monotheistic religion course, a religion class on Orthodox Christianity, a philosophy course, and an Archaeology course. Outside of school, she took a marble carving class and was able to bring her carving home with her. While abroad, Erika was able to travel a great deal, from built-in CYA programs to Crete, the Peloponnese, Northern Greece, and Southern Turkey, to personal excursions to Vienna, Prague, Budapest, various Greek islands, and Rome. One of Erika’s favorite moments from her experience abroad started at midnight on Easter morning. She and her roommate traveled to the island of Patmos and found themselves on top of a hill in a monastery, holding a vigil with around one thousand Greeks. Everyone had candles and was singing. She recalls, “When the clock struck midnight, fireworks were set off and bells rang and there was so much joy in the air, it was tangible.” The celebration only lasted about five minutes but it was incredibly powerful. Erika misses the food most of all from Greece, from gyros and octopus, to salata (Greek salad) to the wonderful bread. The most important lesson that Erika learned from her experience was the necessity to learn about other cultures to realize that not everyone thinks as Americans do. For example, the Greeks are incredibly selfless without expecting anything in return. Erika said, “I never would have learned what it meant to give selflessly in small ways in my day-to-day life if I hadn’t studied abroad in Greece, and I will cherish that knowledge and seek to repeat it forever.” -Article written by Maylen Anthony, 2014/2015 Sojourner Advocate