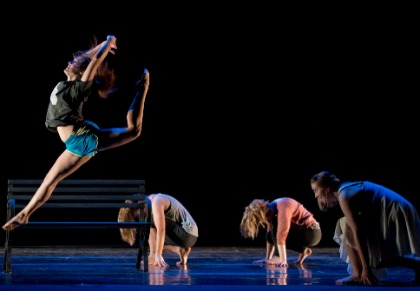 “Creating choreography takes great courage on the part of the choreographer, because it is a publication of their ideas for all to critique,” Peters said. “Dancing in front of an audience requires personal fortitude, because dance is an ephemeral art form. You only get the moment. There is no ‘delete’ or ‘revise’ during live performance.”

Peters says her rehearsal process is eclectic and collaborative.

“I like to have a plan, but I like to also completely let that plan go once I enter the studio if something interesting emerges out of the rehearsal process,” Peters said. “This, at times, can seem random to the dancers, so they have to have an immense amount of trust that something more concrete will evolve.”

Peters has been choreographing professionally for 10 years and is on faculty at Dance Fremont, Cornish College of the Arts, Cornish Preparatory Dance and the University of Washington. Her choreography gravitates towards the portrayal of the human experience, which was the inspiration for her Dance 2014 work Confine(less).

“I am fascinated by people and the contexts of their lives,” Peters said. “This way, the audience can connect to the dances since all people have the universal experience of being human.”

PLU student Mamie Howard is the choreographer of a piece titled The Submission, which examines Islamophobia. The piece was inspired by her passion for social justice and a book of the same name by Amy Waldman. Howard had to continuously review the novel and sketch out the story in order to create choreography.

“Dance Ensemble always has something to offer especially when you have a range of pieces from culture to social justice, etc.,” Howard said. “When thinking in the context of The Submission, I think people should come to get a taste of art that is thought provoking. It’s kind of like going to a really good documentary and walking away thinking ‘what can I do to help?’.”

Tickets are $8 General Admission, $5 Senior Citizens and Alumni, $3 PLU Community, Students and 18 and under.

Tickets are available at the Concierge Desk in the Anderson University Center, 253-535-7411 [credit/debit/cash), and can be purchased at the door before the show [cash only].