They call it the crows nest. On the top floor of the Karen Hille Phillips Center for the Performing Arts, the PLU costume shop is abuzz, preparing for Macbeth, which opens with a student preview on May 8.

The new space is, for all involved, a marked upgrade from the previous space, which was located in “the bowels of Eastvold,” according to veteran Costume Designer Kathy Anderson.

“It’s like we’re reconnected with the world again,” Anderson says. “Having natural light is so much better. Sometimes I’ll take a break and just look out the windows at the view of the trees.” 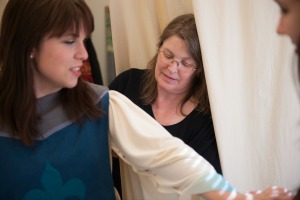 Now, rectangles of sunlight illuminate sewing machines, mannequins and labeled racks of tailored costumes as students pull needles through, or stand still while Anderson (right) tracks yellow measuring tape around an arm or a waist.

The costume shop also has noted a rise in efficiency in the new space, in part due to Anderson’s involvement in its design.

“They basically just gave me the ground plan and said, ‘What do you need?,’” she said.

For Macbeth, Anderson is especially excited about the shop’s new dye vat. She has been able to accurately match the soldiers’ costumes to paintings she’d found of Scottish armies from the late 1500s and early 1600s.

“I love costumes,” she says. “I have to get inside the head of every single character in the play.”

The hierarchy of costume design delegates most of the control and vision to Anderson, who then dispenses assignments to her student helpers. “She is the designer; we are her minions,” says Ali Schultz ’14.

There are times, however, when the students are granted creative control.

“Usually Kathy picks the designs and fabrics, but I have undertaken projects where there were no designs or fabrics,” Schultz said.

This really comes down to the scale of the production. Costumes for ‘Macbeth’ hang ready for rehearsals … and then the real performances.

For Macbeth, Anderson has optioned dark tones. “There’s lots of blood, lots of killing, but there needs to be some light moments as well,” she says, smiling.

“She’s really come alive in this new space,” Schultz says about Anderson. “It’s been a real gift to see how happy she is in that space. She’s an old soul for the theater department; working with her is a delight, truly.”