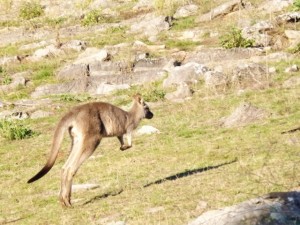 The University Jazz Ensemble and University Wind Ensemble will travel to Australia May 28 –June 11, 2013, to discover the “Down Under” and share their music with an international audience.

Traveling to Melbourne, Bairnsdale, Canberra and Sydney, 49 students will discover both the rural and urban aspects of Australia, and perform and participate in musical exchanges with local students.

The jazz ensemble, a student jazz big band, will perform a program of jazz standards and contemporary, original works. Performances will feature compositions and arrangements of such notable jazz composers as Duke Ellington and Thelonious Monk, and repertoire from historic big bands such those of Buddy Rich, Count Basie, and the Village Vanguard Orchestra. Styles will range from 1930s swing to funk, Afro-Cuban and Brazilian. Under the direction of Dr. David Deacon-Joyner, the ensemble performs five times a year, including the annual world-wide broadcast of the KPLU Christmas Jam program.

The wind ensemble will perform American and Australian music featuring Percy Grainger’s Lincolnshire Posy and other new music from American composers that will be tuneful and fun for both the ensemble and the audience. Under the direction of Dr. Edwin Powell, the ensemble performs four concerts on campus per season as well as appearing frequently at local schools, national conferences, festivals and special events.

The ensembles tour regularly both domestically and internationally, with their last international tour to China in 2009.

In addition to performing, the PLU students will visit an animal sanctuary in Melbourne featuring Australia’s unique native animals, view the famous Penguin Parade, be hosted by members of the Bairnsdale Sunrise Rotary club for three nights where they have entrance to an Indigenous Cultural Centre, see the Australian War Memorial in Canberra,

and go on a guided tour of the Sydney Opera House. The opportunity to explore all facets of Australia, geographically, musically, and culturally is sure to be an unforgettable experience.

Friends, family and fans can follow along with their Australian adventures on their blog athttp://plumusicdownunder.blogspot.com/