The Northwest High School Honor Bands will feature music performed by approximately 250 of the finest high school musicians from Idaho, Oregon and Washington. These outstanding high school students are recommended for participation in the event by their high school band directors and the concert is a culmination of two days of intense rehearsals with guest clinicians.

Honor Band is hosted by Pacific Lutheran University under the direction of Dr. Ed Powell and Dr. Ron Gerhardstein.


As of Saturday, March 12, 2022 the PLU campus has moved to a mask-optional policy in concert with changes at the state level and recommendations of the Tacoma-Pierce County Health Department. In addition, the university will no longer mandate proof of vaccination for visitors attending campus events.

Patricia Cornett is the Director of Bands at the Temple University Boyer College of Music and Dance where she conducts the Wind Symphony and teaches advanced conducting. Prior to joining the faculty at Temple, she was the Director of Bands at Cal State Fullerton where she conducted the Wind Symphony, Symphonic Winds, and taught courses in conducting and music education. She was also a Visiting Assistant Professor at SUNY Potsdam’s Crane School of Music.

Cornett taught at Essex High School in Essex Junction, Vermont from 2007-2010 where she conducted three concert bands, jazz band, and taught courses in guitar and history of rock. She was also the Director of Instrumental Music at Woodland Regional High School in Beacon Falls, Connecticut, from 2003-2005. She is published in the Teaching Music Through Performance in Band series, the CBDNA Journal, and has presented sessions at national CBDNA conferences, as well as numerous state conferences. She is a member of the College Band Directors National Association, the Conductors Guild, the Pennsylvania Music Educators Association, and the National Association for Music Education. 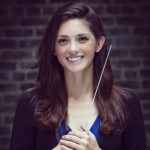 Kaitlin Bove is Director of Instrumental Ensembles and Assistant Professor of Music at Pierce College in Puyallup, Washington where she teaches courses in music theory and music electives in addition to band, orchestra, and chamber ensembles. In 2020, she was the recipient of the campus-wide “Outstanding Faculty of the Year” Award.

Kaitlin holds a Doctorate of Musical Arts in Wind Conducting from University of Kentucky where she was a conducting student of Cody Birdwell and a teaching assistant with the wind band program. During her premier her dissertation project wind band transcription of Caroline Shaw’s Partita for 8 Voices with the UK Wind Symphony and Choristers.

Kaitlin is founder of the And We Were Heard initiative which matches underrepresented composers of wind band and orchestra literature with volunteer ensembles in order to generate quality recordings of the music of diverse compositional voices.

Dr. Bove is from Lafayette, California and earned her Bachelor and Master of Music degrees in Education from the University of the Pacific in Stockton, California where she studied with Eric Hammer. She served as Director of the Pacific Pep Band from 2007-08 and held the position of Graduate Assistant of Bands during her master’s coursework. In addition, Kaitlin served as the Interim Director of the University Concert Band in Spring 2012.

Dr. Bove is a founding member of Girls Who Conduct and a member of the National Band Association, College Band Directors National Association, Women Band Director International, and the scholarship committee for Lift Up Our Voices. She enjoys working with local music programs and educators as well as directing honor bands and adjudicating festivals across the United States. She is also an active arranger and transcriber with works for band available through Murphy Music Press.

High school directors, please use the link provided below to nominate and recommend students that you would like to participate in the Northwest High School Honor Band. The nomination deadline is October 10, 2022 at 4pm. We ask that before nominating a student, please check with each student concerning their availability. There is a participant fee of $125 for each student participating in the Honor Band.

Honor Band Registration will be made available following the designated nomination period.

Once nominations have been reviewed Honor Band participants will be notified of acceptance via email and provided access to registration. Once received, please complete registration and payment using the link provided by December 15, 2022 at midnight.

Please note that no refunds will be allowed after event registration has been completed, and no registration or payment will be accepted following the deadline of December 15, 2022 at midnight.

After participant’s check in on January 6th, chair placement auditions will be held in various rooms in the Mary Baker Russell Music Center. Please open and print the PDF version of your part for your instrument and practice prior to the January 6th check in.

The concerts are held in Lagerquist Concert Hall in the Mary Baker Russell Music Center. Free Admission / No Tickets.

General information regarding your time at PLU for Honor Band

ATTIRE: For the performances, students should plan on wearing standard concert attire that they would normally wear for school performances. Aside from the concerts, casual dress is appropriate.