Originally premiered in 1960 at the Aldeburgh Festival, Britten’s evocative score has a rich harmonic texture, beautiful lyrical music and moments of baroque and florid music.

Britten pays attention to the Shakespearean play’s central theme: the madness of love. The plot follows that of the play, though Britten cut much of Act I and re-ordered scenes. Music tends to lengthen the duration of text, but anyone who knows the play will recognize the story.

Jim Brown, vocal chair and director of A Midsummer Night’s Dream, is updating the opera to modern day Central Park in New York City- for a sort of “Shakespeare in the Park” production, Brown explains. 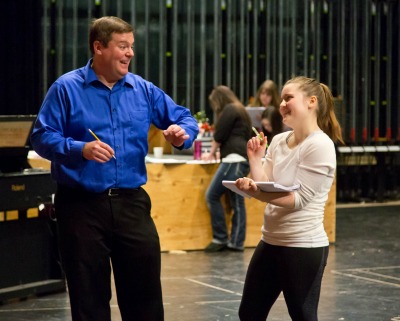 “We are using the many wonderful new features of the Phillips Center – including the great fly system,” Brown says. “We will be able to create different scenic looks of the ‘forest’ with this. It is a beautiful space and the students are thrilled to be performing there.”

“I love introducing new works to students and seeing the fresh ideas they bring to a centuries-old art form,” Brown says.

Each year Brown looks for operas with a large cast in order to accommodate as many students as possible. He also double casts many roles to offer more students the chance to learn and perform an entire role.

Currently students are rehearsing every day from noon-5pm. In the mornings, cast members travel to area high schools for outreach.

“This has been extremely successful! So, we have very full days, but we are loving the opera immersion,” Brown says.

Tickets can be purchased through the PLU Campus Box Office at the Concierge desk in the Anderson University Center and on the phone at 253-535-7411.  Tickets are $15 General Admission, $10 Senior Citizens (55+) and PLU Alumni, and $5 for PLU community, students, and 18 and under. Shows on January 23-25 start at 8pm with a final matinee at 3pm on Sunday, January 26.