Image: Choir of the West members prepare to board the bus at Pacific Lutheran College in 1939 for a 3,000-mile tour. (Photo courtesy of Lorna Vosburg Burt)

Editor’s Note: When Lorna Vosburg Burt ’40, ’69 read our story on PLU’s annual Christmas Concerts in the winter 2013 edition of Scene magazine, she was inspired to recall—and share—her own Choir of the West story … from 1939. It was so full of history and facts and fun, we wanted to share it with everyone. Writes Lorna: “Now at 93 years old, this trip remains very vivid in my memory!”

I was just 19 years old, a student at Pacific Lutheran College and a member of the famous Choir of the West, which was leaving on a 3,000-mile tour of the Pacific Coast, including daily concerts at the 1939 World’s Fair in San Francisco.

We were honored to represent the state of Washington in a Golden Jubilee Celebration at the Fair. (Washington was admitted to the Union Nov. 11, 1889, and we were celebrating 50 years of statehood.)

It was June 7, 1939, and a crowd had gathered in front of PLC, including a news reporter and photographer, to wish us well on our important mission. Dr. O.A. Tingelstad, president of PLC, shook hands with the choir director, Gunnar Malmin. The fully loaded bus, plus two full cars, headed south, carrying the 43-voice Choir, and its director and chaperones. 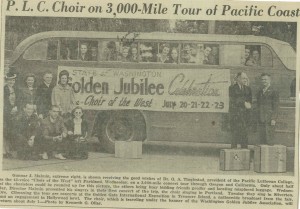 In 1939 there were no freeways. We wound through every small town along the way at 35 mph. There were no cellphones or iPads either, of course, so to pass the time we read, talked, played trivia games and sang the popular songs of the day in eight-part harmony.

It was a pleasant ride to Portland, our first stop. On arrival, we went directly to radio station KALE, where we put on a 25-minute program.

That night we gave our first church concert of the tour at Bethlehem Lutheran church—“our best ever,” said Malmin.

The next morning we were back on the bus, and excitement rose as we neared the Golden Gate Bridge, which had been open only two years at the time. Crossing over into San Francisco, the choir burst into song: San Francisco, open your Golden Gate.

Our first morning there, we took the 20-minute ferry ride to Treasure Island, which was totally dedicated to the World’s Fair. We could see the “Tower of the Sun” bidding us welcome.

We were instructed to go immediately to the broadcasting studio, where the choir would present a nationwide concert, one of several airing coast-to-coast on the radio. (No television in those days!) The announcers emphasized that listeners would hear “the famous Choir of the West”!

After broadcasting, we made our way to the impressive Washington Building, representing the history, arts and activities of our state. A sign in front announced the times of our two daily performances, and inside choir members donned heavy, gold satin robes. Standing beneath a wall-sized picture of Mount Rainier, we sang to a filled concert hall, beginning with Hail to Our Washington and ending with Beautiful Savior.

Between concerts, we were free to explore the fairgrounds and explore all the exhibits. My best friend/roommate, Leola Lockwood, and I were fascinated by the automatic telephones of the future—all you had to do was dial a number with your finger!

In my diary I wrote, “The fairgrounds are very lovely, with beautiful fountains, trees, gorgeous flowers and greenery. It is like a miniature city. At night, it is breathtakingly beautiful with a myriad of splendidly colored lights playing on the buildings and fountains.”

The summer was whizzing by, and soon it was time to say goodbye to the World’s Fair, and our friends and host families.

But we had a special appearance to make in Hollywood! The choir was extremely honored to be invited to join the International Lutheran Choral Union in a 2,000-voice choir in the Hollywood Bowl.

Inside the enormous cone-shaped structure, we sang a special program under the direction of world-renowned composer F. Melius Christiansen of St. Olaf College in Minnesota. What a stunning appearance he made as he stepped onto the platform: He had white hair and was dressed in white from head to toe—even his baton was white! 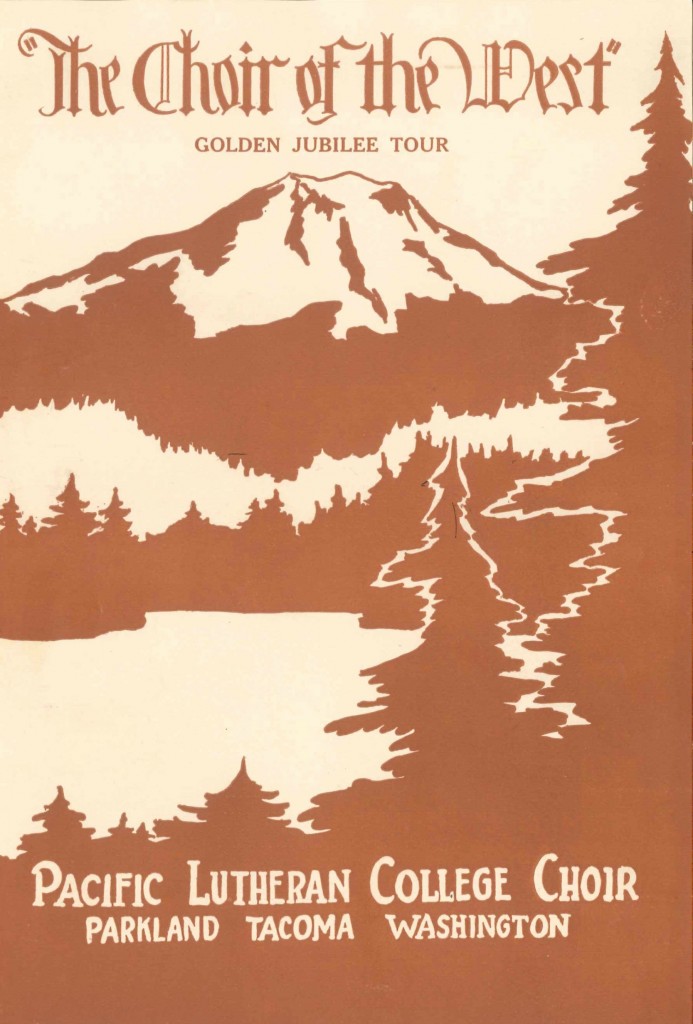 People from all over the world attended, and when the concert ended, the audience stood and cheered. It was a thrilling experience for all of us.

By this time, the choir had become one big, happy family. We completed the 3,000-mile journey by returning along the Pacific Coast Highway, singing in Lutheran churches, visiting towns and having picnic lunches on warm beaches.

All too soon, we were back in Washington. Home again at PLC, all we could say was, “Wow. What a trip!”