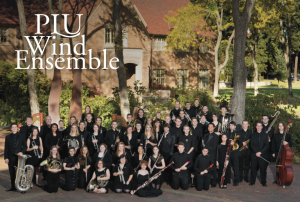 Lutes played to more than 800 students, band directors and music lovers who packed the house at the Western International Band Clinic on Saturday, November 21, 2015. The PLU Wind Ensemble was featured during the festival’s Saturday night performance and was one of only four groups selected to perform and the only band selected west of Texas.

“Our students were professional and played beautifully. Through many tight time windows and unexpected difficulties, the students stayed cool and delivered,” Ed Powell, PLU Wind Ensemble director, commented. “It was their best performance of the year thus far.”

The clinic was a three-day event featuring many guest performers, including the Canadian Brass and PLU’s professional ensemble, the Lyric Brass Quintet.

“The feedback was overwhelming. [Guest conductors] came up to me after the performance to gush. I heard over and over ‘What an amazing performance,’ ‘Your students play with so much heart,’ and ‘The artistry of your ensemble blew me away.’” Powell remarked. “Naturally I was flattered and proud of our students.”

The University Wind Ensemble will tour to Eastern Washington and Portland this spring and return for a homecoming concert on Tuesday, March 15, 2016, at 8pm in Lagerquist Concert Hall.