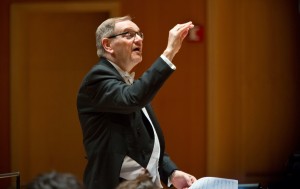 Music Scholarship concert for A PLU Christmas on Saturday, Dec. 13, 2014.

Richard Nance is Director of Choral Activities at Pacific Lutheran University, where he conducts the Choir of the West and Choral Union.  He also teaches the choral conducting sequence and supervises student teachers. Prior to coming to Pacific Lutheran, Dr. Nance taught at Amarillo College and in public schools in Texas and New Mexico. Nance holds bachelors and masters degrees from West Texas State University and the DMA degree from Arizona State University. He has studied conducting with Hugh Sanders, Douglas McEwen and David Stocker, and studied composition with Joseph Nelson and Randall Shinn.

Dr. Nance is an active member of the American Choral Directors Association, and has served as ACDA President for the state of Washington, President of the Northwestern Division, and as the Choral Reviews Editor for the Choral Journal. Six choirs under Nance’s direction have been selected to appear at ACDA regional conferences. He conducted the PLU Choral Union in performance at the 2001 ACDA National Convention in San Antonio and the Choir of the West at the 2013 ACDA National Conference in Dallas. The Choir of the West was selected to be a featured choir at the 2015 National Collegiate Choral Directors Association Conference, and presented a concert under the direction of conference headliner Simon Carrington. Dr. Nance’s choirs have toured Europe on several occasions and have appeared at prestigious festivals, winning Gold awards at the 2011 Harmonie Festival in Lindenholzhausen, Germany (Choir of the West) and the 2014 Florence International Choir Festival (Choral Union Tour Ensemble). Under Nance’s direction the Choir of the West and PLU Chamber Singers won Gold certificates and first place in three categories at the 2015 Anton Bruckner Choir Competition in Linz, Austria, and Choir of the West received the “Anton Bruckner Award” for winning the entire competition.

Richard Nance has been recognized for his work as conductor and scholar, having received the 2011 and 2013 “American Prize” for Choral Conducting, the “Outstanding Conductor” award at the 2014 Florence International Choir Festival, and the 2013-2014 K.T. Tang Faculty Excellence Award for Research from Pacific Lutheran University. He has twice been granted Regency Advancement Awards at PLU. In July of 2010 Dr. Nance received the Washington State Leadership Award from the American Choral Directors Association, and in 2016 he received the ACDA Northwestern Division Leadership and Service Award.

Dr. Nance served as Director of Music at St. Mary’s Episcopal Church of Lakewood from 1996-2009, and is an active clinician and adjudicator. His compositions have been published by Hinshaw Music, Walton Music and Colla Voce Music. Dr. Nance was chosen to write a commissioned work for the Washington All-State Choir in 2002, and wrote the 2002 Raymond Brock Memorial Composition for the American Choral Directors Association, one of the highest honors to be awarded to a composer of choral music. Other recipients of this award include: Samuel Adler, Daniel Pinkham, Eric Whitacre, Gwyneth Walker, René Clausen, Gian-Carlo Menotti, Morten Lauridsen, Mack Wilberg, Steven Sametz, Dominick Argento, Alice Parker, and Ola Gjeilo.