You may have seen him tearing up the stage in Lagerquist Hall or starting an impromptu concert in the UC. Maybe you recognized him from America’s Got Talent “YouTube Acts Compete.” Or, if you were in Seattle last weekend, you may have seen the young bright-eyed face on stage at Seattle Opera’s production of La Boheme.

Rehearsals for the universally popular classic began in January and since then Marzano has been leaving campus right after Choir of the West practice to head up to Seattle.

“The good thing about La Boehme is that the chorus isn’t on until act two,” Marzano said. “I get to sit backstage and watch act one. I’m just trying to take in everything I possibly can from this experience.”

Marzano, who plays a French soldier in the production that opened Feb. 23, comes on stage in the second act with another soldier to grab lunch in the town café, where he encounters the main character, the town flirt, Musetta. (He said that’s why he was caught with such a dumbfound look in the photo we got of him.) His character returns in the third act to go to a pub with his friends. 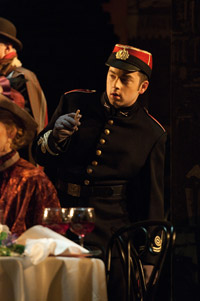 John Marzano ’13 played a French soldier as part of the chorus in the Seattle Opera’s production of La Boheme. (Photo by Elise Bakketun)

The role may not sound that exciting, but that’s part of what makes this play different from others Marzano has performed in.

It’s also unique because it’s not very chorus heavy, leaving Marzano, the youngest member of the group, the opportunity to watch his peers perform in the first and fourth acts.

“I just sit backstage and I admire these very, very successful opera singers doing what they’ve worked so hard to do,” Marzano said. (SPOILER ALERT) “When she dies at the end, you feel that hurt and grief that everyone else is feeling. I cry everyday.”

After wiping away his tears, Marzano washes off his makeup and heads back to campus, where the vocal performance major has a full schedule between classes and leading PLUtonic, PLU’s men’s a cappella group that won the International Championship of Collegiate A Cappella quarterfinals competition in February.

The Tacoma-native admits it’s not easy to manage so many commitments, but he says it’s well worth it.

“Me not being the greatest multi-tasker in the world it is a challenge, but it is a challenge I would not give up,” Marzano said. “This is what I love to do and this is what I’m here at school to study doing. I try to view them as kind of in the same boat. I’m here learning what I’m doing at 7 p.m. that night. The only thing that is a bummer is the commute. That’s the only downside. Everything else, all the time I put in rehearsing, is just the name of the game. I learn no matter what I’m doing.”

Marzano, who has performed at the Vashon Opera, Lakewood Playhouse and at PLU, has already been invited to perform in Seattle Opera’s summer production, The Ring, which is set to run Aug. 4 to 25.

“I hope to be in as many productions as I can before I go off to grad school,” said Marzano, who will graduate in the fall. “Right now it’s all about experience, getting out there and going through the motions and doing this stuff, so when I do become a professional opera singer and go out in the real world I will have that to work from.”