Erik Steighner, who teaches applied saxophone at PLU, was one of four solo winners in the 26th annual Frances Walton Competition. In addition to prize money, Steighner will go on a six-day winner’s tour September 13-18, 2015.

When Erik Steighner was preparing to compete in Seattle earlier this summer, he didn’t want to give the judges an excuse not to pick him. That’s why, even though it’s not his favorite thing to do, he opted to perform from memory on the chance it would give him a leg up on his competition. It also helped that his partner Angela Draghicescu, a collaborative pianist, knew how to respond instantly to any expressive decisions he might make. 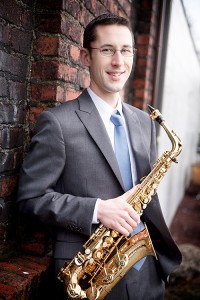 His competition repertoire included Robert Muczynski’s Sonata, a short piece with both slow and fast movements making it perfect for competitions; Christian Lauba’s Worksong, a work full of technical fireworks that showcases how some composers are writing for the instrument today; and the tuneful Fantaisie by Jules Demersseman, one of the earliest works written for the saxophone — the perfect “dessert” following two heavier works.

“In competitions you can be supremely prepared, but depending on who the judges and other competitors are, you can still come away empty-handed,” Steighner commented.

The success was sweet; he had competed at this competition five times before, but the best he had achieved was Alternate Winner. In the end, he decided to practice what he teaches, and persevere. When he won, the relief was palpable.

“As much as you don’t like to think that you need validation from outside sources, it does feel good to have a panel of excellent musicians affirm that you’re on the right path with your playing,” explained Steighner.

During the tour, the saxophonist will perform several formal recitals in Snohomish, Kirkland and Sammamish. He’ll also perform on KING-FM’s “NW Focus LIVE” and visit schools around the I-5 corridor for performances and masterclasses throughout the week. His tour repertoire will include much of the music he won the competition with.

The tour will kick off a busy season for Steighner. Classes resume at PLU and he’ll be busy teaching lessons, chamber music, and ear training in addition to maintaining his private studio. He’s also starting a South Sound Saxophone Ensemble comprised of local saxophonists (including several PLU alums). Finally, he is organizing an “unconference” for music teachers at PLU on October 3, 2015.

To learn more about Erik and view his tour schedule visit his website at http://eriksteighner.com.