Meet John F. Paul, the new Chair of the Department of Music and Associate Professor at Pacific Lutheran University.

Before joining the PLU family at the start of the 2014-15 school year, Dr. Paul served for 13 years as Chair of the Department of Music at Marylhurst University near Portland, Oregon.

Dr. Paul is an active composer in both traditional and contemporary formats.  He is a former composer and audio group manager of Atari Games/Time-Warner Interactive. Paul’s video game credits include the music scores and sound-designs for Gauntlet Legends, Maximum Force,  Pit-fighter, and Wayne Gretzky’s 3-D Hockey. His original score to FW Murnau’s silent film City Girl has been presented at the Oregon Sesquicentennial Film Festival, Astoria Music Festival, and by the Vancouver (WA) Symphony.

Between getting acquainted with 50+ music faculty, becoming familiar with PLU’s unique music programs and administrative processes, teaching and going to concerts on campus (the department puts on more than 140!), Paul manages to find time to explore his new town with his family.

What was your first impression of PLU?

While I had heard good things about PLU over the years, my first real encounter with the school was at last year’s Christmas concert in Portland.  I was impressed by the high level of music making by everyone on stage, ensembles and soloists.  Wow!  And then the audience sang the first carol, and I mean, really sang!  I felt I had arrived at some sort of musical utopia.  I had known that a large number of undergraduates participated in some aspect of music, but hadn’t realized at what level.  I was impressed that music was such a significant aspect of the university.  And then the search process was so well done: very thorough, thoughtful and inclusive.  Here was a place I felt at home, with colleagues I respected, with similar values that I held, and having a significant impact upon the community.

“I was impressed by the high level of music making by everyone on stage, ensembles and soloists.  Wow!  And then the audience sang the first carol, and I mean, really sang!  I felt I had arrived at some sort of musical utopia.”

What’s a typical day like at PLU for you?

There is never a typical day, it is always different.  But generally speaking, each morning I will be teaching, preparing to teach, or grading.  Then I might have an advising appointment with a student, or teach a private composition lesson.  I will probably be meeting with a music faculty sometime during the day.  I meet with each full-time faculty member once a month, to get to know them, and to discuss issues and concerns that they may have.  Several times a week, I will walk over the University House to have lunch with other faculty and staff, so I can gain a wider university-level perspective.  There is always some type of group meeting during the day:  with the entire music faculty or in smaller committees discussing curriculum or recruitment or performance, with SOAC leadership, or with other departments to discuss the Christmas concerts or commencement weekend.  Then there is a report or letter that needs to be written, so I try to wrangle some time to work on that before its deadline.  And then just when you think you have things under control, some sort of crisis comes out of left-field that needs your attention.  While I will try to leave around 5 each evening to have dinner with family, there may be an evening concert that I will want to return to campus to hear, or if that is not possible, view on live streaming.  It tends to be a long but very energizing day.

You’re new to the area, what have you enjoyed most about your move?

My wife is from the Seattle area so we are not strangers to the area.  But we never spent much time in Tacoma, so we were surprised how vibrant the city was.  The day before my campus interview last spring, I took a run along Ruston Way.  The sun was out, Mt Rainier loomed in the distance, the water sparkled.  I was hooked from that moment on!  (And yes, being from the Northwest, I understood that the weather would change at some point!)

Talk about your work composing for movies and video games - what was your favorite project, and how has this work shaped who you are as a composer and teacher? 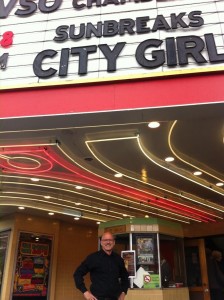 I took a job composing music for video games right after graduate school.  I wanted to try my hand earning a living as a composer before beginning my teaching career in earnest. After spending most of my life in the Midwest, I loved being out on the west coast, especially the San Francisco Bay Area. Being a composer working with programmers, engineers, artists, and game designers taught me a lot about collaboration and teams.  We were trying to come up with unique game worlds. Music and sound were key elements in this process. So whether it was a shooting game that needed an action/thriller score, a Medieval fantasy game that required an epic symphonic soundtrack, or a puzzle game with light jazz in the background, I was challenged everyday to create something distinctive, likable and effective. I needed to listen to my team-mates’ comments, but also needed to know when to advocate for my own vision. This background has been incredibly useful when I moved back to teaching and moved into academic leadership. So much value is given to collaboration and inclusion, rightly so. My other take-away from my years composing for movies and video games as the strengthening of my own compositional craft. Every day I needed to produce. There was no time to wait for inspiration to hit or to get stuck by writer’s block. I developed a set of tools that helped me generate ideas and materials from a variety of sources. I am able now to share these with students as they come against a wall, getting to a point but not knowing how to move forward. It is gratifying to see them take these same tools and develop their own voices as we meet together.

But working in video games, I became increasingly uncomfortable with the direction games were going, as they became more violent and graphic. When I finally left the industry to resume my teaching career, it became my intention to use my compositional talents for more noble purposes. My favorite project to date is a score to an actual film, FW Murnau’s 1928 silent classic City Girl.  The film, I believe, is a work of art, not something of fleeting value like most video games. City Girl was one of the last silent films to be released, and unfortunately fell into obscurity immediately afterwards. One of my goals with this project was to bring more awareness to the film. With realistic acting, crisp cinematography, and themes of family violence and women empowerment, I felt it had something to say to contemporary audiences.  It has been well-received at every performance.

Dr. John Paul conducts a local quartet performing his score to the silent film ‘The City Girl,’ during the Oregon Sesquicentennial Film Festival at Marylhurst University.

What were some of your biggest challenges and successes in your position at Marylhurst?

While Marylhurst had a tradition of a strong music program, it was struggling when I arrived with low enrollment and low standards. The university had just established a music therapy program, and so we needed to get our musical standards up to a professionally high level. Much of this work was done with part-time faculty, getting them to think beyond the status quo and to envision a future informed by the school’s ideals of “competence, leadership and service”.  During the 11 years I was there, we were able to increase our standards and enrollment, adding faculty positions in music theory, choir and music therapy. About the time the job opening at PLU was published, we hosted noted composer Morten Lauridsen in a sell-out concert at Trinity Cathedral (Portland). I realized the department had accomplished most of the what we had attempted to do, and decided it was a good time to consider moving on.

While at Marylhurst, I also had leadership roles in the National Association of Schools of Music (NASM), our program’s specialized accreditation organization, serving on the Board of Directors as chair of the Northwest region, on a task-force that helped update standards for sacred music programs, on a review board for music therapy programs, and as a visiting evaluator. Each of these roles have given me the opportunity to see how various schools creatively implement national standards in ways that complement their own missions. This has served me well as I learn how things are done at PLU, working with the faculty and staff to consider improvements to an already strong program.

What are you doing when you’re not at PLU? 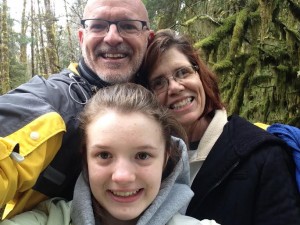 John Paul, his wife, Catherine, and daughter, Madison, like to explore the Tacoma and Seattle area.

Sometimes it feels as if there is not much free time, with all the department’s performances in the evening and weekends, and with needing to prepare for my new classes, and learning and updating (when needed) all the procedures in the department! But now I have a semester behind me, and we have finished settling into our new home, my wife Catherine, daughter Madison, and I are carving out more time to explore the Tacoma and Seattle area. We just attended our first Seattle Opera production, a stellar performance of Tosca! We like to hike and ride our bikes. My wife and I like walking on one of the ferries and spending a few hours on the water, especially if the weather is nice.  Or just discovering a new coffee place and new neighborhoods. Recently we explored the hills around Tacoma’s Old Town: loved the old houses, the views, and the elevation gains. I’m definitely enjoying getting to know the local microbrews, a reward for all that walking!

How was your first semester? What has been the best part of the new position?

It was exciting to see how true my first impressions were. This is such a gracious and welcoming place. I very quickly felt at home. I loved working with PLU students. They were hard working and they asked great questions in class. But I think the best part of my new position is seeing the response of faculty to small changes I’ve already implemented.  Our music committees have been given increased roles. They are taking up their new responsibilities with vigor and coming up with great solutions. I shared the budget with the faculty in the fall, and some discovered we had funds to bring in guest artists. As a result, James Brown, the chair of our voice program, invited Stephanie Blythe to campus in February to work with six of our voice students.  Ms. Blythe is one of the most highly regarded and respected mezzo-sopranos in the world today. The event provides our students with an incredible learning experience, at the same time advancing our reputation in the local community and the world of opera. It is gratifying to see such a small and mundane action as sharing budget information with faculty leading to an event with such great potential. This is only one out of many similar interactions that I have had with the faculty. This is a good place.