PLU Music Professor Gregory Youtz teams up with prominent Chinese poet Zhang Er, Professor at The Evergreen State College in Olympia, to create this new work around the life of an extraordinary woman poet of ancient China, Cai Yan.

In this new opera, Fiery Jade: Cai Yan, we see the collapse of a dynasty, the sack of a city and clashes between civilizations, a remarkable woman- through poetry, music and her own indomitable will- survive and aid in the rebuilding of her society. The production runs from November 17-20 in the new Karen Hille Phillips Performing Arts Center on the PLU campus.

Based upon the actual poetic writings of Cai Yan (also known as Cai Wenji) Poet Zhang Er has fashioned a timeless and universal tale that speaks to the lives of women across time and around the world who have found themselves struggling in times of upheaval. Composer Gregory Youtz has merged the musical languages of Western Classical music with deep aspects of Chinese musical tradition to create a rich musical language that speaks across time and culture.

The full-length opera production, directed by PLU Opera Director James Brown, will be performed by a talented cast of singers, with the University Chorale directed by PLU Professor Brian Galante as the chorus, and a professional chamber orchestra of 14 musicians. Central to the plot and the music is the combination of harp and cello,  working together to evoke the ancient Chinese zither called Guqin, which was played by the historical Cai Yan. The stage design by Art Giddings includes projections of luminous abstract paintings by Tacoma painter Becky Frehse, the makeup in Chinese theater style is by Portland makeup artist Ashley Bryant, who has studied in Beijing, and the costumes by Kathleen Anderson evoke China of the Han dynasty but also read as universal and contemporary. Solo choreography is by Rachel Winchester, the director of dance at PLU. 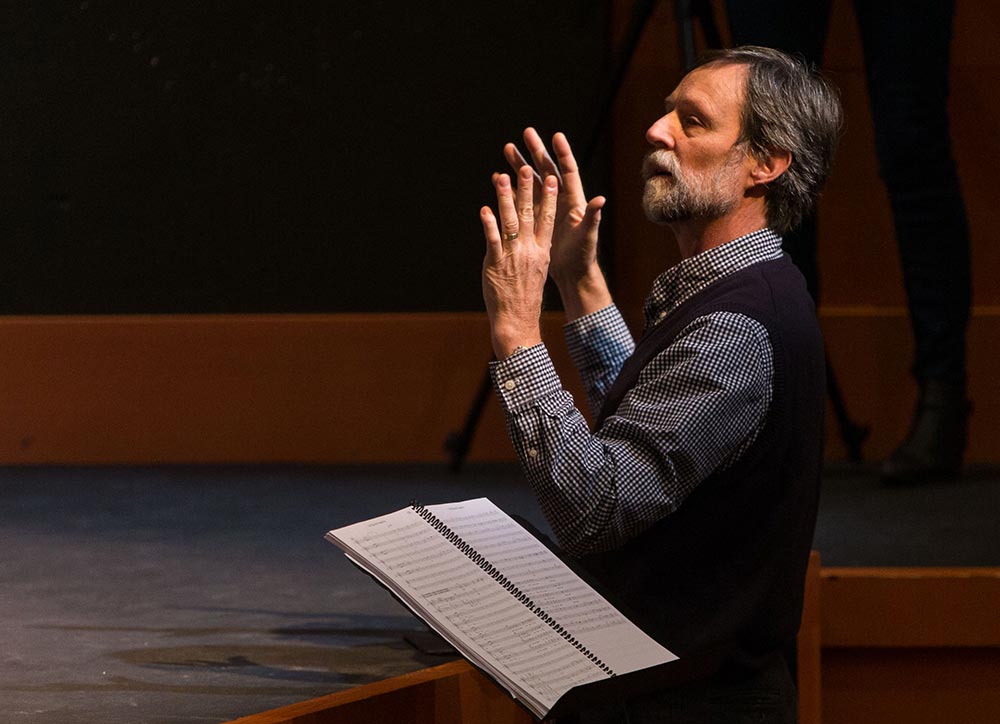 Click through for more info on this exciting world premiere.

The opera tells the story of the legendary Chinese woman poet Cai Yan who was born in 177 AD at the war ridden, violent end of Eastern Han Dynasty. It captures dramatic scenes of a woman’s life, in peace and in war, as a daughter, a wife, a mother, a poet and musician. Although the heroine lived one thousand eight hundred years ago, her story speaks to the tragedies still faced by contemporary women, such as domestic violence, losing loved ones, being abducted and raped in war, among others. Her triumph over enormous hardships blazed the trail for her contemporary followers through the similarly challenging terrain.

The opera depicts the drastic cultural and religious conflicts between Confucian Han and nomadic XiongNu, two neighboring states constantly at war during Cai Yan’s lifetime. It foregrounds the cost of war for both men and women. With increased chance of encounters among cultures, the relevance of Cai Yan’s tale is even more significant today. This work drives home the message that all ages are contemporaneous.

Additional information about the creation of this work

Librettist Zhang Er, a well-established and published poet in the Chinese language, is an avid follower of western opera, particularly new works. When she decided to explore the idea of writing an opera libretto herself, she chose the iconic Chinese woman poet Cai Yan (Cai Wenji) as a lens through which to view the experiences of women in situations of social upheaval and war. Large sections of Cai Yan’s original poems are used amongst Zhang Er’s own elegant language.

In 2011 she showed a draft to composer Gregory Youtz who has long studied and taught Chinese culture in his PLU courses and written numerous works exploring the combination of western and Chinese musical ideas. Youtz was immediately intrigued and set several scenes as experiments. Both librettist and composer were delighted with the results, but unsure whether to proceed in the absence of a guaranteed production. When PLU Opera Program director James Brown agreed to produce the work, Youtz finished his setting in the summer of 2015.

The premiere is produced in a partnership between Pacific Lutheran University and the Confucius Institute of Washington State which has generously provided funding.