The Sølvvinden Flute Ensemble’s latest project is music to our ears. 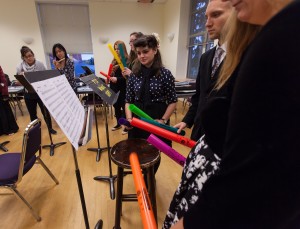 The next concert for Pacific Lutheran University’s Sølvvinden Flute Ensemble, PLU’s flute choir, will have a small but strong audience: patients at Mary Bridge Children’s Hospital in Tacoma, Wash.

“The Sølvvinden Flute Ensemble is thrilled to have the opportunity to bring the joy of music to children at Mary Bridge Children’s Hospital,” said Jennifer Rhyne, assistant professor of flute and music theory.

PLU alumna Sarah Kintner ‘14 was the inspiration for this upcoming program. Kintner was a prospective student flutist in her senior year of high school when she found out she had cancer and was hospitalized at Seattle Children’s Hospital.

Kintner, who was released from the hospital and went on to play in the flute ensemble and orchestra during her time at PLU, is now pursuing a degree in law. She told Rhyne music provided her with comfort while she was sick.

During the concert, some student flutists will trade their flutes in for colored pitched percussion instruments, while others will use bottles or the headjoint piece of their flutes to create unique sounds.

Rhyne first contacted Mary Bridge during summer 2016, and they’ve worked together since to prepare the November program. This is the first performance of its kind for the Sølvvinden Flute Ensemble, but hopefully not its last.

The Sølvvinden Flute Ensemble includes both music majors and non-majors and comprises piccolos, flutes, alto flutes and bass flutes. The group performs on campus once per semester and off campus once per year at locations including churches, festivals and the State Capitol Rotunda in Olympia.