Third Rail Inquiry: Learning, In, Through, and For Community

Third Rail Inquiry: Learning, In, Through, and For Community

The field of rhetoric and composition is sometimes misunderstood as one centered on teaching writers how to “fix” texts once ideas have been selected, produced, or discovered: first we think, then we write, then we revise. Once we have a moderately readable draft, our inquiry has come to an end.  We just need to “clean it up”—and at this point, the writing teacher steps up with resources, strategies, and rules.

In contrast to this notion of writing as “cleaning up,” rhetoric and composition posits that writing is itself a process of inquiry.  Writing begins with engagement, be it wonder, dismay, concern, fury, elation—or (seemingly) simple curiosity, a “What if?” or a “How so?”  Inquiry is the heart of writing, its generative force. When a writer tackles a condition or circumstance she deems both significant and unresolved, she has the opportunity to use writing to construct questions, engage knowledge, and wrestle with issues, to paraphrase PLU’s general education goals.  When that inquiry unfolds within a community of writers, its power resonates beyond one person’s “aha!” moment to affect how others make meaning and see the world.  As a teacher of writing, I subscribe to my discipline’s definition of inquiry. 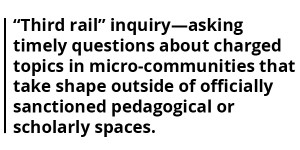 However, my understanding of inquiry in community has also been shaped by a process I call “third rail” inquiry: asking timely questions about charged topics in micro-communities that take shape outside of officially sanctioned pedagogical spaces.  They are “micro” because they remain small enough to include all the participants in conversation.  They are “communities” because they persist long enough over time to develop a culture of their own, with shared purposes, forms of discourse, and customs.

I first entered such a micro-community in 1964.  My high school was at the center of the struggle for integration in my hometown, but the origins and effects of the color line were not up for discussion in the classroom.  A history teacher created an outsider reading group that met in students’ homes, where we could discuss the essays of James Baldwin, considered too controversial for school curricula. I now understand why we never met on school property.  Twenty years later, I joined a second micro-community, established by an English professor so that graduate students could discuss theoretical texts sidelined by traditionalist faculty.  In both cases, powerful voices tried to keep discourse deemed threatening off-stage while a persistent educator found a way to keep that discourse in play.

Currently, I participate in a third micro-community, founded to engage the topic of race.  Formed in 2006 as an adult education project in a church in downtown Tacoma, the group originally intended to meet weekly for a few months to discuss Why We Can’t Wait by Dr. Martin Luther King.  Attendance expanded as local residents joined to participate alongside parishioners.  Eager to learn and magnetized by the discussion leader, a university professor of African American Studies and Communication Studies, the newcomers were at first welcomed.  But, mirroring the white pastors in King’s text, some parishioners became edgy as the conversation morphed in unexpected directions: They had wanted a discussion about race that made no one uncomfortable, and such was not to be had.  The reading group was disinvited.  Undeterred, the group continued meeting elsewhere, named itself “The Conversation,” initiated social justice projects, and articulated a mission: to build diverse, critically engaged, compassionate communities of justice and to model one such a community.  Third rail inquiry was central when I began attending in 2007, and it remains so.

So what is third rail inquiry?  It is not just a list of “dangerous” topics.  It is a process of engagement.  Respect for study and for learning runs high, but they float free of any credentialing process.  There are no exams, no term papers, no extra points for participation.  Authority, the right to speak, to critique, to redirect, to reformulate, to question, is dispersed.  It shifts about, independent of title or educational pedigree, landing wherever someone’s experience and expression converge to provide leadership on that topic, in that moment.  Relationships are untethered from the functional roles—student, teacher, colleague, supervisor—that inform institutional spaces.  Like writing, third rail inquiry begins with engagement, gains momentum from complexity and complications, and, at its best, delivers some sort of wisdom while establishing the conditions for re-engagement.  And it is timely, a resistance and an alternative to circumstances that foster suffering and to ideas that shut down new ways of thinking.