The Humanities Across Cultures: A Study-Away Case Study 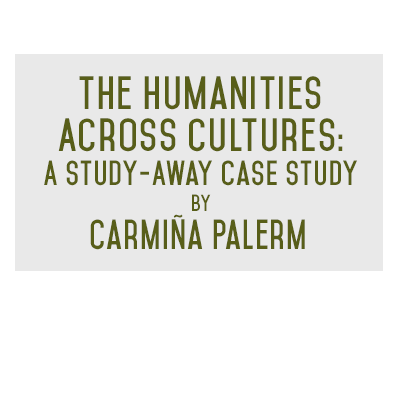 In the following text, Dr. Carmiña Palerm, Associate Professor of Hispanic Studies and Director of the International Honors Program, considers how a Humanistic approach can inform the design and implementation of a study-away course. In this particular case study, Dr. Palerm describes a class titled “American Genesis: Indigenous Texts and their Resonance” that she offered as part of the Wang Center’s Gateway Semester Program in Oaxaca, Mexico in Fall of 2012.

I had two goals in designing this course. The first was to introduce or deepen students’ knowledge of the creation stories of the Americas, and to allow them to grasp the connections between these myths and contemporary literature produced in Mexico and in Latin America. At a deeper level, I also hoped to show the students how they might utilize literature in order to reflect upon their own experiences in Oaxaca. While the first part of the course centered on ancient Mesoamerican texts, and the cultural traditions they communicated and preserved, the second part of the course dealt with the impact of the native tradition in the Americas starting in the late 1920s, in the aftermath of the Mexican Revolution. The course concluded with considerations of modern and contemporary writers as well as artists in the native tradition who share a common project of reinserting the problematic of our time into the world of native cosmogony.

The course’s site in Oaxaca proved to be particularly apt, due to the fact that Oaxaca is the most ethnically complex of Mexico’s thirty-one states — many of the indigenous peoples in the state of Oaxaca are literally living in two different times: one defined by technological progress and mobility, and the other by the stories and myths of their people.

The seminar began with a trip to the highest point in the city of Oaxaca. The historian Michel de Certeau argues in his essay, “Walking in the City,” that there are two ways of conceptualizing a city: there is the walker’s perspective and the bird’s eye view. While the walkers’ bodies experience “the thick and thins of an urban ‘text’” (15), those looking down on the city transform it into a text which lies before them.

In my course, I used de Certeau’s two ways of conceptualizing the city both as frame for the course material, and as a pedagogical imperative. That is: I encouraged students to think about Oaxaca City as a space which they had to both experience and read. Every gesture, every comment, every glance, every interaction might become representative of what’s going on beneath the visible fabric of social experiences — just as it might in reading a novel. And I encouraged them to oscillate between these perspectives of participant and observer in their own reading of the course material. This approach became the guiding principle behind the course throughout the 8 weeks.

One of the most striking examples of this came during our visit to Acteal, the site in 1997 of a massacre of indigenous people protesting for land rights by the Mexican military. Some students noted how Gabriel García Márquez, in One Hundred Years of Solitude, symbolizes the fictional state’s effort to erase collective memory of a massacre through a persistent rain, which slowly washes away all signs of the violent past. This symbolization of how historical memory can be controlled enabled them to understand, in a more profound way, what was in the process of happening at Acteal. Students expected, perhaps, to be surprised by the newness of Oaxaca. But they seemed to find that it was in the refuge of the seminar room, and through the medium of literature, where they could process the experiences they were having in a place they were inhabiting for the very first time.

Back: Humanities Today
Next: The Contemplation of the Humanities