New In Print: American Philosophy: From Wounded Knee to the Present

New In Print: American Philosophy: From Wounded Knee to the Present

American Philosophy: From Wounded Knee to the Present, by Erin McKenna and Scott L. Pratt (Bloomsbury, 2015).

This book, written as an introduction to American philosophy, also serves to challenge many perceived notions of what counts as philosophy and who counts as a philosopher.  The book explores philosophical voices that responded to moments of conflict in U.S. history.  It begins by examining two such moments: the massacre at Wounded Knee in 1890 and the attacks on 9/11 in 2001.  In both cases there were those who responded in absolutistic terms of good and evil, “us” versus “them.”  This response tends to end inquiry by providing the comfort of apparent certainty.  However, there were also people who responded to these events with a call for greater toleration, more diversity or pluralism, engaged and situated inquiry, and ongoing and open democratic processes.  These voices do not hide from the moral ambiguity and complexity of life in a globalized world—a world that rests on a history of colonization, slavery, oppression, and genocide.

The book is built around historic events and clashes and situates the philosophies discussed in their time and place.  The emergence of social Darwinism, the Social Gospel Movement, two world wars, McCarthyism, the war in Vietnam, and the “culture wars” of the 1980’s are some of the signal events.  Events like these—along with the emergence of movements to address civil rights, worker rights, immigrant rights, women’s rights, Indigenous rights, and the environment—demonstrate both the possibilities and shortcomings of philosophy as it was and is practiced in the United States. 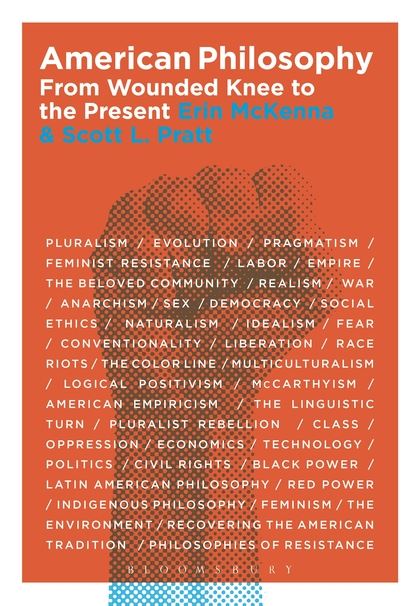 In addition to including more figures in the canon of American philosophy, this opening up of the tradition opens up philosophy itself.  Women and minorities can be seen as philosophers.  People primarily seen as activists can be seen as doing philosophy.  The daily and personal matters in one’s life (family, sexuality, sexual identity) take up new significance as they are situated in the centuries long conversation that is philosophy.  This book seeks to tell a history that encourages the discipline of philosophy to remain a thoughtful and publicly engaged discipline that can help people live thoughtful and engaged lives themselves.

Professor Erin McKenna is currently serving as the president of the Society for the Advancement of American Philosophy.