Technology as a topic of intentional inquiry in the Philosophy Department

Technology as a topic of intentional inquiry in the Philosophy Department

Questions and issues relevant to popular culture and national discourse are frequently and intentionally engaged by PLU’s Philosophy Department.  We seek to address these questions and issues as they arise and also to incorporate them systematically into the curriculum.  This year, technology has emerged as a particularly interesting subject of philosophical investigation for PLU students.  Here are some highlights from Fall 2014: 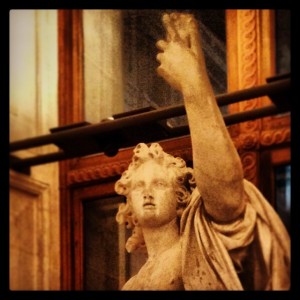 The event was organized to discuss the moral issues surrounding selfies, particularly in light of the recent controversy in which a young woman took a selfie at Auschwitz.  The panel discussed selfie taking by politicians (such as President Obama at Nelson Mandela’s funeral) and other public figures, as well as how selfies taken by private individuals raise important questions about contemporary aesthetics, the ethics of our public expressions and interactions, and ultimately how this technology is shaping our views of ourselves and others.

#GamerGate refers to the recent debate surrounding concerns about the objectivity of video game journalists and sexism within gaming culture.  The event was held at the Garfield Book Company, and the panel and audience discussed such issues as why feminism is necessary for gaming journalism, whether video games are misogynistic, and the differences between how feminists understand #GamerGate and how gamers understand #GamerGate.

Read more about #GamerGate in “#GamerGate–Is It About Misogyny or Ethical Journalism? Why Not Both” by PLU’s Dr. Nolen Gertz.

Dr. Michael Schleeter is directing philosophy majors in their capstone projects on the topic of “The Nature, Ethics, and Politics of Technology.” During Fall 2014, students questioned the common conception of technology as an instrumentum or means, which human beings use to pursue their various ends.  They also explored other questions, such as:

After these investigations, students developed their own arguments, which were presented as final papers and presentations in Spring 2015.

Back: Philosophy and Economics in Opole