Dr. Yaden, who was already experienced with online instruction, revised her Introduction to Spanish (HISP 101) to a blended format, which she taught in J-Term 2015.  Blended, or hybrid, courses mix traditional face-to-face instruction with online learning, with the total workload for students equal to that of a traditional course.  In a blended course, students have increased control over the pace, time, mode, and place for their learning.  The class met for two hours each day.  Prior to each face-to-face (f2f) meeting, students were responsible for completing various activities in learning modules online, including a short video introducing the new vocabulary and grammar, readings, and interactive activities with automated feedback. 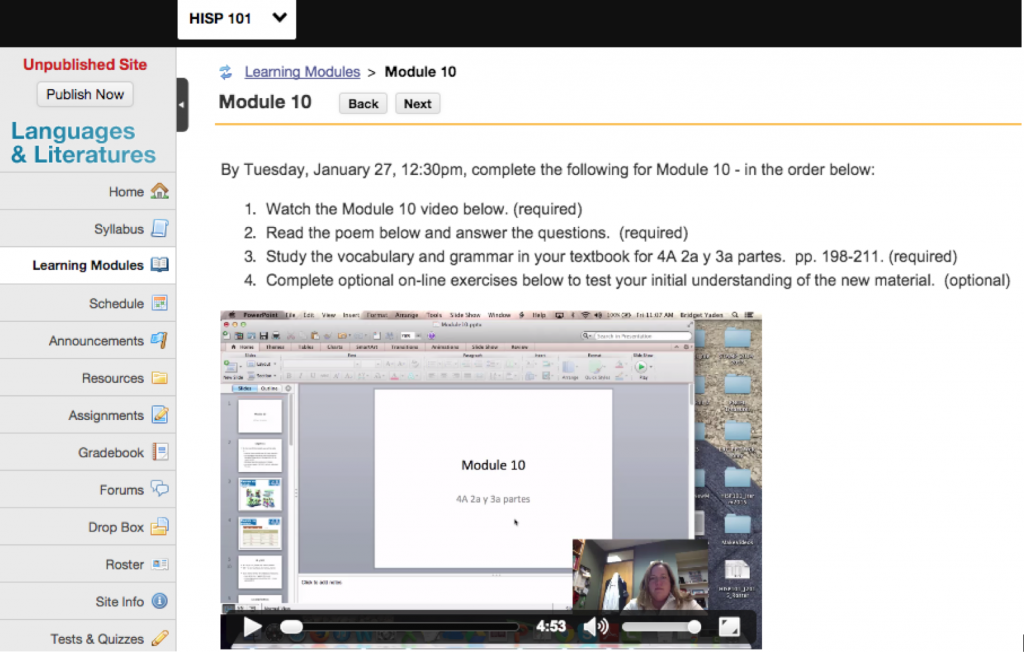 A blended course in action (Click for a better view!)

Overview of the PLUTO Institute

A mid-term survey was given to the twenty-two students enrolled in Dr. Yaden’s course, and the feedback was overwhelmingly positive, with all students either agreeing or strongly agreeing that the orientation, materials, and course were effective.  One student wrote “The online elements are working very well for me. . . [because we get] instant feedback while we still receive verbal and written practice in class.”  Another student wrote, “I really enjoy doing the online portion because I can do it at my own pace. . . . I also like the face to face conversation because it is more interactive and when learning a language I think that it is useful when you can directly talk to a person who knows the language themselves.”  Dr. Yaden will offer this course fully online during Summer 2015.

Unlike Dr. Yaden, Dr. Manfredi was creating a fully online beginning Chinese language course for the very first time.  This process was at once daunting, unnerving, and exciting.  The daunting aspect comes from the would-be course creator being obliged to think through how all these various exercises might interact and reinforce each other, as well as how to assess student learning.  The process was unnerving because, after working his way through the complex process of integrating readings, forums, screen-casts, quizzes, audio uploads, video downloads, Chinese character writing practice and the rest, Dr. Manfredi had to relinquish much of the control over the students’ actual engagement with the class, as all of their learning now happened outside of the classroom.  In other words, once students begin the process of performing exercises, taking quizzes and tests, there’s relatively little an online instructor can do in the way of adjusting assignments to fit the particular needs of the students or other emergent conditions of the course.  Fortunately, PLU has a good team at PLUTO who helped Dr. Manfredi through the planning stage as thoroughly as possible.

One of the major concerns in language study, particularly as it is administered outside of the target language country (where ambient reinforcement is readily available), is the fact that students typically approach studying in large blocks of time and therefore do not receive enough repetitive reinforcement outside of class.  The most exciting thing about online language study, then, is how the multitude of exercises, both active and passive, can be accomplished using a variety of media platforms (e.g. mobile phones, computers, mp3 players, etc.) that are built into one’s daily routine in a way that traditional language study is not.

Through these innovative Chinese and Spanish language courses, the Department of Languages and Literatures hopes to encourage PLU students to jump-start their language study and inspire them to continue in that language on campus in the regular academic year.

Back: Community Learning Through Endowed Lectures