The Importance of Global Research: The Guatemalan Genocide

By Ashley Carreño-Millan '20
Division of Humanities

Riley Dolan, ‘19, a double major in Hispanic Studies and Political Science, interned with the U.S embassy program during the summer of 2017. This internship opened the way for him to engage in a project  researching memory sites that commemorate the genocide of Indigenous Mayans in Guatemala.

What are memory sites? These are sites created by citizens or the government in remembrance of an event. The memory sites that Riley studied commemorated the Guatemalan Genocide. In the early 1980’s, the lives of Indigenous Mayans in Guatemala were at risk. Many died when the government conducted a scorched-earth counterinsurgency tactic that included the genocide of five Indigenous Mayan groups. Such a brief summary cannot capture the impact of the genocide. Although it has been more than 36 years since the genocide, Guatemala still feels its effects today.

When Riley applied for an internship at a U.S embassy program, he was able to get his first choice of a country to work in: Guatemala. The cost would be high for travel and expenses, but not one to be deterred, he was able to obtain a PLU scholarship for unpaid internships. In addition to the internship, he wanted to conduct a research project while abroad. He reached out to the Hispanic studies department, and  Professor Carmiña Palerm worked with Riley to identify a topic for his research: the memory sites that had been created in remembrance of the genocide.

In an interview with Riley, I asked him why this topic resonated with both of them. “For my final paper in HISP 301, I had written about the Guatemalan Memory Sites. But I could find no scholarly sources about these monuments in Guatemala and no sources on how the Guatemalans are dealing with the memory and aftermath of this civil war that ended in 1996.” 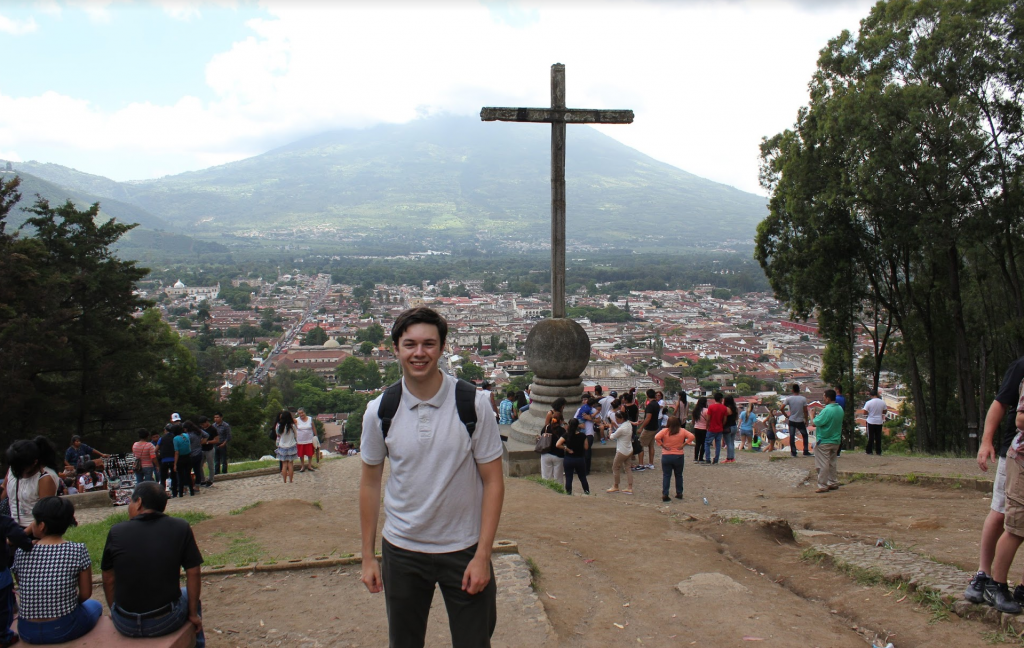 Excited to be be able to learn more about these sites, Professor Palerm and Riley decided to prepare for the trip. They were able to find assistance through the Kelmer Roe research fellowship and a Wang Center research grant. Unfortunately, Proffesor Palerm could not go with Riley to Guatemala, but she kept in constant contact with him as he completed his internship work in the Embassy while also finding the time to visit memory sites. During his stay in Guatemala, he was able to visit various sites with a clear goal in mind.

“I would go to these monuments, observe them, and then hang out a bit and try to make observations about how people were interacting with these monuments,  How accessible are they? What information do they convey? And then the big question was, how do these monuments portray the conflict that occurred?”

One of his findings was that “the government-funded urban monuments have this general ‘moving on from the conflict’ mentality. An example is a monument in Guatemala’s National Palace that is dedicated to ‘the anonymous heroes of peace.’ Then, in stark contrast, in some of the rural villages that I was able to visit, there are monuments that are specifically for the people who were murdered by the government.”

Riley soon discovered that these sites were not accessible to the average visitor. He would spend extra time following old maps, asking locals for directions, and searching for monuments. When he compared the coordinates provided online with the actual location of the sites, he found that the online coordinates were incorrect, and not just by a couple of miles. The sites existed in completely different locations than had been indicated. Part of his project is to improve accessibility by collecting the GPS coordinates of the sites that he was able to visit. 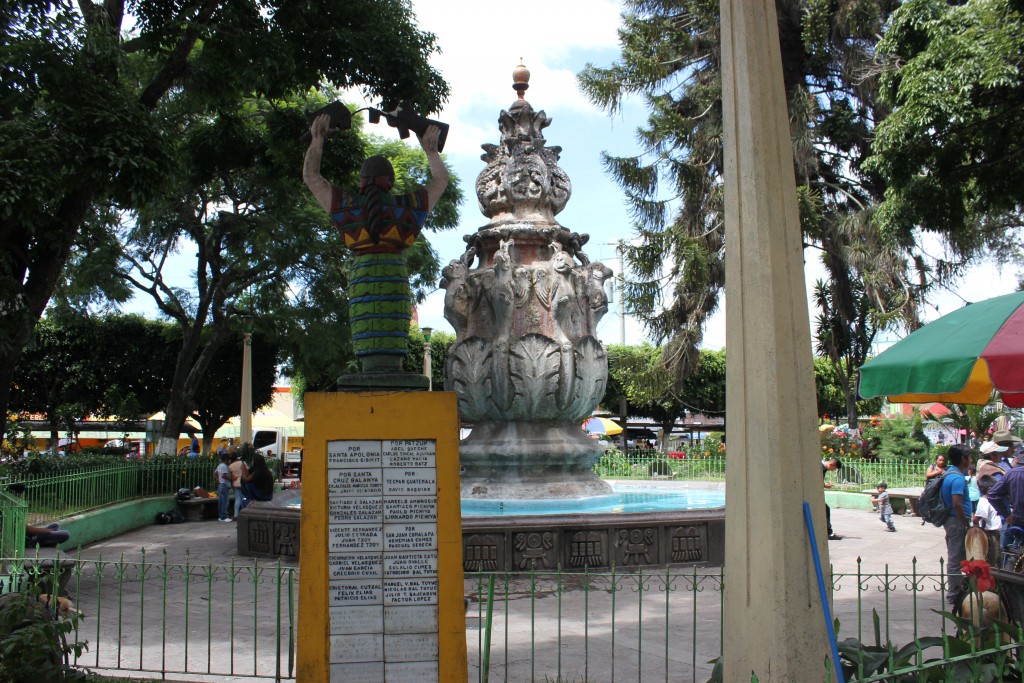 The names on the back memorialize those killed in Chimaltenango, Guatemala, where this monument is located.

Once he returned in Fall 2017, he utilized the new Digital Humanities (DH) lab and worked with Professor Adela Ramos, Department of English, and Joshua Smith, Instructional Technologies Systems Administrator and DH  lab volunteer, to create a digital map to accurately geo-locate these sites. Here is a link to their work:

Not only has Riley helped create this map, but his Hispanic Studies capstone project revolved around his research. In addition, he has presented his research in several HISP 301 classes, at PLU’s Undergraduate Research Symposium, and at the Honors Symposium at Seattle University. 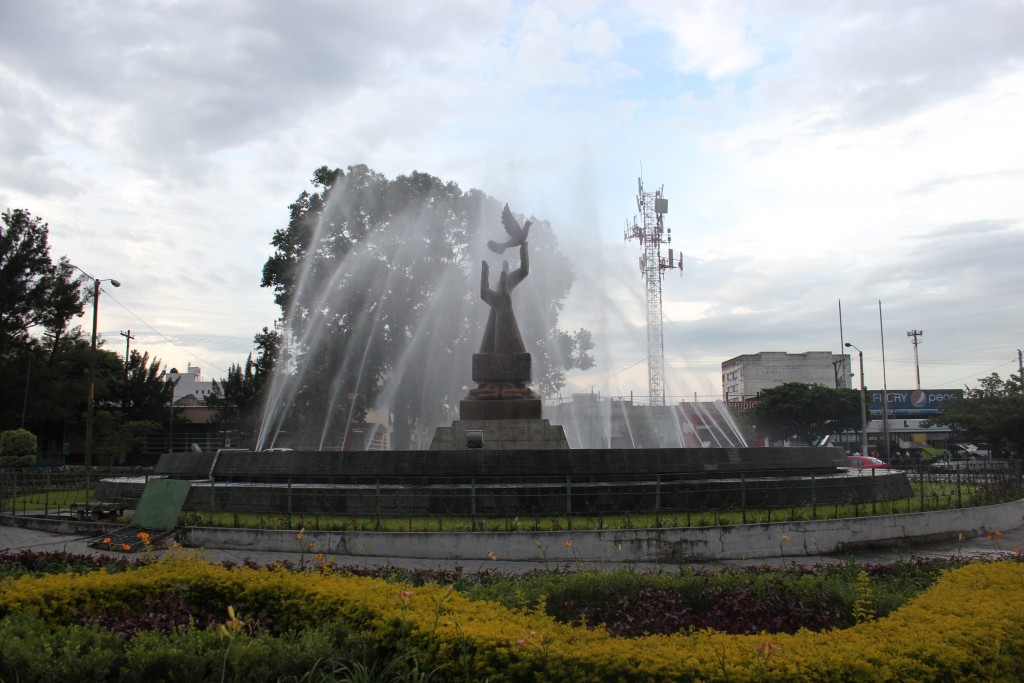 Another monument located in Guatemala City. All photos courtesy of Riley Dolan.

Time in Guatemala opened up new opportunities for Riley. In addition, he has noticed the effect of his research on others: “I have also heard from multiple students that they really enjoyed the presentation, because it makes it more of a reality that this is possible for all students to do… they can actually see a personal experience.”

Professor Palerm and Riley Dolan are grateful for all the support that PLU has given them to conduct their research and for the donors that made the scholarships and grants possible. Riley is now able to continue his research after he graduates because he has been awarded a Fulbright grant to teach English in Guatemala! Currently, approval is pending regarding support for his research side-project, which would allow him to continue to map the sites and explore how these sites are commemorating the conflict.

Having the opportunity to study abroad was very important to Riley, and he encourages PLU students and alums to seek such opportunities. Researching while abroad had a particularly big influence on him, inspiring him to take a closer look at foreign governments, genocide studies, and digital mapping. Research in itself can open new avenues for anyone, and can inspire and support a cause worth fighting or defending. That’s why it is important to conduct research: the experiences gained through meaningful global research are life shaping!

Ashley Carreño-Millan is a PLU junior, with a double major in Hispanic Studies and English Writing.  She is a Diversity Advocate for commuter students and Assistant Director of the Parkland Literacy Center. She completed this article as part of her work in English 320, Intermediate Creative Nonfiction.