Every year, nine thousand students worldwide join Sigma Tau Delta, an English Honor Society founded in 1924. This international group of readers and writers engages in formal and informal discussions about literature, fosters literacy education through outreach programming, and celebrates the impact of words on culture and experience.

In the 2014-2015 academic year, Sigma Tau Delta made its way to PLU. PLU students and faculty have joined a conversation that other chapters have begun, and they are building a new community on campus—a place where students and faculty can continue asking questions, studying literature, developing their writing, and building camaraderie with one another. The hope is that this community of Lutes will help strengthen the spirit of the PLU English department and welcome others to further the appreciation of writing and literature outside the classroom.

The process for establishing an honor society is not always a swift one, and during Fall 2014, there was much planning and anticipation as the society was established. In October, students were invited to learn about Sigma Tau Delta and to begin brainstorming ideas for the club. In November, students read Jorge Luis Borges’ “The Library of Babel,” a short story that reflects on the vastness and the limitations of words, the search for truth in literature, and the purpose of writing itself. After reading the piece, the students held a discussion that allowed them to break down the text and apply it to their own journeys as readers and writers.  It was a perfect prelude for many discussions to come. 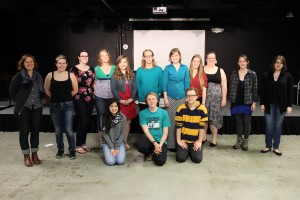 In January 2015, the group was officially recognized as an honor society on PLU’s campus and prepared to initiate its first application process as the Alpha Upsilon Sigma chapter of Sigma Tau Delta. Our plans for the group include participation in conferences near and far; discussions of common reading books; mentorships for other students in the Parkland/Tacoma area; workshops for members’ writing; and trips to local publishing houses. Within the PLU sphere, we intend to fully support and participate in the Writers’ Workshop series and the publications of Saxifrage and The Matrix.

Back: 10 Years of the Visiting Writer Series
Next: Appreciations