By Autumn Robbins '20
Division of Humanities

Both courses are dedicated to reclaiming the language and the current culture of the Coast Salish region. The instructor, Professor Nancy Jo Bob, oversaw instruction in  Southern Lushootseed language and  the culture embedded in the language during her seven years as the service coordinator for the Puyallup tribal language program.

In 2012, Professor Bob began working with Dr. Troy Storfjell, Professor of Nordic Studies, and other members of the Native American and Indigenous Studies [NAIS] working group to design PLU’s NAIS Interdisciplinary Minor. Professor Storfjell, a dual citizen of Norway and the US and raised largely in Norway, is Sami. The Sami are an Indigenous people whose homeland is now part of the northern portion of Norway, Sweden, and Finland and the northwestern corner of Russia. He had identified striking similarities between the language history in the Coast Salish area of Washington State and that of his own Sami people, as languages in both areas preserved traditional knowledge while also being affected by the impact of settler colonialism. So he invited Ms. Bob to teach the Southern Lushootseed language as part of the NAIS minor. 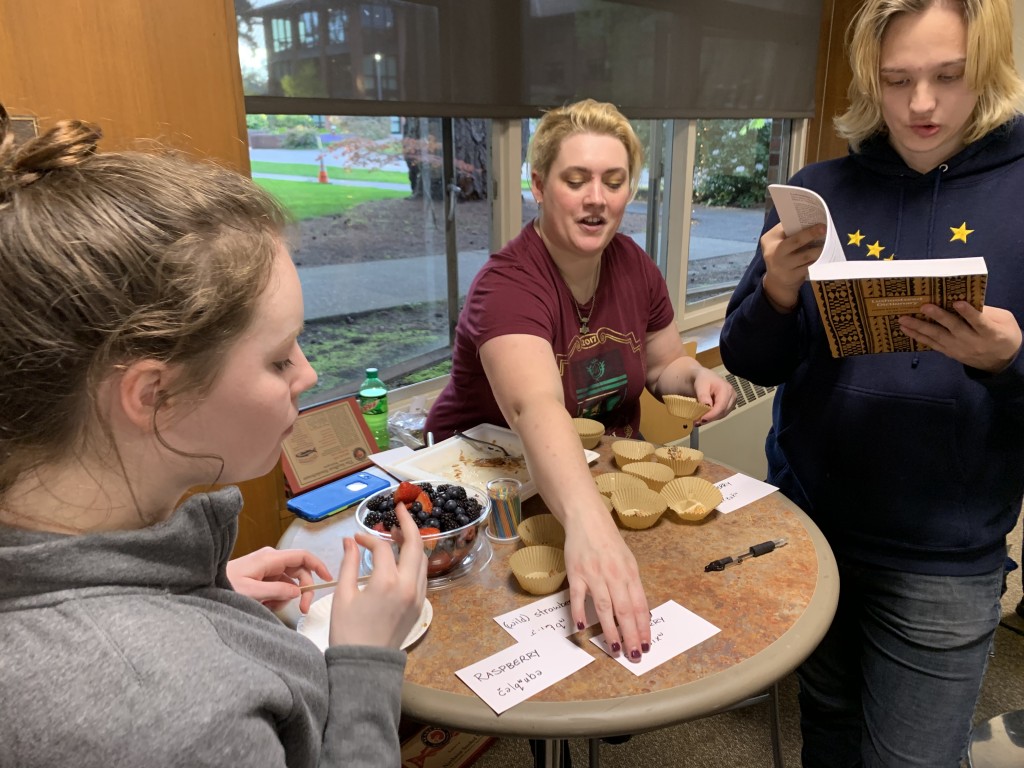 Professor Bob agreed to teach at PLU, recognizing an opportunity to reach out to a portion of the community as yet unaware of the local Indigenous language and culture.  Through the study of Southern Lushootseed, a gap in cultural understanding could be bridged. Her teaching goals are threefold: 1) to teach students about the local Southern Lushootseed culture; 2) to help them see that modern problems are connected to language and community; and 3) to revive the language and the aspects of the culture that were undermined during the slow erosion of the language due to oppressive measures taken by the dominant settler regime.

In this course sequence, SOLU 101 and 102, students explore the history of the language as it has evolved from the petroglyphs dating back several thousand years to the adoption of the International Phonetic Alphabet for the purpose of standardizing written Southern Lushootseed in the 1970’s. Students also study the phonetics of Southern Lushootseed.

The language has its origins in the area that is now part of British Columbia in Canada and the Pacific Northwest in the United State — linguists cannot pinpoint its origins more closely than that. Today the Southern Lushootseed language is known in both written and oral forms by seven Native American tribes: Duwamish, Muckleshoot, Suquamish, Snoqualmie, Puyallup, Squaxin, and Nisqually. The orally-transmitted Changer Story is a narrative about how the language was a gift to the people, a gift that changes based on the needs of the people over time.

With the new course now in session, PLU is inviting any students wishing to be closer to the Indigenous community to participate in events on campus such as World Language Day so as to learn something new. Professor Bob would also like for the entire Parkland/Puyallup community to participate in in-class activities designed to assist in reviving the language and rebuilding the connection to the Indigenous community. She wants PLU students and Indigenous students to take pride in contributing to the revival of the language and the culture.

Ms. Bob explains: “Everyone has something to contribute to keeping our language alive. No one should be excluded from learning our language. It takes 10,000 people speaking a language to revive it. We need more people speaking Southern Lushootseed. And we need to connect with Indigenous peoples all over the world, people like the Sami, so we can learn from each other how best to revive and sustain languages in danger of disappearing.”

PLU regularly incorporates the overall culture of a language’s region into language courses. In the class on Southern Lushootseed, culture is taught as something inherently embedded in the language, so lessons on culture are incorporated every day. Professor Bob intends to expand the cultural aspect to be more noticeable and a source of pride, similar to how it was before Southern Lushootseed was stripped from the Native peoples. Her goal is to revive the language, not as an historical artifact, but as part of our current environment.

The reasoning behind teaching the culture as something inherently embedded in the language is that when the language was stripped from the people, the culture embedded within the language went dormant. The Southern Lushootseed culture has evolved using English as the basis of communication. By teaching the cultural dimension in this way, Professor Bob can get her students to think about the relationship between the history of her people and the Southern Lushootseed language in the same way that her ancestors may have.

Professor Bob has always been fascinated by the ways in which all languages are connected to the world we live in. This course is one way she can share this fascination with others. And teaching at PLU is also another step forward in realizing her dream of having Southern Lushootseed taught in all schools alongside English because it is one of the first languages on this country’s soil.

Autumn Robbins is a PLU junior, with a major in English Writing and a minor in Publishing and Printing Arts. She completed this article as part of her work in English 320, Intermediate Creative Nonfiction.