Waist-Deep in Mud: Engaging with Tradition through a J-Term Course in Honolulu

Waist-Deep in Mud: Engaging with Tradition through a J-Term Course in Honolulu 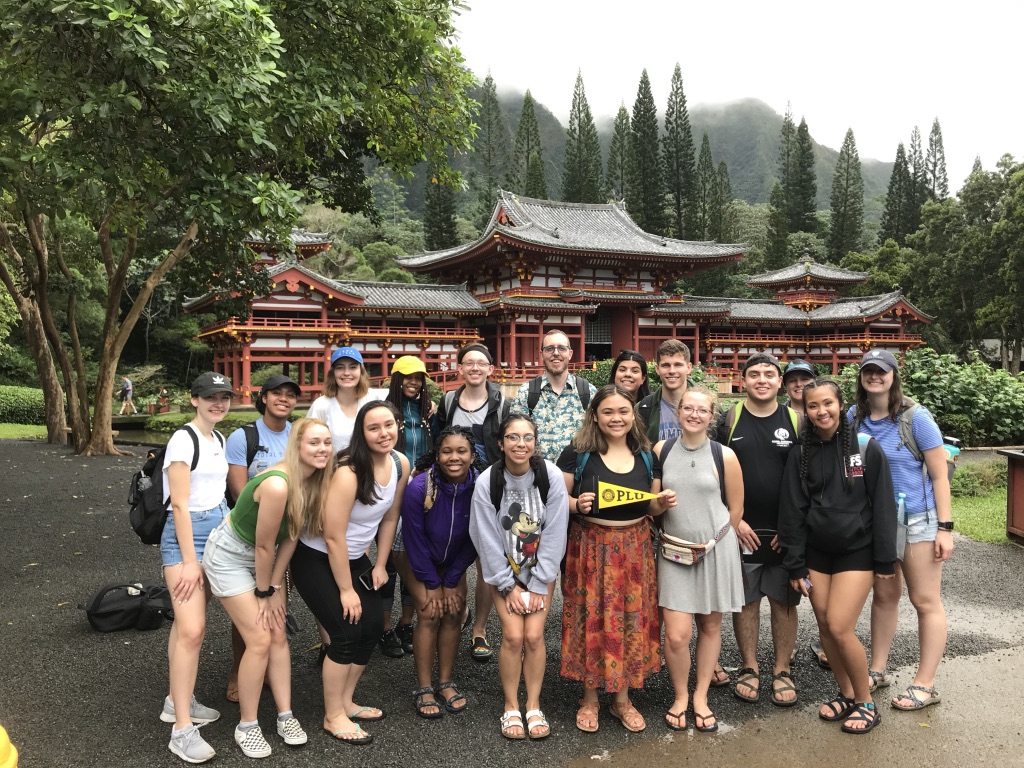 On a January morning, sixteen PLU students stepped waist deep into the flooded, muddy field of the loʻi, a traditional taro patch, to take part in a practice that once sustained the Hawaiʻian people.

Elle Sina Sørensen, a senior majoring in anthropology and global studies with a minor in Native American and Indigenous studies, remarked that the time spent pulling weeds at the loʻi was “probably one of the most incredible things [she had] ever been able to take part in.” Although the mud was off-putting at first, she soon began “enjoying being so close to the plant and to the earth.”

Wading through the mud on a traditional Hawaiʻian farm is a long way from the whitewashed beach vacations that define Hawaiʻi for most mainlanders. But through Dr. Erik Hammerstrom’s J-Term course on East Asian religions in Honolulu, PLU students had the honor of experiencing a tradition far older and more meaningful. 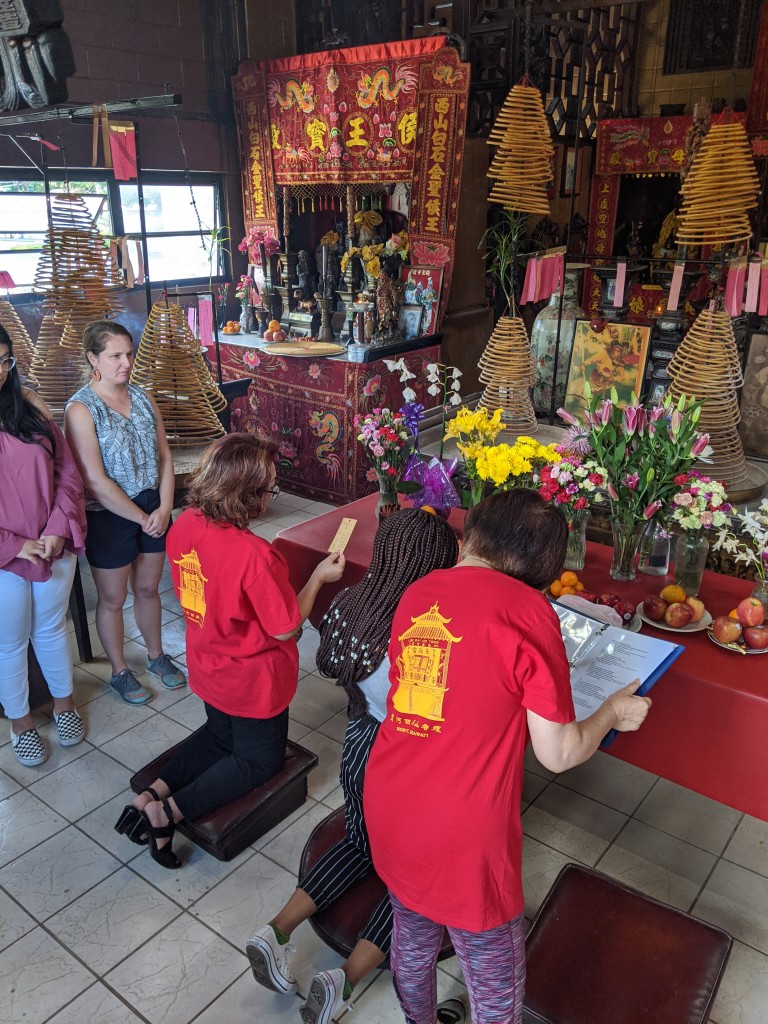 Long before Japanese, Chinese, Korean, European, and other sailors set foot on Hawaiʻi, Polynesian settlers made their home on the isolated islands. From the land and the water grew traditions and legends. One such tradition is the cultivation and consumption of kalo, or taro, which was once the most prevalent and important staples of the Native Hawaiʻian diet. This plant consists of three parts, the kalo (corm), the luau (leaves), and the huli. This miraculous complex carbohydrate is sturdy and packed with nutrients, vitamins, proteins, and starch.

For Native Hawaiʻians, kalo is far more than a source of nutrients. According to legend, Wakea (sky father) and Hoʻohokulani (daughter of Wakea and earth mother, Papa) have a stillborn son, Haloa-naka, who is buried and from his body grows the kalo/taro plant. The plant is also named Haloa, meaning everlasting life. Wakea and Hoʻohokulani then have another son, a human named Haloa, after his brother. From Haloa descends the Hawaiʻian people, making kalo the elder brother of Native Hawaiʻians.

Dr. Hammerstrom, who originally launched this course in 2014 “to give students real-life experience with the various religious traditions of East Asia,” continues to add more activities like the loʻi to integrate the indigenous cultures of Hawaiʻi into the course with the Diversity Center’s Nicole Juliano, who has helped lead the course during its past two iterations. When they are not waist-deep in Hawaiʻian tradition, Dr. Hammerstrom and his students take advantage of the diverse breadth of religions and traditions represented in Honolulu, including Buddhism, Daoism, Shintō, Confucianism, folk religion, and Christianity. From visiting churches and temples to Zen meditation workshops, students witness and participate in the ordinary, everyday activities that uphold and honor the traditions of these religions. 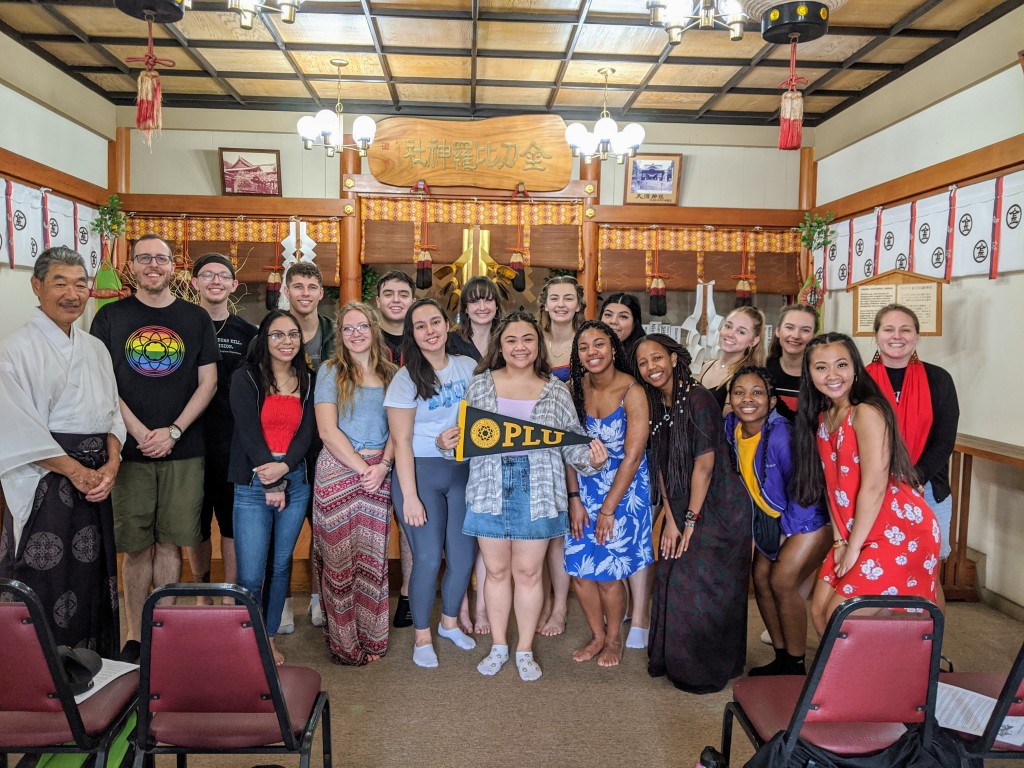 Because Hawaiʻi is seen as a tropical vacation spot, many people come and go, ignoring the complexity of the cultures and peoples who struggle daily to foster and practice their religions. For Katherine Sinclair, a senior nursing student, this course offered the opportunity to dig into the history and diversity within Buddhism. Specifically, she learned how hard Japanese sugar plantation workers fought “to keep their religion prevalent” and “how many variations there are in Buddhism specifically.” Sørensen further shared how all the religions “mingle and intertwine within different cultures and different countries… in a way making their own melting pot.”

Stepping into the muddy, complicated history of Hawaiʻi can be off-putting at first, but it is the only way to gain the incredible experience that respecting and learning about another culture can bring. As Dr. Hammerstrom says, this course is about making “choices that support local people and the land.”

After the arrival of Captain Cook and western colonizers, the once prevalent cultivation of kalo dwindled dangerously while Native Hawaiʻians were killed by Western diseases and their land was stolen and repurposed.