Dr. René Carrasco is the new Assistant Professor of Hispanic Studies, who began at PLU in Fall of 2019.

Originally from Mexico City, René came to the United States when he was 15. After he graduated high school, he went on to community college and studied history and literature. From there, he went to the University of California and studied Latin American History and English Literature. His plans changed, though, when an advisor asked him why he wasn’t studying Latin American Literature instead of English Literature.

Carrasco earned his PhD in Spanish American Literatures from The University of Texas at Austin in 2015. During his studies, he developed a range of research interests, including Indigenista discourse in México and Latin America, Mexican literary studies, colonial/decolonial studies; and philosophical thought in Latin America. Before PLU, he was most recently working at Harvard University, where he was a College Fellow teaching courses in the Department of Romance Languages and Literatures and the Faculty Director of the Latinx Studies Working Group in the Committee on Ethnicity, Migration, and Rights. He is currently revising his book manuscript, Grammar of Redemption: The Logics and Paradoxes of Indigenista Discourse in Mexico. 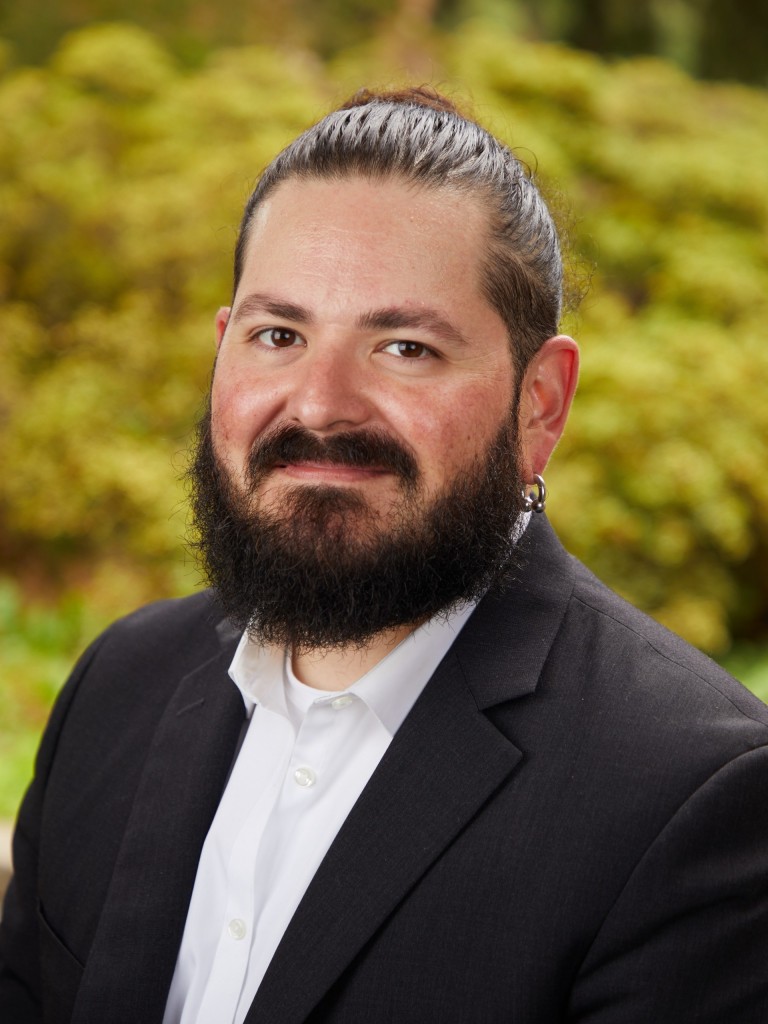 HS: Why are you interested in Hispanic Studies and history?
RC: Everything about where we live today, everything about this world, was made by humans. It was made by us. Our language, our culture, our identities… everything. Politics, borders or the lines that separate one country from another, gender roles, everything in this world was made by
humans. And just like it was made by humans, it can be un-made, and new things can happen, it is entirely possible. This civilization project and its order, its hierarchies, its structure, is not divine, it is not naturally like this. It has a story, a history. A reason. Once you understand that, then you can begin to change things, and hopefully make them better.

HS: Why study language?
RC: First of all, I think that one of the problems in the United States is that people don’t want to learn other languages. Most people don’t know other languages. I grew up in Mexico and you had to learn English. You just had to, for a variety of reasons, some good some not-so-good. And in other countries, like a lot of European countries, people know three, four, five languages because they’re in contact, because of the European Union and the way traveling works, you know, because of its closeness. In the United States, this phenomenon does not take place, despite the fact that there are hundreds of different cultures in constant contact with each other. Most of Spanish, English, French, Italian, all these languages sorta come from the same linguistic family, from the same geographic area, and share a worldview, that is, an idea of the world and of the life in it. But, like, indigenous languages are completely different. Perceptions of time, perceptions of being, concepts of geographic and spatial awareness, the very notion of how we are in the world, they are all different, different than our own perspective. And you can learn all of that when you learn a language. The metaphors, engines of language, that they use to describe things, are entirely different. Once you learn that other people see things differently you go “Holy crap. Maybe the way that I see things has a reason, a history and there’s a why to the way I think and perceive the world.” I feel like everybody should learn another language. I feel that what learning another language does is super important to our development as humans. Learning and understanding language as a network of meanings and a system of communication; learning how language shapes our world view and everything, and how it actually works, all of this is super important. Learning another language sheds light on your own language, your first language, your mother tongue, and it opens crazy worlds, crazy opportunities. I mean, in terms of, like, travel, in terms of what music you can be exposed to, what movies, TV series, what cultural production you can come into contact with and learn from. It just opens the floodgates of knowledge and culture. I never said this to my students because I didn’t have the chance to, but I had a couple students in my HISP 301 class last semester that were enrolled in the School of Nursing. And I was thinking about the importance of studying narratives, and how important it can be in the field of healthcare. When you talk to a patient, how do they communicate their ailments? Like, how do they tell you what happened? How did they get hurt? What is the reason that they’re here, what happened? What happens, then, is that the patient starts weaving a narrative. “Well I was doing this… and then this happened… which then led to this… my diet consists of this… the history of disease in my family is…” etc., etc. The patient puts together a sequence of events that explain their situation and what brought them to seek help. And then the nurse, depending on their level of competency, and the degree to which they understand narratives, can be like, “well no, sir, or ma’am… that didn’t happen because of this, it happened because of this and this,” and so on and on. All day long nurses are dealing with narratives. Then, of course it makes sense that nurses study narratives. Don’t even get me started on what learning another language would do for somebody in the business world or in the nursing environment itself or other fields not often associated with the learning of languages. It’s super important.

HS: What do you hope students will leave your classes knowing?
RC: If anything, I would like students to understand, to remember, what I was telling you earlier about how everything is made up. History, what the hell is history? It is a controversial stand, but I will maintain that, as discipline, there is no such thing. In fact, all the disciplinary divisions between the humanities are more imaginary than real. They began earlier last century and their mission to divide knowledge has continued to thrive… but that’s another story. I was saying, History is subjective, it’s all about perspective. It’s about power dynamics. What we call the “official history”, what is it? Who wrote it? For what purposes? In whose interest? One of my favorite historians, Marc Bloch, was already asking similar questions last century. We get subaltern histories, like in India, or histories against the grain in the Benjaminian sense, or history from other perspectives, other narratives. That’s also beautiful, to understand history as narratives. One of the great moments in a college career – of which, trust me, there are many – is when we understand that historical events, by themselves, in and of themselves, are somewhat meaningless. It is through our narrative that we put them together, that we string them together, and provide them with a sense and a meaning, and in doing so, we turn them from events into processes. And there is always a logic to narratives, a logic that shapes them and gives them purpose. Understanding those logics is also important.
That’s why history and literature are so similar, because it’s all narrative. It’s all about who is talking about what, you know? Once you understand that and you analyze it as a narrative, very interesting things happen. You discover, or un-cover, the power dynamics and the violence behind it all. The critical history of History (a version of historiography) would tell the story of how that violence has become structural and institutionalized. Both history and language have elements that make them beautiful, interesting, and urgent. From what I understand, here, at PLU, there was a proposal floating around that sought to remove, among other things, the languages as a requirement for students in business or nursing or other fields of study. But, when I heard about this, I was like, no way. Languages are at the core of the liberal arts, at the core of us as humans, because, as a colleague of mine pointed out, while we’re sitting here talking about this, I’m not speaking to you in numbers, or in computer code, or anything else. I’m using metaphors and words… language. I am weaving a narrative. It seems so obvious, so fundamental, to hold on to (and strengthen!) language programs across all the universities and colleges in this country.
HS: Thank you for talking with me.